Churning through Ulysses on a second floor balcony beneath the looming façade of Notre Dame, I was interrupted by a pianist hammering out rhythmic jazz in harmony with a frenzied drumbeat from below. Following the staircase down to the piano, I encountered Camal, the bookshop’s carpenter. His toolbox lay locked at his side; instead of repairing the two poetry shelves that had collapsed the day before, he sat on the corner stair beating a make-shift drum in time to the pouring summer rain. Instead of facing the indignity of walking drenched through Saint-Michel, Camal was waiting out the rain inside the shop. I sat down on the top stair and, following Camal’s lead, enclosed within its doors, decided to surrender myself to the peculiar melody of Shakespeare and Co.

Some weeks before, on my arrival at the Parisian bookshop, I had pushed through the swarms of awed customers and asked for Sylvia, Sylvia Beach Whitman. I would begin my stay in her bookshop that evening. A thin-framed woman stood behind the vintage cash register, surrounded by the summer horde of American tourists, all of whom were overwhelmingly relieved to speak English with the Australian-accented manager. Eli that I am, I expected Sylvia to descend from her manager’s office and offer a full orientation on the rules and regulations of the shop. As I would be sleeping there, I assumed that a few expectations would be established. Yet I quickly realized that control and organization were antithetical to the bohemian lifestyle of Shakespeare and Co. I was to read, and I was to write. In exchange for this intellectual discovery was a mattress, located right in the center of Paris. According to my official title, I was a “Writer-in-Residence.”

Sleeping overnight in a bookstore encapsulated all of my fondness for folios and octavos, even for the paperback. Yet not any bookstore would satisfy me—I had to sleep overnight in Shakespeare and Company.

Though Shakespeare and Co. attracts some tourists because of its consistent listing in Paris guidebooks, most overlook this hidden treasure tucked between the bustling markets of Saint-Michel and the flying buttresses of Notre-Dame. This small bibliophilic sanctuary is known for its eclectic collection of English novels in a country which vigorously promotes all things French. It also serves as a haven for wandering and penniless writers who are allowed to sleep among its shelves for free.

When I first heard of the opportunity, I was skeptical. Perhaps it was possible for a beatnik, but not for me, not now. Even the most unconventional modern hipster, I thought, would not hitchhike across Europe without a mapped-out plan or sleep in a grimy and soiled bookshop just for the sake of adventure. Yet according to the store’s owner, George Whitman, over forty-thousand people have slept in his shop over the years. I went to Paris determined to become the next.

One cannot know Shakespeare and Co. without knowing George. A 93-year-old man who retains a remarkably lucid memory and a propensity to burst into a tyrannical rage, George is a living legend whose presence in the shop inspires both awe and fear. He occasionally descends from his apartment on the third floor—a space he calls “The Museum of the Lost Generation”—and sits out on the wooden benches lining the façade of the shop, picking up three or four of the rejected used books, insisting that all of them have something worthwhile to offer. A staunch socialist and a consummate host who lives by the adage, Be not inhospitable to strangers, lest they be angels in disguise,he first allowed complete strangers to sleep in his bookstore in 1951.

George is the second owner of Shakespeare and Company; Sylvia Beach Whitman, his daughter, now manages the shop. The original bookstore, located in the heart of l’Odéon, was established by Sylvia Beach in 1919. Her lending library of English books quickly became the refuge for all of the expatriate writers of the Lost Generation. Hemingway, Fitzgerald, Pound, Stein, Joyce—they all congregated in her shop, which became the center of literary culture and innovative ideas.  Hardly by coincidence, all of the books banned in England and America—most notably, Joyce’s Ulysses—were readilty available in Sylvia’s shop. After Anglophone publishers rejected the monumental text as pornographic, Beach decided to publish it out of Shakespeare and Company.

The shop closed after the German occupation of Paris during World War II. Hemingway himself liberated the store when he entered Paris with the American troops in 1944, but it was years before it re-opened across town. George felt he had the prerogative to reestablish the store, recreating a literary haven where young writers could gather, discuss, and create, while living in one of the world’s most stimulating cities. A second generation of lost writers gathered in George’s bookshop, everyone from the last modernists—Henry Miller, Anaïs Nin, Richard Wright, and Samuel Beckett—through the first Beats—Allen Ginsberg, William Burroughs and Lawrence Ferlinghetti. George restored Beach’s literary sphere, but this time according to his Marxist credo: Give what you can; take what you need.

I entered George’s utopia and fell into the rhythms of the shop’s exceptional lifestyle. On my first day of residence, I passed underneath the green front doorway and was confronted with a chaos of books, lying strewn in every possible direction. Books extended up to the edge of the rotting ceiling and crowded into splintered wooden shelves so unstable that one could not pull a spine off the shelf without fear of collapse. Pyramidal piles of books were stacked in corners, stuffed into suitcases like dirty clothing, or thrown, rotting and dismembered, into bins outside the shop, as if some unsuspecting tourist would fall in love with the flimsy paperbacks and purchase one. Interspersed throughout this mayhem were seven mattresses, comfortably awaiting the fatigued residents of the shop once those green doors closed at midnight.

During my stay, the shop hosted anywhere from three to ten writers each night. We obediently helped open the shop at midday and close at midnight. For two hours in between, we worked in the store—a sort of work-study program as part of our invitation to stay. One afternoon, while I was shelving literary nonfiction, a delicate model entered the bookshop, picked up the nearest Tiffany-blue hardback and pretended to read—a pose for her shoot. I felt eerily analogous to Audrey Hepburn in Funny Face, covered in the grime of dusty book jackets, scripted to the role of the bookworm in opposition to the liberated and vivacious Fred Astaire.

Each morning, the resident writers wearily strolled across the street to Café Panis, where the waiters behind the bar distinguished us from the Notre Dame tourists by our bloodshot eyes, our dirty clothes, and (above all) our greasy hair. We quickly gulped down the one euro café at the bar: cheap but strong. After that, we went our separate ways—heading upstairs to the library to fulfill George’s bidding that we read a book a day or sitting down at an ancient typewriter, attempting to write amidst all the customers disturbing our temporary home. We would reconvene at midnight and retreat upstairs to the library, pop open the cheapest bottle of wine that Franprix offered, and let our thoughts flow. We positioned ourselves amidst the books and talked into the wee hours of the morning. Some nights, the conversations were more intellectual—discussing the absurdity of French deconstructionism, Ted Hughes’ influence on Sylvia Plath, or the ways Walter Benjamin’s theories on art applied to Paris’ constantly-clicking tourists. Other times, we simply laughed uncontrollably at YouTube videos or mentally prepared ourselves for our en-masse excursion the next morning to the free public showers.

George was a prominent fixture during my stay. I recall fondly the morning when I was allowed to “shower” in George’s bathtub, pouring a pan of hot water over myself, terrified of the ubiquitous cockroaches squirming throughout his apartment, or of seeing George himself, a notable ladies’ man, spying on me through the stained glass windows that lined the tub. I gained the ultimate satisfaction one Sunday afternoon when I was privileged to be George’s “Tea Lady.” I served tea to his friends, his dedicated followers, and even the random customers who gathered in his tiny apartment every Sunday at four o’clock. His crass voice rang into the narrow hallway, inquiring as to whether everyone had a cup of tea and a madeleine. Moments later, he strode into the room, still dressed in his blue polka-dot pajamas with his wired grey hair pointing in every direction.

Beyond feeling compelled to live in Shakespeare and Co., I wanted to read Ulysses in the bookshop that published it. I managed to hew my way through Joyce’s jumbled narrative, sitting on the second-floor windowsill, looking across the Seine to Notre Dame. Yet reading the monumental epic didn’t have the profound effect I had anticipated. The bookstore changed me more than its colossal publication. It fulfilled my deep-rooted desire to be bohemian; to throw away my planner and Post-It notes and merely live by the hour; to no longer be the collared-shirted, trousered, tight-bunned Yale student. To be part of the generation still lost, migrating from place to place without any fixed destination; to no longer have a mapped out plan, but merely exist from day to day, having no connections, no way to be traced, but to just be.

I was still living in the bookstore during the crazed celebrations of the final Harry Potter installment. In the midst of the long line of squealing customers eager to acquire their reserved copies, George yelled at me for not properly centering Shakespeare and Co.’s signature stamp on the title page, insisting that the customer deserved a refund for not receiving a properly-placed stamp. I laughed, and Sylvia smiled at me with sympathy. After the copies had been sold, George sat down in a corner chair to offer all the regulars his homemade butter rum from a glass bell jar. We all walked outside and dispersed across the worn benches lining the shop. I carefully rolled some tobacco; as I peered over the end of my first cigarette, I saw the eager eyes and smirking smile of a fellow writer as he lit the end. He seemed to take infinite pleasure in his minor involvement in my conversion into a free-spirit. I smiled and inhaled. I breathed in, opening my lungs and myself to a bohemian rhythm.

Jessica Svendsen is a junior in Morse College. 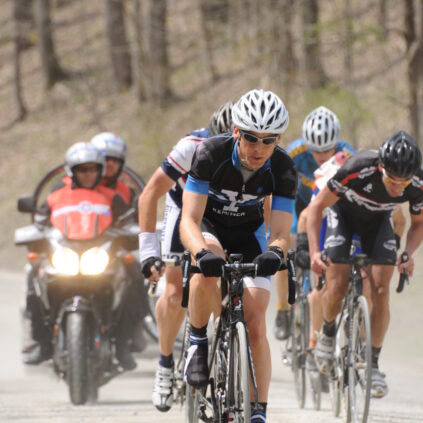