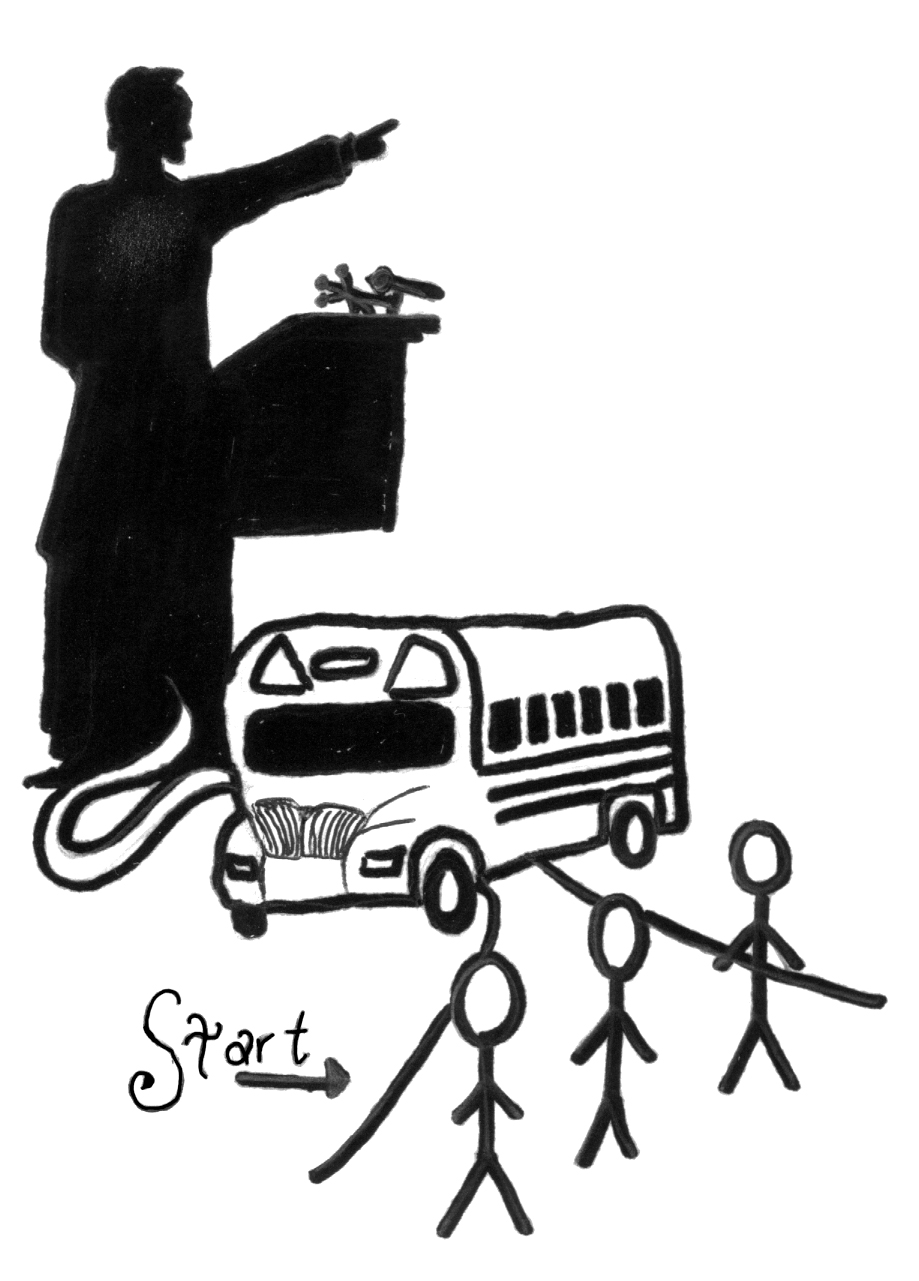 “All voting is a sort of gaming, like checkers or backgammon, with a slight moral tinge to it, a playing with right and wrong.”

Uncertainty and chance are beginning to feel familiar to many Americans. The experiences of the last our years have left their mark on the American psyche—and on this fall’s coming election.

This year, a New Haven resident created a board game that mimics life in these conditions. In “Generation,” a single roll of the dice can undo anyone’s hard-won success. Through a mixture of prudence, cooperation, and good luck, players chart the lives of their avatars, negotiating the advantages and disadvantages arbitrarily provided at birth. They have power over their fortunes only to the extent that they have the power to vote.

Over the last nine months, J.R. Logan, the director of new media at the United Way of Greater New Haven, has been developing a sophisticated, high-stakes version of the game of “Life.” The paper-and-die game of life, death, or poverty offers far more futures for its players than the bourgeois options and risks that its precursor permits.

Logan’s game grew out of a tradition of pedagogical board games at United Way, where staffers often use simple games to explain the workings of charitable fundraising to prospective donors. “I’ve always believed in the power of games to educate,” Logan said. For its part, “Generations” teaches players about the tension between present and future generations, and between self-interest and the good of society.

When I met him at his apartment, he showed me the game’s earliest renderings—a simple spreadsheet printout, full of handwritten annotations and rule changes. Even after designing a sturdier version through MakeHaven, New Haven’s collaborative workshop for tinkerers and inventors, Logan and his friends are still adding to the library of events that may befall characters in the board game. “You are hit by a bus,” reads one of the more tragic cards a player might draw. Players can also die by skydiving.

Players must choose among candidates with different rankings of priority on three major categories: education, health, and the economy. In an initial “primary round,” players with more money automatically have more political power. The top challenger gets to face the incumbent in a general election, and each player gets one vote.

As with real elections, the game’s elections present both short-term and long-term choices for players. For example, a candidate could reduce health care in the short run, while ensuring permanent wealth for players with incomes above a certain threshold. All candidates’ platforms make immediate changes to the society, but also change a separate, “baseline” measure of the three categories. The next round inherits the baseline resulting from the previous game, altering their starting conditions for the next round of votes.

In one particular instance, Logan recalls, players in one round kept electing leaders committed to improving education and health who were also negligent toward the economy. In the following rounds, players found they had fewer economic opportunities. They were annoyed by their new limitations, and didn’t understand why they should bear the price of an earlier generation’s mistakes. But that’s precisely the point: “Generations” works so that players are both chosen for, choosing for themselves, and choosing for others.

The biggest difference between “Generations” and a real election is the absence of the party system in the game. “The candidates presented in the game are randomly chosen, so there’s more variation,” Logan notes. “But the game reflects our actual political tradeoffs between short-term and long-term interests.” Logan perceives two broad groups of players: “mechanical” and “principled.” Mechanical players are determined to maximize their individual outcomes, while principled players advance a particular ideology even to their own detriment. This second group “becomes very emotionally attached to the outcome of the game,” while the first group seems to stay cooler and detached, Logan said. Politically opinionated or partisan players do not necessarily fall into the second group.

Logan is Canadian by birth and retains only a hint of an accent in the way he says “about.” His enthusiasm for his native country’s politics shows in the game, for example, in the cards that offer a player the chance to purchase plush health insurance. Logan freely admits the game reflects his political inclinations—if voters followed principle rather than self-interest, they’d come to support the social democratic policies that he favors and believes realize everyone’s long-term interests. The principled player will eventually make the best choice, which, for Logan, means a social democratic agenda.

For this fall’s Republican candidate Mitt Romney, the “best choice” has entirely different assumptions, but his campaign now seems to share Logan’s logic. He has specifically addressed the mechanical voter, asking individuals whether they were better off than they were four years ago. His campaign has hammered away at the public perception of the state of the economy in the hope of implicating President Barack Obama by association. This approach reflects a dominant view in social science that economic performance predicts the outcome of presidential elections. Forecasting models largely assume that the economic man, homo economicus, will be voting on November 6.

But in picking Rep. Paul Ryan as his running mate, however, Romney has shifted from his earlier reliance on pocketbook issues. His recent focus on welfare, entitlements, and deficits reflect the Romney campaign’s realignment with the principles of small-government conservatism. Traditionally, candidates pivot toward the center in the general election to appeal to the median voter. But now the Romney campaign wants to frame this election as a battle for the soul of the country, not just a referendum on four years of economic news, as noted in an August 28 article in the National Journal. Will this new, ideological rhetoric will appeal beyond his party’s own base?

It’s difficult to predict how appealing to voters’ ideologies will work out in the real elections, but the board game suggests Romney’s tactic may be a smart one. One of Logan’s most interesting observations suggests that even without parties, voters will still behave ideologically rather than self-interestedly. The question is, do this election’s undecided voters—the mystical six to eight percent according to Gallup’s daily tracking poll—vote like the non-partisan players of “Generations”? Are undecided voters simply principled non-partisans, or, are they lost souls, unsure what is mechanically best for them?

Polls consistently show that a large majority of Americans feel the country is on the “wrong track” and worry that their children’s generation will be worse off than they are. Uneasy feelings, of course, don’t coalesce into votes on their own. It takes a narrative to interpret and give coherence to voters’ confusion. In elections like the upcoming November’s, there is opportunity for that narrative to recreate itself every few months. In the elections of “Generations,” voters’ decisions are made only minutes apart.