From the NSA, With Love

You may not know me, but I know all about you. I’m a data collector for the National Security Administration. But don’t worry, I’m not here to defend our domestic surveillance program or deny its scope. I’ll be the first to admit that we have indeed been spying on you. You, personally. We have mined your phone records, your Google searches, and your direct messages on Twitter. We know your favorite YouTube videos, and we know which Buzzfeed articles you sent around the office with captions like “LOL SO TRUE.” We have neatly collated lists of your most-visited and your privately-viewed. We even recorded your Bing activity. Unethical? Probably, but I prefer to leave that question to the higher powers. What I’m here to do is save you from yourself.

I’ll start at the beginning. Getting the position was thrilling. I mean, data collector! I spent most of my time eating kettle corn while looking up old acquaintances from high school. Sheldon Jackson, for example, has gone from being the popular quarterback to a sad, sad man whose search history includes “regrow hair cheap” and “human hug feeling.” Rita Stinson, salutatorian, is now a clean-cut vice president at JPMorgan, but her SecondLife avatar has spiked purple hair and is a steampunk anarchist named “Spleen.” Jenny Grafton seems happily married, not that I care. Nine of my former classmates are divorced, three more are closeted, and nearly half of them have ordered self-help books from Amazon.

In addition to my private snooping, the job required me to trek through a never-ending wasteland of Facebook profiles. It seems to me like the sadder people are in their real lives, the more they pretend to be happy online. My old middle school math teacher, for example, is severely in debt—this I learned from her email correspondence with a loan shark named Stinky Pat—but her latest status reads, “just bought a BRAND-NEW bike (talk about a SPLURGE?!) and i couldn’t be happier!!!” Really, Ms. Stevenson? You have twice proposed marriage to Stinky Pat. Yesterday you spent six hours on Chatroulette, and for two of those hours you were the only user who wasn’t just a penis. Plus, that’s not even your bike in the picture! It’s your nephew’s. And Mr. Katchmore, shame on you for commenting, “can’t wait to see it when me + astrid are back from europe!” You wrote that from your kitchen in Hoboken, and Astrid is in a coma—or didn’t they teach you not to lie when you became a history teacher?

Celebrities, I learned, are especially prone to misrepresenting themselves over social media. Did you know that George Clooney has his hair professionally grayed? Or that Lady Gaga spends almost 90 percent of her time in sweatpants stained with the tears of oppressed sexual minorities? Justin Bieber is actually bald, and Nicki Minaj is a five-foot-three Jewish ex-con named Moe. All these people, the ones you spend so much time watching on television and following on Twitter, you probably wouldn’t recognize any of them in real life. Example: see that pig-tailed girl picking her nose over there? That’s Miley Cyrus.

I mentioned that we have neatly collated lists of everyone’s most-visited and privately-viewed web pages, and I wasn’t kidding: the lists are in three-inch blue binders, along with printouts of Google search histories and recent text exchanges. I read your sister’s file earlier today, and there’s some juicy stuff in there. (You should ask her: “Elā mīru telugu māṭlāḍaṭamu nērcukōlēdu?” That’s Telugu for, why did you learn to speak Telugu?) And currently sitting on my desk, this moment, as I’m writing this, right in front of me? Your binder—your personal NSA life-file. If I open it, I’ll learn all those small dark secret things you’ve tried to hide from everyone.

But why do you so desperately want to hide? When you’re hiding, you’re alone. Even when you’re in public, even when you’re singing “Superbass” to a sold-out arena—because Nicki might look great, but Moe is still there, plugging away under a pile of fake hair and makeup and clip-on nails, and nobody will talk to him about the aesthetic purity of Shabbat.

When you’re alone like that, you become lonely, and that’s when you order self-help books from Amazon and try to elope with Stinky Pat and lie about how your wife isn’t actually in a coma. You’ll say anything to hide your loneliness from others. Eventually, you’ll become hidden even from yourself, and not even the NSA will be able to find you. Which is saying something, because, as I mentioned earlier, we have a lot of data. 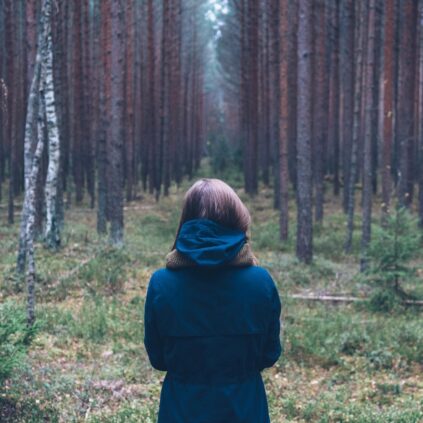