The walk to New Haven’s Evergreen Cemetery prepares you for where you’re going. Yale New Haven Hospital, a nursing facility, and the Jewish Home for the Aged line Davenport Avenue leading up to the wrought iron gates. “RIP” is written in Sharpie on metal lampposts surrounding the grounds. Once, I saw the leathery face of a butchered pig lying in the street.

But on a Sunday morning, as I passed through Evergreen’s brick entrance, the words “Hello and Welcome…” appeared on my phone over a picture of bright, blossoming trees and well-kept grass. Tombstones—some as small as shoeboxes, some towering and ornate—catch the sunlight at the bottom of the photo. The scene is the homepage for the Evergreen Cemetery app, released last year by webCemeteries.com. When it came out, Evergreen’s newsletter, The Bough, declared, “We are on the cutting edge of the Cemetery industry.” 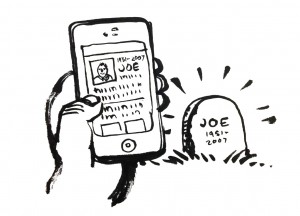 The app isn’t exactly Facebook for the dead, but it’s the closest thing. After opening the app, a user is offered three options: “Search,” “Nearby,” and “Tours,” all in modern, inviting sans serif. If you’re on Evergreen’s grounds, a tour places you on a satellite map of the cemetery as a pulsing grey dot. Blue markers appear on the screen around you, pointing out themed collections of graves. “The Ladies of Evergreen” tour highlights tombstones with female statues, many with faces turned down or covered by a stone hand. The “Governors and Lt. Governors Tour” is, expectedly, pretty straightforward.

Much of the tech experience is far removed from Evergreen’s gravel paths. Within days of a new burial, webCemeteries.com creates a profile of the deceased on the app and Evergreen website. Relatives can post photos, obituaries, life stories, and memories online. The most decorated profiles are those of historical figures, such as Edward Bouchet, Yale’s first black graduate, or William Chester Minor, who shot a man, entered an insane asylum, and wrote definitions for the Oxford English Dictionary (in that order). A few recent burials have contributions. One user, easily the most active, has uploaded eighty-six photos and more than forty memory posts on her husband’s page since his death in 2013.

Dale Fiore, who has been the general manager of Evergreen Cemetery since 1986, monitors the profiles and authored some of the tours. Fiore first encountered the idea for an app after seeing a webCemeteries.com demonstration at a trade show. Fiore is a loud speaker with a gravelly voice, gesturing with full arms and leaning his broad shoulders back in his chair. “We’re a very solid, progressive business,” he told me. He has been at the helm of the cemetery’s other modernization efforts, setting up a new office location and a mausoleum for cremated remains.

The app, his latest project, is part of his idea to build a “cemetery for the living.” After interrogating the company’s representative about the technology (“I really want to kick the tires and make sure things work before I invest in them,” he said), he brought the app to Evergreen, where all records now sync automatically with webCemeteries’ database.

I asked Fiore if having a posthumous online presence made it easier to think about dying. Could the “online cemetery” replace the real one? He seemed uncomfortable with metaphysical questions. “I never really gave it much thought,” he said. “I want to make sure that in my time here I do the right things for sustaining the cemetery’s future, forever and ever.” For now, that means keeping technology at an involved but careful distance. “You really can’t feel them,” he said of personal memories, “until you tangibly go and touch the stone or see your loved one’s grave.”

During a March snowstorm, about twenty women came to the cemetery on a field trip for their “Death and Dying” class at Albertus Magnus College. They gathered in the crematorium in rows of folding chairs, and Fiore stood at the front to discuss the process of cremation before giving a tour of the machine.

Evie Lindemann, the professor, was eager to talk about the app, an idea “fraught with difficulties and blessings,” she said. “The question I always ask myself is, what’s the nature of these connections that we’re establishing? I think there’s something about the human connection that we’re always all going to need.”

The class went outside to sketch tombstones (Lindemann has a degree in art therapy). Two of the students, Shironda and Tina, held umbrellas and wandered among graves on a hill near the crematorium. They took photos of the engraved names and snowy grounds on their phones, and I could hear their laughter as I approached.

“This death and dying class is not something I’m into,” Tina told me, shaking her head. She’s become increasingly uncomfortable over the course of the semester, she said. “I don’t think you’re ever prepared to die.” I told them about the app and opened the home page. They raised their eyebrows, but Tina seemed to get it. “Online has become the physical for a lot of people,” she said, shrugging her shoulders. “It’s like when you go into a wake and see pictures framed on a table.”

Shironda’s grandmother died three weeks before that day, and her family had just brought home the cremated remains. As we walked to her car, she talked about the process of accepting the loss. She would never use something like the Evergreen app, “but today answered a lot of questions,” she told me, getting into the driver’s seat. She headed back to school to finish class as the snow fell.

Driving down the Evergreen asphalt, Shironda reminded me of something important: she, along with Fiore, Lindemann, her classmates, and I, can leave the cemetery at any time. For the thousands lying still beneath the grass, though, the app might be the only to way to do that, to transcend a carved stone and fading memories. As family members create online resting places more personal than small plots of land, the “cemetery for the living” can extend beyond the fences of Evergreen. That’s good business for Fiore. But for someone like me, the user, meeting these people for the first time on the app, scrolling through profiles feels like peering into a private museum.

Can Yale Be a Sanctuary?