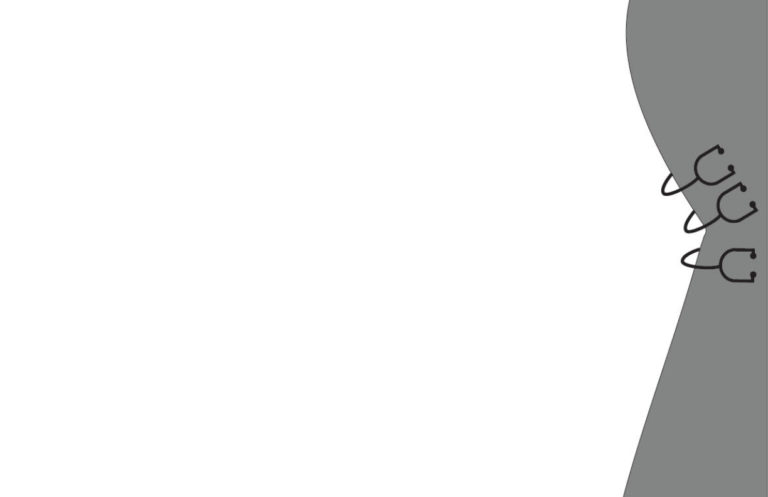 Aryan Patel, a 30-year-old therapist, sits before a fidgeting first-year medical student. Aryan needs medical attention: He has a fever, severe nasal congesion, and a sharp constant pain in his right cheek bone. He anxiously kneads his knee with his hand, unable to stop thinking about his blood tests: are his blood sugar levels too high?

The medical student clasps his hands together and nods nervously. “Oh, I see. Okay,” he says. He runs through the script in his mind: Elicit details of the patient’s symptoms. Ask about past medical care. What he forgets is: How is your family? How are you feeling?

Because he is not asked, Aryan does not reveal that he fears he’s inherited his father’s Type 2 Diabetes. He is constantly fatigued, and his tiredness has left him distant, distracted. As the interview limps to resolution, Aryan looks reserved, tense, and forlorn. Unspoken discomfort hangs in the air.

“Great, thank you, that’s great,” comes a voice from the corner of the room. With those words, the simulation ends. The room breathes a sigh of relief. The observing doctor chuckles, “You did a great job. Made me very nervous.” He then gives the medical student a chance to re-attempt parts of the conversation, to offer a warmer tone, to ask more personal questions, and to project more empathy. Once the student is through, ‘Aryan’ stands up, breaks into a brilliant smile, and ambles out of the room.

We are sitting in a small classroom in the Yale School of Medicine’s Hope Building, where four first-year medical students and an experienced physician are conducting a workshop on interviewing patients. ‘Aryan’ is one of many actors –– termed Standardized Patients, or SPs — paid to portray patients in medical simulations. SPs were first introduced in the United States in the nineteen-seventies, and have since become a routine part of every medical student’s training and assessment process. These patients are played by a motley crew of retirees, aspiring actors, and college students. The ailments they perform are largely mundane –– sinusitis, chest pain –– but their surface symptoms come with deep-seated anxieties and complex backstories.

For the medical student, the objective is to get the information they need while ensuring that the “patient” remains comfortable. But this is no simple task. SPs memorize character sketches with the patient’s background, medications, emotional contexts, and family history. To uncover all of this in a twenty-minute interview, students must be persistent and probing, but also inviting and kind. One script used in today’s workshop spells out what a patient coming in with heel pain should divulge, but only if pressed further:

If asked, the pain feels like a knife when you take a full step.

If asked, you like to wear boots or shoes with a medium-sized heel to look professional.

Finding the right question is key. If they ask a yes-or-no question, all they get is a yes or a no. If they ask open-ended questions, they are rewarded with more information. With patience and practice, students learn to gently unravel the personal contexts that underlie patients’ symptoms.

Through simulations with SPs, medical students cultivate the skills necessary for patient-centered healthcare, which situates symptoms in the context of the patient’s broader emotional well-being and lifestyle. Dr. Auguste Fortin, professor at the Yale School of Medicine, is internationally recognized for his educational work in improving clinicians’ communication skills and patient experience. “[It] is not just touchy-feely… to use patient-centered interviewing skills,” he said at a physician-patient communication conference held in 2011. He rattled off a litany of benefits: more accurate diagnoses, improved medication compliance, fewer tests and referrals, and faster symptom resolution. In short: better healthcare, with happier patients and doctors.

The American healthcare system is uniquely inefficient. A 2016 report by Gallup shows that Americans are dissatisfied with the services they receive, even while spending twice as much on healthcare compared to citizens of other developed nations. In important ways, this inefficiency is a product of a system that does not promote listening to its patients. As Dr. Fortin argues, “We interrupt our patients prematurely an average of twenty-one seconds into a visit. When we do that, we fail to address the patient’s concerns, and we fail to really understand the patient’s full agenda for why they are seeking healthcare.” When doctors do not convey empathy, patients feel alienated. Alienated patients don’t take their medication, adhere to advice, or follow up on referrals.

SPs form the flesh and blood of the shift towards patient-centered healthcare. At times, their work places extreme emotional demands on them. Jackie Sidle worked as a SP in and around New Haven for fourteen years before becoming Coordinator of the SP program at Danbury Hospital. In one of her most demanding roles, she played a woman with borderline personality disorder.

“That was very difficult because she was suicidal,” said Jackie, her tone darkening. “She had been sexually abused and raped when she was nine. She was a drug user. She was so sad. And she was mean, so that was hard.” Nursing students on their psych rotation often left in tears after their encounter.

“It’s real. It feels real,” Jackie said. “I mean, there’s medical equipment around you, there’s someone in a white coat and a stethoscope, and you’re sitting in a hospital gown. You’re innately very vulnerable.” SPs find different ways to navigate the reality of their characters’ lives.  Some bring pictures of their own kids. Jackie used an alias every time, a combination of her middle name and the street she lived on in Chicago. She never liked using her real name. “It just felt like bad karma,” she said, shaking her head.

Another difficult role: being the recipient of bad news. Jackie recalled workshops for “Disclosing the Unexpected Death of a Loved One”; in one case, the trainee had to tell a man that his 50-year-old wife, who came in for a checkup after feeling leg pain on a flight, had died while he went to run an errand. At times, the simulation was so harrowing that the medical students broke down into tears. But it was even more fatiguing for the person who has to pretend, again and again, to discover that their wife is dead. Jackie remembers one SP who volunteered to do the simulation three times in a row –– by the end, she said, “it looked like a truck hit him.” Now, as Coordinator, Jackie limits SPs to no more than two bad news simulations in a row.

For the most part, however, simulations do not deal with severe, life-changing diseases or devastating news. In the Yale School of Medicine, SPs flit in and out of rooms with ease, rattling off rehearsed answers to standard questions. Still, one cannot help but be struck by how earnestly students approach the patients before them, and the professionalism and skill with which the patients enact their roles. Outside the simulation, a slight shift in tone, or the minutiae of one’s facial expressions –– even a moment of eye-contact –– can forever alter a patient’s life. But in here, students can make mistakes. They can start over. Slowly but surely, even nervous, fidgeting students learn when to smile and ask the right questions; when to prod, and when to let go; when to talk, and when to simply listen.

— Rachel Koh is a sophomore in Silliman College. She is an associate editor of The New Journal.