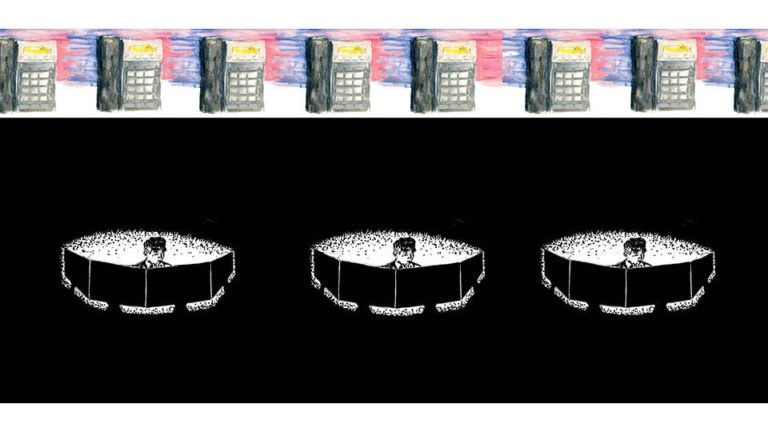 The People Who Pick Up

It’s noon at the call center at the New Haven Police Station. The operators, dispatchers, and supervisors are visible less by the ceiling lights, yellow and dim, than by the white glare that monitors cast upon their faces. These screens are everywhere: three or four per person, each with a different spreadsheet or alarm system, while another larger screen dominates the wall, displaying the names of officers on duty. A TV tuned to the news plays silently overhead; no one is watching it. A supervisor holds two phones, one for each ear, and simultaneously yells information to a dispatcher across the room. By the wall, an operator stops mid-sentence to answer an incoming call, then another; traffic starts to pick up. An active shooter, a fire, a panicked mother to be talked through CPR. The rapid speech of a dozen-odd employees fills the shadowed room. From time to time a joke is thrown into the mix, and a short laugh sends a voice flying. But always within seconds, that professional tone—any call-taker’s best asset—returns to calm a desperate caller.

This is a standard day for the New Haven Public Safety Communications Department, which is responsible for managing the thousands of emergencies that flare up across the city daily. Although an employee’s duties can differ throughout the week, new hires generally begin as operators. Known more colloquially as call-takers, their job is to handle the initial calls, from the mundane to the dire, of those in distress. Senior operators may be assigned to the post of dispatcher, coordinating fire, police, or ambulance responses to the emergency situation. Overseeing all of this are the supervisors, typically long-time dispatchers, who watch the list of held calls to ensure there is no backlog. The entire effort is facilitated by the director of the department, George Peet, who has been here since 1997. Each morning these employees, many of whom have been here as long as Peet has, must wake up and steel themselves in whatever way possible for a fresh batch of crises.

In an office down the hall, the call center’s clamor is inaudible. Sunlight streams in from a wide window overlooking Route 34. The employees to whom I talk range from recent hires to old hands; all of them have no shortage of war stories. David Mancini, a jovial dispatcher with some top teeth missing, recounts a running gun battle that affected three neighborhoods and the highway. Debbie Thornton, the two-phoning supervisor, was the dispatcher for the 2002 drug operation in the Hill neighborhood during which Officer Robert Fumiatti was shot in the face. “He died three times on the way to the hospital,” she tells me. Fumiatti survived five more years before suffering a fatal heart attack, likely tied to that earlier injury. Another operator offers the story of a wife trying to save her overdosed husband. For Sheila Villegas, a call-taker of five years, the hardest calls are those in which children call for their parents or a child is in distress. “I have a ten-year-old at home, so those are always touchy,” Villegas said.

These cases, terrible as they sound, are the exception in that the operators eventually learned how they turned out. Much of the time, Peet says, the trauma of a call does not resolve itself. “Call takers talk to people in all types of emergencies, from childbirth to stabbings to shootings to houses on fire to people trapped to people having their own mental issues. We’ve talked people off of bridges—all these sorts of things. There’s no closure.”

Yet other factors compound the inherent stresses of the job. Work policies, for one, are seen by all involved as archaic and often draconic. Peet notes that employees sometimes get schedules with inconvenient days off, and that many policies are driven only by seniority. As a result, it can take years as a call-taker before the job starts to pay dividends. Benefits, too, are scant. Thornton, a twenty-three-year veteran of the call center, worked a second job at Home Depot until 2018 to support her two children as a single mom. In her opinion, daycare accommodations, or similar employee support, would have made a major difference.

Mancini, his chair propped up beside a desktop Bill Murray sticker, explains that many operators quit as a result of the high stakes nature of call-taking. “We work in a mistake-free environment. What you do—on the phone and the information that the call-taker takes, and how the dispatcher dispatches it, and how the supervisor’s listening to make sure everything goes smoothly—is the difference between life and death.”

He looks at me intently for a moment, then leans forward. “Regrets, bro. You don’t want those. That’s why whether you just got married or you just won powerball and you’re having the best day of your life, or she just broke up with you and she’s going out with your brother and everything else and life’s miserable—you got to deliver.” He gives me a rueful, gap-toothed grin.

Peet also sees a lack of public awareness about the difficulty of call-taking as another factor exacerbating employee turnover. “We kind of get left out of the picture an awful lot,” he says. I ask about the 911 SAVES Act, introduced last August in the U.S. House of Representatives, which would aim to bring more prestige and better pay to the profession by changing its classification from clerical work to protective services. When I mention the Act, Peet can’t help but beam. “That would be like ‘God hear my prayer’ being answered,” he says with a laugh. “Just the fact that [dispatchers] would be seriously considered as part of the public safety process. Like anything, people want someone to say ‘you do a good job.’ It takes a very humble person to do what they do and to not get the recognition for it.”

How do call-takers and dispatchers maintain their mental health day in and day out, faced as they are with the sometimes jarring sequence of calls from non-emergencies, such as noise complaints, to calls about fires, overdoses, murders, and the like? One answer may be institutional support. “The city and the department offer EAP, Employee Assistance Programs. We’re constantly watching people for signs of stress,” Peet maintains. When asked about NHPD Chief Otoniel Reyes’s suggestion of mandatory mental health check-ins for police officers, he says it’s a procedure his department would also be in favor of adopting.

Even so, many employees at the call center are skeptical of the current mental health infrastructure’s efficacy. “Most people are hesitant in utilizing EAP because there’s a stigma to it,” says Mancini, rubbing his chin.

Villegas is of a similar mind. “I think partly some of the employees don’t feel comfortable admitting they need some type of help for their stress levels. I think sometimes they may feel weak, or they don’t want others to know they’re suffering from some sort of PTSD or from certain calls.” Yet the system also needs work, not simply the mindset of call-takers. “I think that in our department, they just expect you to get over it, in a sense,” Villegas notes. “With all first responders, I don’t think they make mental health a first priority.”

Where institutional tools fall short, personal coping mechanisms pick up the slack. Each operator has their own tried and true way of destressing. For Mancini, this involves “cats, guns, motorcycles, martial arts” and his girlfriend, who is reportedly “lovely.” Thornton, who recently moved to a farm with geese and ducks not far from New Haven, relies on baking and smooth jazz for relaxation. Teri Nelson Durant, a veteran dispatcher who previously worked at a post office, has a ritual of praying every morning on the way to work. At home, she takes her mind off of work by spending time with her fifteen kids. “Grasping them outside of here is what helps keep sane,” she says. “It keeps me busy.”

As for Villegas? “Honestly, my therapy is my dog,” she says softly, with a tentative smile. “After a rough day at work I go home, and he’s there, and he’s just so happy to see me—just coming home to him and my son, just trying to forget about what I went through during that shift.” She looks at the wall behind me. “Unfortunately, after working here for so many years, you kind of get numb. Because it’s just one call after another call after another call.”

The call center is more full of banter than one might expect, usually through small jibes that sneak their way in during the slowest hours of the day. A frequent instigator is Mancini, who came in second at a recent amateur stand-up competition, and who explains somewhat redundantly, after a half hour of wisecracking, that he likes to tell jokes: “That’s my self defense.” The other operators interviewed largely share his thoughts, but it is Durant who most succinctly expresses the importance of a sense of humor. “Sometimes we have to laugh and joke,” she says with a throaty chuckle. A light rain licks the rooftops behind her, out the window. “Sometimes we find ourselves laughing a lot just to keep from crying.”

Peet suggests that the most heartening consolation may come from a sense of purpose. “I don’t want to say there’s more positive than negative, because the negative’s pretty heavy, but I believe that the positives that do occur are so rewarding that they help to wash some of the negative away,” he says. “We try as managers to instill in their minds that people usually are calling 911 at some of the most dire moments of their life, and you are the person that’s able to help them. So you can walk away knowing you did something good and valuable on that day.”

The other operators agree. After his first gig out of the military, a post at Town Fair Tire which he describes as “a great fucking job,” Mancini says his late mother called him up. “She’s like, ‘Why don’t you help people?’” He shakes his head. He took the job as a dispatcher, he says, to serve the community. “I was born here; I was educated here; now I have the privilege of working here. I have a vested interest in seeing New Haven do well.”

The signature detachment of operators’ voices tends to conceal how much the job matters to them. Peet, the director, recalls a particularly brutal 2013 blizzard, which dumped more than four feet of snow on the city. “Any time we sent an ambulance out, within moments they were stuck,” he says. He remembers having to tell his operators that they could not leave because the doors downstairs were blocked. It was impossible for emergency services to reach those in need. Employees took turns sleeping in the office while their colleagues, exhausted as well, told frantic callers that they could not help. Caught up in the memory, Peet is somber. “As a public servant dedicated to safety, to tell someone you’re on your own—that doesn’t fit within anything that you have within you, let alone training.”

Before I leave, I sit for a half hour or so with Thornton at her desk while she supervises. As she recounts the decades’ worth of calls she has fielded, it seems like a dam breaks inside of her. The words come out in streams. She tells me about cars flipping over, cops being shot, how she managed these horrors as a single mom trying to raise her kids alone. At last she arrives back at the death of Officer Fumiatti, for whom she felt responsible as his dispatcher, at which point we both realize her cheeks are wet. Out of her hundreds of thousands of dispatches, many heroic successes, this one remains with her. I ask Thornton how one deals with it all. “You don’t,” she says. She turns away; the phone is ringing.

— Jack Delaney is a first-year in Pierson College. 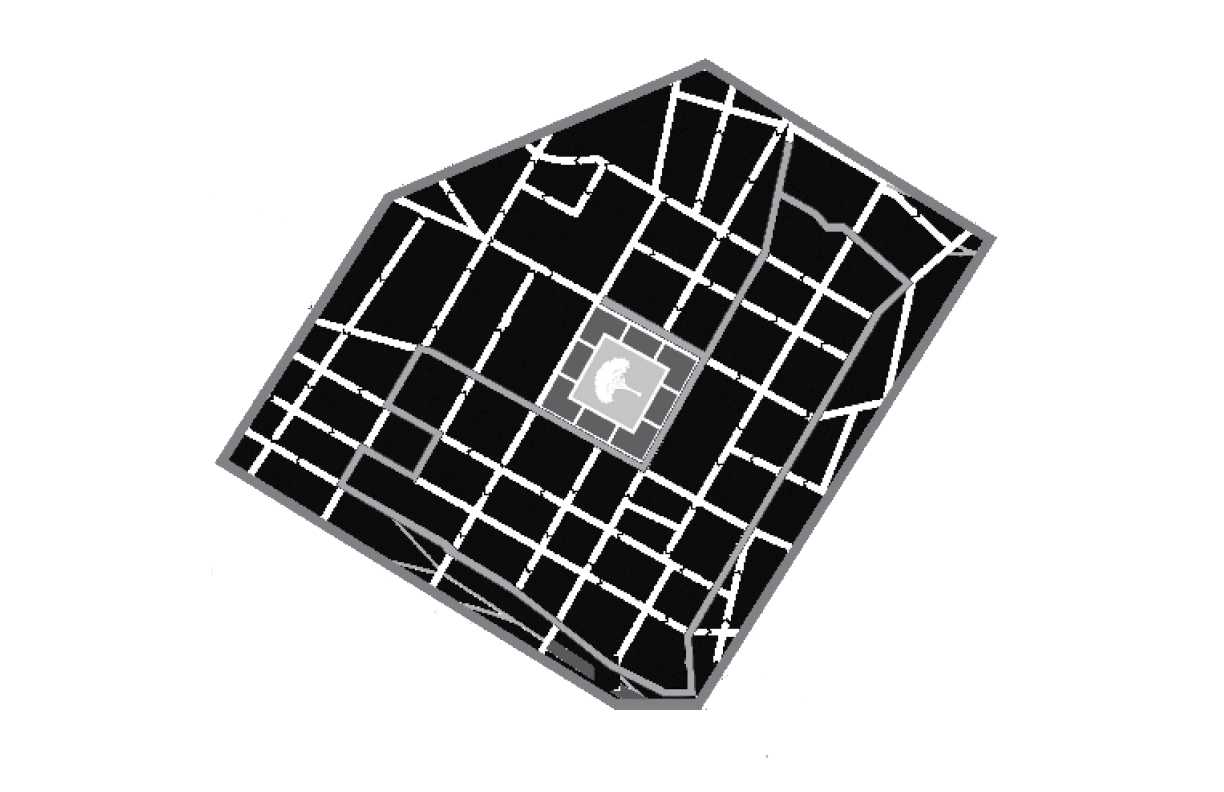