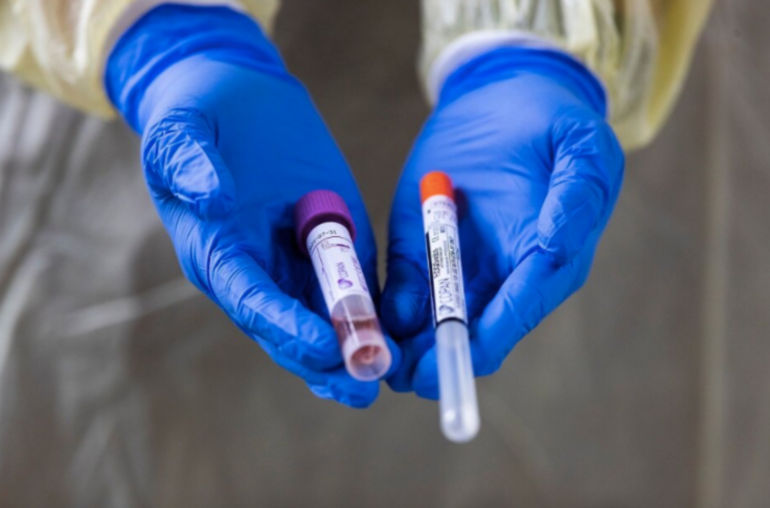 The Campaign to Convince

I’m immune. I don’t leave the apartment. You got sick last April. We don’t know how long it’ll last. I won’t take it. You have a civic responsibility. No, I don’t. If you don’t take it now, it’ll be months before you’ll have the chance again. I’ll live with it.

So it was settled. My grandfather, 89, news-savvy, sophisticated, sartorial, middle name Alfred, usually sweet, crippled by Covid, whose wife, my grandmother, died of it months before, refused the vaccine. There was no convincing him. The next day, my mother tried again.

In New Haven, in the next days and months, hundreds of volunteers––organizers, clergy, students, and doctors––will be trying to do en masse what my mother tried to do with my grandfather. They’re part of the city’s campaign to convince. Now that two vaccines are effective and available, what’s left is persuading enough people to take them for their efficacy to matter.

That campaign depends on two conditions. First, infrastructure: having the sites––converted Yale gyms, parking lots, churches––having the personnel, and having the shots. And second, unburdening healthcare workers––cutting transmission with masks and distance––so they can get out of permanent crisis mode, and onto prophylactics.

So far, the city’s opened five mass vaccination sites: at the City Health Department, the Fair Haven Community Health Clinic, and the Cornell Scott Community Health Center, and in huge hangers like the Lanman Center and the Floyd Little Field House. Each shows an extraordinary human effort and the problems inherent––that, as impressive these proofs of efficiency and scale are, they’re only a fraction of what’s needed.

As of this writing, New Haven has the capacity to vaccinate 1,100 people per week, according to Gage Frank, the city’s Director of Communications. And with that capacity, in the week of February 3rd, as tallied in the Connecticut Department of Health’s dataset, the city administered just over 900 first doses. Roughly 80 percent of nursing home residents, the first group eligible, have been vaccinated with at least one dose––past the threshold conferring “community immunity,” where the virus is buffeted from viable hosts by walls of inoculated ones. Close to 45 percent of city residents 75+ have received at least one dose (2,481), which ranks New Haven sixth among all Connecticut municipalities––still missing the state-wide mark, in that age group, of 53 percent. Achieving immunity in a city of 130,000 will require a pace of vaccination an order of magnitude faster than it’s currently moving.

But the pandemic is still raging in New Haven, and it isn’t immediately obvious how to meet even the first condition. Doctors and nurses are working 16-hour shifts. In-patient hospital services are at 95 percent capacity. Dr. Everett Lamm, a pediatrician at Fair Haven Community Health, told me that, even as the state’s positivity has plateaued at about 3.5, the rate in Fair Haven, a low-income neighborhood on the city’s East Side, has been static in the double-digits––12 percent or higher, on a given day.

Two initiatives have recently begun lobbying state and federal officials to involve medical and pharmacy students in the vaccination effort to relieve the strain on current staff. In mid-January, the National Student Response Network (NSRN), a coalition of medical, nursing, physician assistant, and pharmacy students, wrote to the COVID-19 Task Force and the Biden Transition Team with a direct appeal: “national involvement of health professions students is crucial toward addressing vaccination workforce shortages.” Those shortages run deep. For the average clinic, the CDC recommends having a 58-person team of medical screeners, vaccinators, clinical managers, EMTs, and others on site. On the scale required in a city of New Haven’s size, that would mean reallocating a massive amount of hospital staff––at the moment, something the system can’t spare.

Hirsh Shekhar, NSRN’s National Director and a first year at Yale’s School of Medicine, mentioned two precedents for student involvement in mass vaccination: Stanford’s Flu Crew, which has run seasonal campaigns since 2001, and the University of Cincinnati College of Medicine, which enlisted hundreds of its students as surge vaccinators during the 2009 H1N1 pandemic. “In any accredited pharmacy program, training to provide immunization is a standard part of the second-year curriculum,” he told me––the point being that nothing besides will and time is keeping the 600,000 students in all health professions from being certified to do the same, after the standard 20 hours of training. One of NSRN’s goals is to broaden the success of past campus-specific programs––to create a sort of medical student reserve corps, ensuring vaccination doesn’t stall for lack of hands.

The other component of NSRN’s work involves allaying fears and misconceptions around the vaccine (most often about side-effects, which show the immune system’s learning to fend off the virus; or the speed of the vaccines’ development, the upshot of $9 billion of federal funding, compared to the $500 million to $1 billion a typical vaccine receives for R&D). An interdisciplinary partnership of medical, law, and public health students at Yale started a hyper-local version of NSRN’s framework this February. Danielle Miyagishima, an MD-PhD candidate at the School of Medicine and the project lead, explained that its aims are threefold: “decreasing the workload for overburdened health staff;” easing the “accumulation of small inconveniences,” like lack of insurance, time, and internet, which might discourage someone from registering for the vaccine; and having conversations, door-to-door and on social media, to gain community trust. Like NSRN’s and Yale’s, any campaign against misinformation has to recognize its talent for metastasis. Doubts, like inconveniences, tend to accumulate, and making the case that they’re unwarranted is significantly harder than seeding them.

The seeders have had a century-long head start. “Anti-vaxxers today are recycling arguments that were made a century ago, because those arguments are coming from a similar set of mistakes in the way people think about data and look at data, and similar underlying fears,” Jonathan Berman, a professor of biology and physiology at the New York Institute of Technology, and the author of Anti-vaxxers: How to Challenge a Misinformed Movement (MIT Press, 2020), told me. Fair Haven’s Dr. Lamm had said something similar, that early on, many people had misinterpreted the mRNA method the new vaccines use. While mRNA trains cells to produce a harmless protein, triggering an immune response, many believed the vaccine actually rewrote DNA. Others fixated on the infinitesimally few bad reactions reported in the news. Another law of misinformation: data is often manipulated, but it doesn’t have to be in order to be misinterpreted.

This new generation of anti-vaxxers has the added advantage of leveraging internet echo-chambers and viral misinformation––the sort social media algorithms amplify, and the absence of regulation permits. “Now we have a huge increase in vaccine hesitancy and in people who are actively sharing anti-vaccine ideas,” Berman said. “Part of it is simply that we can communicate better now than we ever could.” I got a glimpse of the bottomlessness of the problem when I went looking for his book on Amazon. The “Products related to this item” box, at the bottom of the page, threw up a pamphlet on death-curing elixirs––what the Big Guys don’t want you to know.

“Part of it is also that a lot of the problems we have socially have never been fully solved,” he continued. “That makes an environment where people can be persuaded with lies and misinformation that are premised on their underlying social concerns.” Anti-vaccination is a perennial instinct in modern society with roots in every other fear––of change, authority, lies, unfreedom, illness, and death. It’s been made into a struggle for the self. For that reason, it won’t, at least wholly, lose to “facts and logic.” The solution’s as complicated as the problem is clear: “Until people deal with the trust issue, there’s not going to be much change,” said Bernard Macklin, the Flu Outreach Coordinator at the Community Alliance for Research and Engagement (CARE) in New Haven.

Plenty besides anti-vax militants and mystics don’t yet trust that the Pfizer and Moderna vaccines are safe. In the latest round of polling from the Associated Press and the NORC Center for Public Affairs Research, roughly a third of respondents said they were unlikely to (17 percent) or categorically wouldn’t (15 percent) accept a vaccine. Nearly half in that category will have to come around for widespread immunity to take hold––for the coronavirus to become just another endemic disease we inoculate against yearly.

In Connecticut, the U.S. Census Bureau’s most recent survey of vaccine hesitancy found that distrust of the vaccines and of government was most pronounced in the African American community. Thirty six percent of African American respondents expressed reluctance because of a lack of “trust in COVID-19 vaccines,” and close to 38 percent because of a lack of “trust in the government.” In comparison, less than 20 percent of Asian, Hispanic, and white respondents attributed their concerns to either rationale.

Like vaccine clinical trial data, those figures can be prolifically misinterpreted, and used to buttress dangerous conclusions. “We consistently end up with scenarios where instead of asking questions that cast aspersions on the healthcare system, we always ask questions that cast aspersions on African Americans and their behavior,” Harriet Washington, author of Medical Apartheid, a history of racism in medicine and winner of the 2007 National Book Critics Circle Award for Nonfiction, told me. “The question we should be asking is, what is it about our healthcare system that is not getting the vaccine to people in necessary numbers, and not getting the vaccine to every group when it should. Instead we’re asking, what is it about African Americans that would cause them to reject the vaccine.”

Any campaign to build trust in the vaccines will have to contend with a system that continues to entrench its opposite––the “reasons why,” as Washington put it, “African Americans might be barred from the vaccine and may not have access to it. We know a lot of them already: less likely to have a personal physician, more likely to live in an area where the safety net hospitals are closing, lack of transportation, lack of having jobs that allow you to take time off for things like doctor’s appointments and getting vaccines.” Access, like trust, Washington said, begins with understanding systems and individuals’ place in them, not with hypothesizing motives.

The state’s outreach campaign is expected to begin in earnest come the summer, ideally when most who want a vaccine have received at least a single dose. “We’re looking to June,” said Hamden State Representative Josh Elliott, who sits on the Governor’s Vaccine Advisory Board. “That’s closer to when we’ll need to actively reach people who are skeptical.” The process will require central coordination on a decentralized approach––with labor unions, shelters, pantries, pastors, and local doctors––with the goal of restoring “reasonably lost trust in government.”

The testimony of friends, family, and other trusted messengers will be instrumental to that effort, which is part of CARE New Haven’s, NSRN’s, and the Yale program’s plans. As more people take the vaccine, others in the community will likely be more inclined to––a general sense, borne out by the data. The Census report from January concluded that “worries about side effects” and “plans to wait and see whether the vaccine’s safe” were the two most common grounds for hesitancy. When we spoke, CARE’s Bernard Macklin mentioned that he had received his first shot just the other day, and felt good. “I’m still here,” he said, “And now, I’m a witness.”

Postscript: Persuasion prevailed. My grandfather received his first dose of the vaccine on February 25th.

—Zachary Groz is a sophomore in Jonathan Edwards College and Co-Editor-in-Chief.