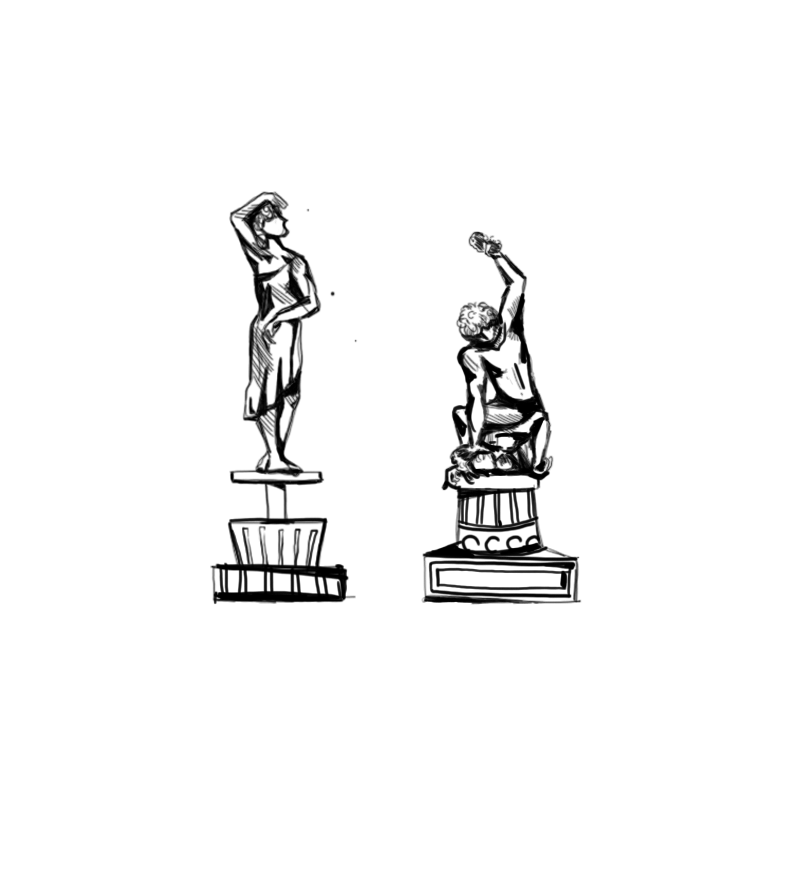 Classics in the Crosshairs

It’s rare to find something nowadays without any digital footprint, but the Yale Classics Anti-Racism Reading Group is about as close as it gets. A quick search for the group yielded three links: one to the Yale Classics Summer 2021 newsletter, and two to a departmental calendar listing the meeting I was about to attend. With this painfully limited knowledge under my belt, I walked into the room in Phelps Hall unsure of what I would find.

The handful of students in the room were just as shocked to see me as I was to see them. Nevertheless, after the initial surprise, I was greeted warmly by two of the group’s founders, Elizabeth Raab ’23 and Grace MacDonald ’23. I took a seat at the table in the center of the small room and watched as more people slowly trickled in.

“I was so surprised when you came,” MacDonald later admitted. “Classics sometimes can be so insulated.”

Despite its goal of inclusivity and anti-racism, the group is not immune to the isolation of the Classics department. Historically, that isolation has been strongly tied to the field’s conservatism, and often its racism. The discipline has relied on its rigidity, championing the same texts, philosophies, and scholars for centuries. The problem has carried over into the present day. As many in the group pointed out during their discussion, contemporary dialogue in the field still focuses conversation around “true Classicists”—who are overwhelmingly white and male—while looking down on other scholars like gender theorists. And outside of academic discourse, Classics has been embraced by some extremists and white supremacists as a kind of symbol for the West.

By the time everyone arrived, thirteen undergraduates, graduate students, and professors occupied the conference room, sitting in chairs against the wall, around the big oak table, or broadcasted on the Zoom call displayed on the TV. The group was small, but they filled the room and there were few open chairs left as the meeting began. Many of the older students sat against the wall by the door, while the discussion leader, two attending co-founders, and Professor Christina Kraus sat at the table. Though the group was racially diverse, the discussion leader and the club’s three founders were white. Was it possible for a group like this to succeed in its goal of countering racism in the field?

The group quickly came together in conversation, and I instantly felt out of my depth. There were no other observers, perhaps in part because all of the group’s advertising is through internal departmental email lists—whether it’s their undergraduate panlist or the departmental Pinax list—and it rarely sees any visitors outside of the Classics department. A typical meeting has anywhere from five to thirty people, all of whom are part of the department. Though MacDonald noted that they’d reached out to other department heads to scout interest in an interdisciplinary collaboration, she said they hadn’t received any responses.

The discussion, led by Grace Blaxill ‘23, focused on Simon Goldhill’s Review of Patrick J. Finglass’ Introduction to Sophocles, in which Goldhill critiques Finglass for perpetuating a conservative framing of the Classics that omits gender, politics, and cultural commentary. Much of the discussion focused on the idea that these academic introductions are not neutral; scholars push their own views of the texts by excluding certain parts of texts in their analyses or piecing together fragments to suggest a different key takeaway.

Late in the semester, by the time I visited them, the group had already exhausted the reading list of eight pieces selected by former Yale Professor Emily Greenwood, and the discussion I sat in on was not explicitly related to antiracism. These readings from earlier in the year included articles like “Lessons Learned: The Role of Classics in Black Colleges and Universities” and “Turning the Tables on Dominance and Diversity in Classics.” Greenwood, who was Yale Classics’ only Black professor, now teaches at Princeton, leaving the Yale Classics Department faculty of sixteen without any Black members.

The reading group seemed to be at a critical moment of negotiating their identity, poised to explore a more intersectional analysis of Classics within gendered, political, and broader cultural lenses. After exhausting the anti-racist reading list, it was now up to the group’s leaders to decide where to direct the discussions. Blaxill’s conversation delved into sexism and elitism in Classics, while the December meeting discussed ableism in Classics. The group is now broadening its scope from anti-racism to wider discussions of discrimination in the field.

Group members emphasized that though texts stay the same, field commentary should be dynamic. The push for more contemporary framing and analysis of texts reveals the battle to begin undoing the racist underpinnings of Classics, which traces back to the group’s inception in the spring of 2020. Jake Watson ’22 says the idea for the group came to him in his junior year, when he noticed that one of the required textbooks on The Odyssey for his and Raab’s class on Homer used the n-word without any scholarly justification. He explained that the carelessness of its use “really jarringly put it in our face how entwined Classics is with racist histories.”

After a conversation with his professor and a class discussion of racism in the field, Watson began working with the professor, Raab, and another interested classmate to try to get the publisher to remove the word from the book. Eventually, after lengthy negotiations, the publishing company promised to add a note in the front of the text warning readers of the slur. As Watson and Raab were negotiating with the publisher, a second impetus for the group emerged. George Floyd’s murder, and the national conversation on racism that followed, pushed the students to take further action. Raab, Watson, and MacDonald formed the anti-racist reading group aiming to educate themselves, to seek out challenging conversations, and eventually to take action. One of its main goals now is reassessing Yale’s Classics class structure and content. Specific demands, or action items beyond that, are still unclear.

Though group members said the Classics Department has been supportive of their mission since the club’s inception, Watson hinted at a slight tension between faculty and student priorities. He noted that when debating whether or not to keep The Odyssey commentary that used the n-word on the syllabus, some faculty argued it was the best book available due to a lower price and more comprehensive analysis than other textbooks.  Faculty wondered whether it would be more exclusive for students to have to buy “a really expensive textbook that is not as good for pedagogy and doesn’t cover as much of The Odyssey,” Watson said. “So I think there was some of that power dynamic there and generational difference. Inertia is a really strong force.”

Though the professor now teaching the Homer class has removed the textbook with the n-word from the syllabus, Watson notes that “that wasn’t really a departmental choice…. that was just what the instructor decided.” The lack of departmental accord over this change in curriculum reveals a deeper slowness to change in the field.

In the Phelps Hall meeting, Professor Kraus largely listened. She spoke a few times, framing her contributions with her extensive time in the field and speaking about the lack of proper credit given to female scholars. Group leaders said that more professors attended meetings during the pandemic, when they were not as busy, and now usually one or two come to each meeting.

Despite the sometimes slow pace of progress, group members I talked to were quick to emphasize that their goals aren’t in conflict with those of the department, and that they haven’t faced resistance beyond differences in priorities. In fact, the two groups often work together. The Classics’ Departmental Equity, Justice, and Inclusion Committee formed at about the same time as the reading group, and the two are becoming more interconnected. Both Raab and reading group co-leader Ziming Liu serve as members on the Committee, which has two faculty, graduate, and undergraduate appointments apiece.

This overlap is understandable considering the size of the department. Each year, faculty in the department outnumber the graduating seniors by a ratio of roughly two to one. Raab recalled attending a special graduation ceremony for Classics majors that featured seven seniors. That year was not an anomaly—the major’s average graduating senior class size is only nine students.

It may be no surprise, then, that the students starting the push for change look like those who have historically been in the department. The group leaders were not oblivious to the optics of their operation. Watson explained that the founders’ whiteness, lack of knowledge about anti-racism in the field, and the surrounding whiteness of the Yale Classics department made starting the group a delicate process. “We just try the best we can,” Watson said.

“Our goal is to put everyone on sort of an equal playing field—discussion—which often can be hard in an academic setting where there are professors, graduate students, there are all of these hierarchies,” Raab explained. “But in other ways it’s hard, right? Because we want to be as responsible as possible in including the voices that should be included, whether that be in our readings, our participants, the people who we invite in to lead discussions.”

Though leaders expressed their belief that those most interested in reforming Classics would be those in Classics themselves, they’re beginning to widen their lens. MacDonald and Raab explained, for example, that they’re working on a collaboration with the Yale Prison Education Initiative next semester in an attempt to counter the inaccessibility and elitist culture of Classics.

Despite being small, the group fights complete insulation. Members have participated in numerous multi-college events, including Eos Reads for Black Lives, a workshop where participants read a selection of texts from the African diaspora and considered their current implications. Raab and MacDonald also mentioned their “Accountability Groups,” in which professors and students from colleges nationwide meet and discuss anti-racist literature.

For now, the group is largely focused on curriculum-based work. Friday’s meeting ended with a list of action items about how to approach a flawed but helpful text like Finglass’s. Group members suggested adding an annotated bibliography that highlighted biases in the text, disclaiming sources, and disclosing texts as good for some things and not for others. One member referenced Professor Greenwood’s strategy of having students come to class with one thing they thought the text failed to accomplish or misstated.

“We want to talk a lot about how the classes in the department are structured,” MacDonald explained. “To discuss how syllabi are created, what the goals of syllabi should be, are faculty doing that, and how can we make that better? We’ve talked a lot about how we can make Classics more accessible.”

The group is already seeing movement on this front. Graduate student Christopher Londa designed his course “Identity, Power, and Practice in Classical Studies” with the help of a syllabus workshop by the reading group. According to its syllabus, the course aims to tackle the “systems of power and legacies of oppression” often brushed aside in the study of Classics.

After the meeting ended, I took the elevator down to leave Phelps Hall. It was only as I left that I noticed the bright blue posters hanging in the elevator and entryway, their bold white font advertising the group. I was tempted to grab one to bring with me, as a kind of memento, but I decided to leave it be. I had faith that this would not be the last time I saw the group’s name.

Abbey Kim is a first-year in Branford College.