It’s already past 10 a.m., but campus is silent on a Sunday morning. The overcast sky is the color of cream of wheat, and clouds linger placidly overhead. The cool November air feels too sleepy to stir, and there’s not a hint of a breeze. I’m anxious to get on the road to my aunt’s home in Simsbury, Connecticut and the Massachusetts border, but haste would upset the composure of the moment. Then again, I have a 112-mile day in front of me.

I’d been kicking around the idea for this ride since a confrontation with a cloyingly sweet cupcake a few weeks earlier, at a particularly bad time in my life. “There’s far too much frosting on this cupcake,” I can remember thinking. My parents and I had each been staring into space for the last ten minutes. My mother sat on my dorm-room mattress. My father had chosen the beanbag chair. I keep my equipment in my room, so we were crowded. One of my bicycles rested in a repair stand a few feet above the ground. The other machine lay against the wall. A set of carbon racing wheels filled the fireplace, and various solvents, lubricants, spare parts, and tools lined the mantle. I had bargained hard for the only single in Branford College with two walk-in closets to accommodate my jerseys, jackets, and socks, which all the same lay strewn on the floor.

I was munching on a giant, goopy Halloween cupcake, but the sweetness disgusted me. The toothpaste-green frosting didn’t help matters either. I pushed it away.

I was in a bad place that night. We had come upstairs when my voice began to tighten in the dining hall. It had been a semester so far of tearful phone calls, late-night flashes of panic, and trips to Health Services. Somehow, I was mis-shifting. A lingering, lurking anxiety—about my future, about my inadequacies, real or imagined—had dropped the chain, and my pedals were spinning. The thought of the time, expense, and care my parents had so generously given me only deepened the shame of the moment. I needed a day to be more than a harried, sleepless college student. I needed to do something to remind myself why I’d come here for school.

A long time ago, I caught the “New England bug”— chiefly a dream about family roots, the Ivy League, and Robert Frost poems. My father’s family is from Glastonbury, not far east of his sister’s home in Simsbury, where we had visited her many years ago. After that trip, I liked to imagine myself as a young California whippersnapper returning to his Connecticut roots for a proper university education. While I had made it to New Haven, I hadn’t gotten around to visiting my aunt and uncle, and I hadn’t seen them in nearly seven years. Reconnecting with them after a ride through the Connecticut countryside seemed like a healthy, sane thing to do. If I was going as far as Simsbury, I might even ride to the end of the Farmington Canal Trail at the Massachusetts border, fifteen miles farther north.

Bicycles don’t have faces, but every night the one on my stand stared me right in the kisser. There it was, repaired, poised, expectant, reproachful. The thick welds and wide tubes towered above my room, waiting only for a willing companion. I needed a day to myself, and that meant a day on my bike.

I’ve forgotten my sunglasses. Despite my three spare tubes, a hand pump, a mini-tool, pockets bulging with energy gels, arm warmers, leg warmers, a rear light, and about every other bike-related knickknack imaginable, I always forget something important when I’m going out on a ride. On the other hand, at least people will be able to look me in the eye. Maybe they’ll see a person and not a spectacled, spandex-encased alien.

Never in two years of riding around southern Connecticut have I really biked the Farmington Canal Trail, built over what was once an actual canal. Enterprising merchants completed the Farmington Canal running north from New Haven Harbor to the state border in 1835 in the early, heady days of American industrialization. The canal ran fifty-eight miles and featured an elaborate system of culverts and channels to supply its water from nearby streams. Numerous side channels and holding basins to accommodate two-way traffic adorned the canal route. The canal itself, however, was little more than a glorified ditch—unlined, with a bare earthen bottom.

Just over a decade later, the canal was filled and covered with railroad when shipping by train became more affordable. Today, colorful burnt-orange signs warn cyclists and runners of buried fiber optic cables shooting binary signals down the trail at the speed of light. Pedaling along the Canal Trail today, you retrace a history of relentless progress, of enterprising, single-minded, perpetually modernizing Americans—the same “practical men” Ralph Waldo Emerson critiqued witheringly in his essay “The American Scholar.” They may not have been great literary or intellectual minds, but they reached into the future with undeniable skill and drew it toward them with panache. Tracing tracks laid by calloused hands and trenches dug on cold November days, I feel closer to these men.

Along the trail north of Hamden, the colonnades of trees have shed the last of their autumn leaves. I’m making worse time than I would like—debris from a recent storm litters the trail. The trees stand barren and naked, waiting patiently for winter coats of powdery snow. A few hold out, but their rusty, dark foliage droops from their branches. A “No Skinny Dipping!” sign that’s outlived its seasonal relevance marks a pond on the right. Runners, somber elderly couples, and strollers punctuate the path. Proper cycling etiquette requires a clear “On your left!” when passing others, but it seems mostly to startle. I go slowly past a gaggle of toddlers on the grassy shoulder, but despite my passing distance Mom is frightened.

The Rails-to-Trails project that began converting the abandoned rail line to a multi-use path two decades ago has made slow progress, meaning the trail abruptly ends in places. Of course, Google Maps hasn’t gotten the memo. At one point in Cheshire the asphalt dissolves, and following my GPS, I take a dirt-access road that leads me across a nursery stock farm and through a cluster of greenhouses to the old rail line. The spikes have rusted through and the track is wildly overgrown in both directions. I stop to find my bearings. A pickup honks behind me. The driver is the one working on a Sunday, and I’m in the way.

Past Cheshire, the trail joins State Road 10. Time to open things up. There’s a slight tailwind, promising speed, and the bike settles into its rhythm. Not to disparage BMX or the mountain bikers of the world, but, in my opinion, the bicycle’s true home lies on the asphalt. Most simply, a bicycle is a tool for efficiently converting effort into motion. It converts work into velocity through a scheme of silently spinning gears, methodically turning pedals, and the gyroscopic equilibrium of the wheels. We move about the ground but above it.

The experience demands power and control, mediated by clip-in pedals that make the machine an extension of the body. A bicycle beckons us toward the ideal of souplesse, or “smoothness,” a quality of ease and calmness in every action: whether holding a line shoulder-to-shoulder in a tight pack, tracing the quickest arc through a corner, or launching the decisive attack when the road points skyward. Time on a bicycle, moreover, is a profoundly solitary experience. While we ride together and frequently cheat the wind with one another, each ride creates an irreducibly personal event. Each rider and bicycle form a whole, and a ride’s private sounds—the crisp whistle of the wind, the soft thrum of the tires—are engrossing against the silence of a well-oiled chain.

Three hours after I hit the trail, Simsbury’s main drag gradually emerges from the strip malls, fast food joints, and auto-repair shops along the highway. I’m almost there, and I’m struggling to think of conversation topics. My call the day before had been strained. While we had previously corresponded by e-mail about my “road trip,” I had put them on notice at the absolute last moment. “Hi, Aunt Amy? It’s Nick. Geiser, your nephew. Listen, I’m going to be riding the Canal trail tomorrow and I, uh, wondered if I could stop by? To see you and Mark?…” She drove to the point far more quickly: stop by any time, we’ll be out in the yard.

Lily, their golden retriever, charges out of the garage to greet me. My San Francisco home was too small for a dog and a bite from an aggressive poodle colored my childhood opinion of them, but Lily was the one wonderful exception. I find my uncle Mark dispatching a fallen tree with a chainsaw on the edge of the property. His weathered, creased face greets me with a bemused “Howdy, Lance!” I manage a sheepish grin. I follow him back to the house, stepping gingerly to avoid muddying my Yale Cycling shoe covers. Amy relaxes in the living room watching the University of Connecticut women’s basketball team dispatch a far lesser squad. I try for the usual conversational topics about work and school, but find myself talking instead about the Canal trail, weather, and whether I can make it to the Massachusetts border before nightfall.

The visit drags on for an hour. My cleats noisily clomp about the house, and Lily is climbing all over me, mixing her muddy paw prints with the blue paw print pattern on my Yale kit. It’s time for me to go.

After some hurried goodbyes, I’m back on the bike. It’s twilight already. There’s no way I’ll make it to the border before dark. The chill has set in and wind’s in my face now, pushing my pace down considerably. I’d overestimated the amount of time it would take me to get this far. If I want to make it back to school at a reasonable hour, I had better turn around now.

On the journey back, I pedal through towns’ empty Sunday evening roads, with only the dull glow of neon signs and the occasional passing car to break the monotony of the trail. The visit with my relatives could have gone better, I could have made it farther north in a milder season, but I’m not too disappointed. The ribbon of asphalt before me dissolves into the darkness ahead. My wheels thrum. On the bicycle, things are in-between. Where I’ve come from, where I’m headed at that moment are irrelevant—I’m moving. 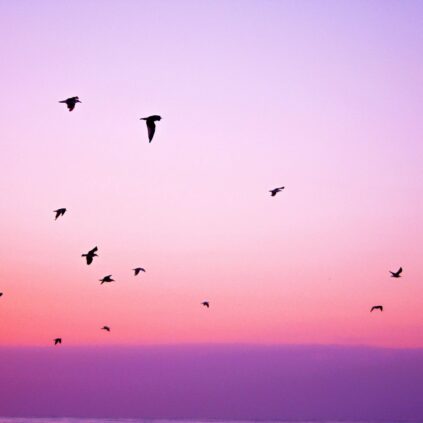 BEAUTY AND THE ‘KEETS