Secrets Are No Fun

Payne Whitney Gymnasium, 9:05 PM. The volleyball game is over, and I stand with a fellow adventurer in ten stories of bright emptiness. Every footfall echoes. We’re alone, free to explore and investigate Yale’s athletic cathedral. The United States Squash Hall of Fame features a wall-to-wall trophy case with aspirations grander then its five lonely trophies. The crew tank looks like an ominous blend of slave galley and medieval dungeon. It takes only a little imagination to picture floggings on the tile floor. The open volleyball locker room teems with sweatbands, shampoo bottles, and CDs of inspirational music. But—alas!—no secrets. This will not do. Our mission is clear.

I arrived in New Haven for my freshman year with a vague ambition to “keep busy,” until the Freshman Activities Bazaar knocked the wind from my sails. I wasn’t musical, or athletic, and my wishy-washy interest in social justice couldn’t match the ardent passion of my peers. Four hundred undergraduate groups fought for access to my time, body, soul, inbox—but I didn’t feel qualified for anything. I spent nights walking alone in my new city, aimless and nervous, clutching my wrinkled campus map, trying and failing to work up the nerve to knock on a fraternity’s door.

My brilliant college career was off to a slow start when I discovered a group of fellow wanderers with an eye for the mysterious: the Yale Society for the Exploration of Campus Secrets. Their first email contained only a link to their Web site. The page read, in full: yes or no?

My mind swam with visions: pressing secret panels and winning admittance to crypts, tunnels, and towers in the company of future C.I.A. operatives. Before long, a flyer appeared in my entryway: “YSECS Interest Meeting. Silliman Gate, Wall Street. 11:23 p.m. do not be late.” The university’s secrets would soon be mine.

Or so I thought. In their trials by exploration, freshman YSECS rushees learn an important lesson. Yale is gigantic—impossible to fully explore—and most of it is not very interesting. Secret rooms turn out to be electrical closets; secret tunnels, just regular tunnels except with graffiti. Beware the occasional group of stoners who will lure you onto their “secret” ledge to debate the architectural genius of James Gamble Rogers. Their promises are false.

All the same, I couldn’t stop myself from seeing mysteries in Payne Whitney that night. Why did male athletes of old wear shorts that went only halfway to their knees? Why doesn’t Yale dispose of its long-retired tackling dummies and rusting World War Two-era weight stations? Why did the school build a cathedral just to stick a gym inside?

The greatest enigma of all was a sign in the crew tank that read last year was last year—this year is this year. I thought of my high school cross-country battle cry: to run faster, you must run faster! I wondered whether the secret to sporting success lay in selecting the proper tautology. Surely, the Society for the Exploration of Campus Secrets would have an answer. For their sake, my companions and I trekked up five floors, and were ready to trek five more…

…but then we heard adult voices and decided to get the hell out of there. We flew down four flights of stairs in a matter of seconds—tiptoed around the ground floor—tried locked exits on every side—realized that getting arrested wouldn’t be the best way to end our first month of college—and finally found the door through which we’d entered and bolted into the fresh air, hearts racing. Forget Geronimo’s tomb. For a night, I’d tasted danger! Yale opened like a flower before my eyes. Soon, I’d be an elder of the Society for the Exploration of Campus Secrets, cloaked in black, flirting with freshmen at illicit candlelit parties—

Until they refused to admit me. Or my co-explorer. Somewhere on campus, three lucky freshmen—the successful initiates—must have spent a Thursday crashing every secret society meeting or broken into Harkness Tower with duct tape and a butter knife. No more exploring for me—no more nights prowling the campus with pretty girls. Yale’s thrills had lost their charm. But last semester, as they say, was last semester. Come January, I think I’ll start crashing frat parties. 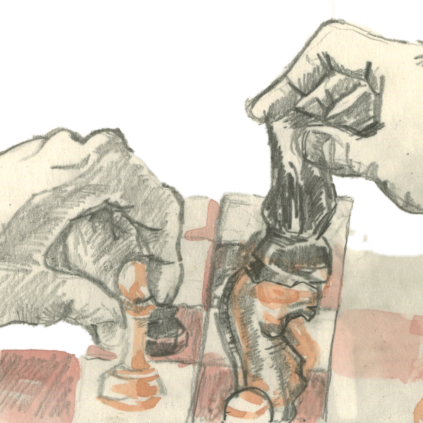