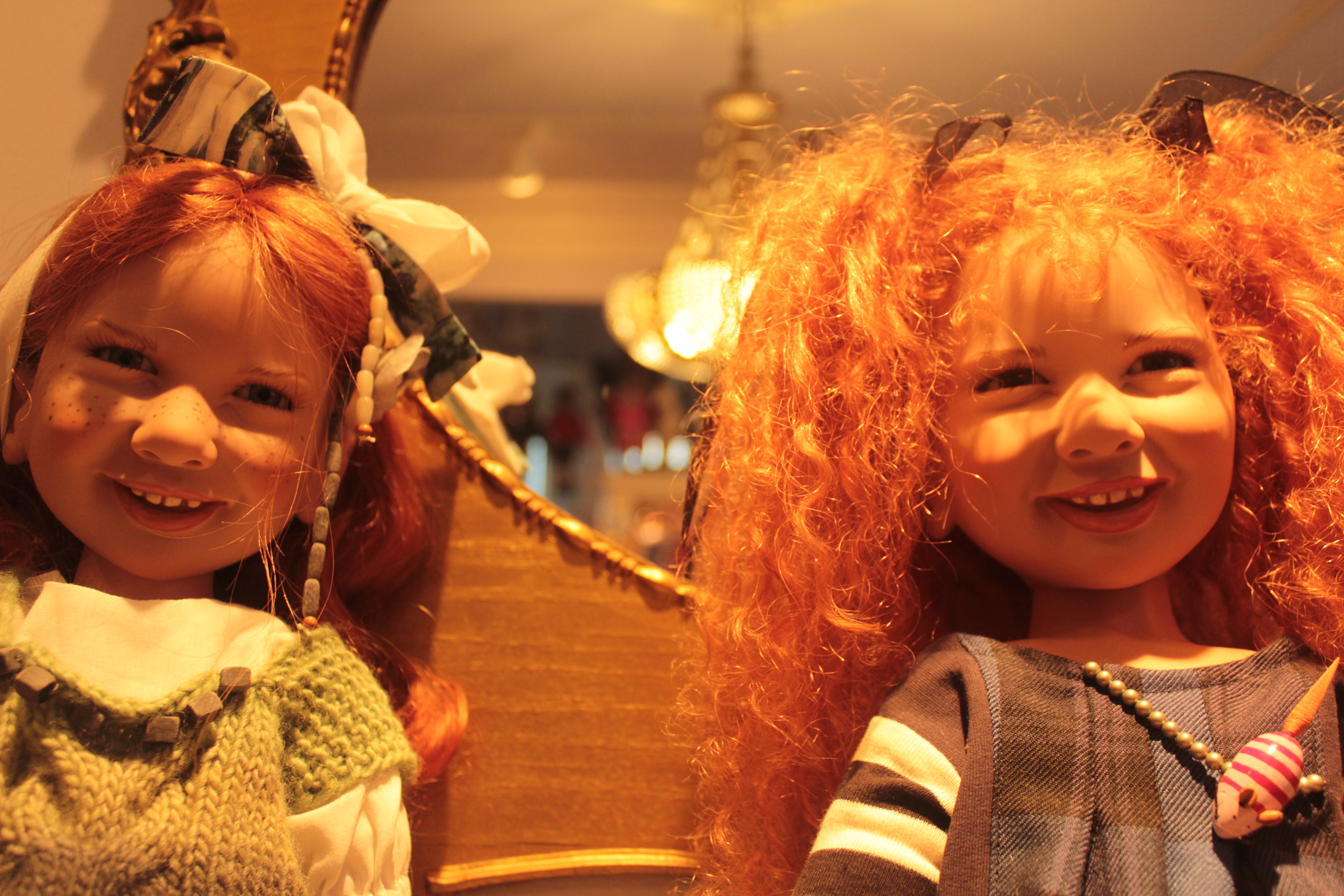 When you walk into Calling All Dolls, a doll shop and repair facility in Cobalt, Connecticut, the atmosphere feels tense. It’s as if you suddenly interrupted a group conversation and everyone looked in a different direction, trying to ignore the intrusion. Dolls with moony eyes and plastic hair, porcelain dolls with tattered Victorian dresses, designer dolls with photo-realistic eyes sit across from each other, stuffed in a room and suspended in a disrupted moment. They don’t frighten the shop’s owner, Renee Silvester. She put them that way. She fixes them when they’re broken. She has been doing this for a long time.

Things last longer than people do; that’s the great romance of collecting. But the popularity of kitsch objects is much shorter than a human lifespan. And so the collector’s nostalgia is split between the longing for a time no one remembers and the wistful memory of one’s own life years ago—in a different world, full of different things. Silvester knows both impulses well, as the owner of a doll collection spanning the nineteenth century to the present day. But at heart, she is a child of the 1950s. This was the greatest era of American dolls, she says, when toy companies started using plastic instead of a wood-pulp material called composition. Suddenly, dolls were cheaper to manufacture and more durable, ushering in a new age of brand-name vinyl companions—Patti PlayPal, Toni, Boopsie, Lolly, Judy Splinters; the list goes on. (Barbie, who debuted in 1959, technically belongs to this era as well. This is irrelevant to Silvester. “Barbie doesn’t do it for me. I want a big doll,” she told me. “You can buy Barbie for five dollars in a drugstore. That’s not a doll in my mind.”)

Silvester has a deep and engrossing appreciation for her dolls as artifacts—both of their historical era and her own life. She seems to define her childhood in terms of dolls. Growing up in a lower-middle-class Italian family in Cromwell, Connecticut, “you’d get one doll a year, at Christmas, maybe one on your birthday.” Silvester’s older sister Maria (who owns a doll shop in Florida) sewed her doll clothes from fabric scraps. Silvester is proud and a little defensive of her upbringing. “I’m obsessed with high-quality doll clothes, I think, because we had to make all of our own when we were little girls,” she told me. But the skills came in handy—the wardrobe she sewed herself in high school won her “Best Dressed” in the yearbook’s senior superlatives.

Silvester wanted to open a doll hospital since she first successfully reunited a doll’s leg with its body as a teenager. But her financial savvy trumped her childhood fantasies, so, newly married at 22, she worked administrative jobs at people hospitals and orthopedic practices. Travelling often for business, she started scouring antique shops for anything old and sentimental—mirrors, dolls, clothes. She even has a collection of fifties-era alligator purses, all made from real alligator skin, and topped off with a taxidermied baby alligator. All thirty-five of them filled the lobby of the orthopedic practice where she worked, until an anti-leather activist picketed for their removal.

Throughout the early seventies, Silvester and her husband flipped houses. They took out loans to acquire “handyman specials”—multi-family homes that needed major repairs—and renovated them on nights and weekends. They rented them out and Silvester managed the tenants, all the while working full time and raising two daughters and a son. It’s not clear how she managed such a huge workload. She has roundabout way of talking. Often she ends up at the logical opposite of where she started, despite finishing with a tone of finality. “Don’t forget—there’s no fun in my life. But that’s where I think I’m a little different. The fun stuff has always been work. What’s fun for you, going out partying on a Friday night? Well for me, when I was younger, I used to go out dancing at clubs. Ah, I was a maniac dancer. On tables, and that sort of thing.”

Regardless of how she did the work, it paid off. In 1981 Silvester and her husband could finally afford the Captain Ralph Smith House, a 1780s-era building not far from Cobalt. “That was the Dream House,” Silvester recalls. Her plans changed four years later, when her husband died in a motorcycle accident. She moved out of the Dream House, but she came into a bit of inheritance money and was finally able to collect dolls seriously. She treats this tragedy-fortune complex matter-of-factly. “I just kept doing things without him. Never stopped.”

I first visited Calling All Dolls because its name sounded like an escort service. I was travelling with two male friends at the time, and we noticed a sign on the store’s front lawn that said “Meet Grace, Doll of the Year!” None of us had ever been inside a doll shop or an escort service, and we were eager to meet this mysterious “Doll of the Year.” We shuffled through deep snow to make it to the front door, where a small, hand-crank bell was situated at just the right height for a little girl. I bent down and rang it. A short woman in a grandmotherly fleece answered. Her big eyes scanned us over and steadied—it was Silvester. “Welcome,” she said. “You’re the first customers I’ve had all day.” She motioned us in and shook our hands. “And you’re in a little harem!”

Once inside, we were in the company of a thousand un-blinking eyes. I quickly realized what surrounded us—American Girl dolls, their vacant faces all the same. Children are her main customer base, Silvester explained, and they don’t like vintage dolls. But Silvester knows what they do like. Standing in the room felt like being inside of a birthday cake. The smooth pink plaster had white crown moldings, the little chandelier cast the space in a honey glow, and American Girls sat on every wall, table, shelf, and crevice in sight. The Doll of the Year was one of them—her name was Grace, and her signature trait was “Francophile”. Around her, there dolls on a table poised for a sleepover. An ice skater doll in a victory pose. A group of cool doll friends having a camping trip by the window. And, confusingly, a doll on the counter with a waxen head and a legless torso, straw bleeding from the stumps.

Suddenly, a man with a hamster in each hand emerged from a door behind the cash register. Silvester introduced him as Jeff, her buddy that helps with repairs on weekends. “This is Peanut, and this is Princess,” he told me, as one of the vicious rodents wriggled out of his grip and clawed at his arm. “They’re usually asleep. You can hold them. Peanut’s a biter.”

“They used to be my grandchildren’s,” Silvester explained. “But they got bored of them, so they live here now.”

“Yes, I do,” she said. “I have a space in the back. It’s also my repair room. And, of course, at night I pull out a sleeping bag and sleep with the dolls.” We made eye contact. She held it.

She paused for a second, with a wide, tepid smile. Then replied, “I’m kidding.”

I returned to Silvester’s store a few months later, this time with a female friend who, Silvester noted, highly resembled a collection of red-haired artisan dolls in the store. Eager to talk, Silvester took us on a tour. In a side room, dolls clustered in little displays, organized by time period and country—a group of rosy-cheeked German dolls from the early nineteen-hundreds in the corner; crazed, yarn-haired nineteen-sixties-era cloth dolls on the shelf; a subdued brunette in a blue dress, sitting alone. American doll companies really started in the twenties, Silvester told me. The brunette was one of the only American antique dolls made in the early twentieth century, manufactured by a New Jersey company that operated from 1918 to 1921.

Nearby, dozens of shoddily painted Native American figurines populated a glass case. “Skookums!” said Silvester. “This company paid housewives to assemble the dolls from a kit. Now, none of them look the same—look, some are carrying little babies! Ah.” She clicked her tongue and tossed her head back, like a southern belle swooning at a pleasant thought. “They’re my little Navajos.” They were all smiling and painted in with permanent side-eye, looking politely uncomfortable. Silvester said the right-side glance is a sign of good luck.

Next, Silvester took us to the infirmary in the back room. When she’s not selling American Girls to little children, she’s repairing their parents’ childhood companions, or their ancestors’ stately heirloom dolls. She runs this part of the business in the middle of her kitchen, working from three shelves of convalescent doll beds whose occupants have all sorts of gruesome injuries. A forties-era baby doll with a smashed-in face lay beside twin boudoir dolls from the twenties, naked with no eyes. Underneath them, a teddy bear hemorrhaged stuffing. “I spend all my time in the doll hospital,” Silvester said. “I never cook. Women spend too much time in the kitchen, that’s what I think.” Customers aren’t generally allowed in the hospital. “When little girls see a broken doll, they scream!” she explained. “If they see an old doll, they say, ‘ewwww.’”

The doll market is peculiar nowadays. American Girls, with their look-like-me appeal and their strange, blank uniformity, by far outsell any other eighteen-inch doll on the market for children. Meanwhile, a whole community of doll artists use glass eyes, human hair, and extremely lifelike molds, creating limited-release dolls for adult collectors.

Silvester’s favorite dolls come from one of these collections. They’re new, from 2005, designed by the German doll artist Annette Himstedt. Himstedt spent a year travelling the world and capturing the likenesses of the little girls she saw in eerily realistic vinyl. Silvester has ten of them and knows all of their names. “This one is Natiti, my little Aborigine,” she said, stroking her hair. “And Tawni, she’s another Navajo. She’s my favorite.” Tawni’s eyes were deep-set and fuzzy with lashes around the edges, so attentively detailed they were almost cartoonish. “Those are human prosthetic eyes,” Silvester said, then insisted, “They’re real eyes.” She walked away from the doll and a little ironically, a little wistfully, smiled. “I paid one thousand a piece for them. Ah, I sometimes kiss them, I love them so much.”

Tawni and her friends stand stepwise on the stairwell, which is the first display customers see when they walk in. About eight people come into Calling All Dolls every day. The rest of the time Silvester is alone in the store, or her home, which doesn’t start or end anywhere distinct. She works constantly. She says she’s finally living her dream. Still, wandering around Calling All Dolls, it feels less like the realization of a long-held vision than a life’s retrospective, Silvester’s personal memory palace of dreams and experiences. The orthopedic practices turned a doll hospital, the antique Dream House an overflowing doll shop, the childhood memories resurrected in the staring, ageless company of the rooms—I wonder how much Silvester works, and how much she just reflects.

Perhaps the reflection was always the point for Silvester. For someone who surrounds herself with little-girl-likenesses, she isn’t bursting with affection for the real ones.

“The kids now, they don’t just want dolls. They want the Kindles, the iPods, and all the technology,” she says. But she relishes the experience her shop gives young visitors. “When little girls walk in here, they must think it’s a palace. And that’s my reward—they’re going to remember that the rest of their lives.” Given Silvester’s keen sense of objects and memory, she’s probably right. Even if some of those enchanted little girls will remember accidentally wandering into Silvester’s kitchen, and running out screaming, “Ah! What did she do to that doll’s eyes!”