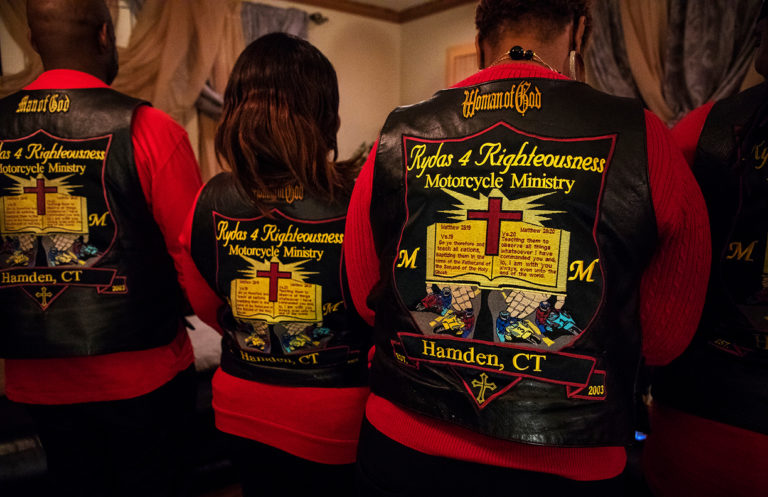 Trinity sits with her manicured hands folded neatly, flanked by her fellow Christian motorcyclists on a black leather couch. Mary Magdalene, Zephaniah, and II Timothy sit to her left; Sheba and Eve to her right.

“I like to wear pumps when I ride,” Trinity says. “My husband doesn’t like it, but I like the look.” Sheba, whose name appears on a black, diamond-bedazzled headband and in a tattoo in Gothic lettering on her right arm, laughs in agreement. “I wear a dress with leggings on my bike all the time.”

Each motorcyclist wears a bright red shirt under a leather vest embroidered with a rider name (“Zephaniah”), a leadership position (“Road Captain”), and various patches ranging from crosses to quotes like “Christians aren’t perfect…just forgiven.” The back of each vest is emblazoned with a canary-yellow Bible inscribed with Matthew 28:19-20 and a crest that reads, “Rydas 4 Righteousness: Motorcycle Ministry.”

Trinity (legally, Melanie Perry) is the president of the Connecticut chapter of Rydas 4 Righteousness. To put it simply, members say, R4R is “a church on wheels,” bringing Christianity to communities by motorcycle rather than requiring individuals to come to church themselves. R4R was founded in 2002 by Trinity’s husband, Solomon (legally, Arthur Perry), who is currently the ministry’s national president. Now in its sixteenth year, R4R maintains chapters in Ohio, North Carolina, and Connecticut.

Riding makes spreading the word of God far easier for the eighteen-member chapter, and allows them to bring a new approach to traditional ministry work. “I wanted to be that light,” Sheba says. “I just wanted to be different.” Eve, a member with black, thick-rimmed glasses, short, dyed-blonde hair, and glittering diamond hoops, echoed her sentiment. “I thought that combining ministry and motorcycles, because [each is] just something that I’ve always had a love for—it’s just the best thing since running water for me,” she says.

As a co-ed, mostly Black motorcycle club, R4R challenges what people see in movies like Hell Ride and Wild Hogs and hear in songs like “Motorcycle Man”—motorcycle culture is typically portrayed as non-religious, male, white, and felonious. The women of R4R defy stereotypes. “Just by seeing a female on a bike, [spectators] are going to stop me, and they’re gonna wanna know, ‘Wow. You’re a woman, you’re riding a bike. Why?’ Then I get into my name, then I get into my Scripture, and then it opens up the door for ministry,” says Trinity.

The ministry’s members primarily focus on prayer and community outreach. Over the past five years, R4R has held a back-to-school backpack drive, built homes for Habitat For Humanity, given away turkeys and hams on Thanksgiving, and sponsored a “Lupus Ride” to raise donations for the American Lupus Foundation. As for prayer, the ministry readily assembles when others call on them. “I wanna say we’re like first responders,” Eve says. Her fellow members murmur in agreement. Other motorcycle groups call on R4R when prayer is needed, and the group comes to people’s homes to pray for family members who have died.

R4R’s biggest event by far is its “Annual Bike Blessing” weekend held for the last fifteen years and attended by Motor Cycle Clubs (MCs) from all over the country. Trinity explains that other clubs typically will not come to an event held at a church, out of fear of being judged by churchgoers for a lifestyle of drinking, smoking, and swearing. So R4R holds a prayer service in New Haven’s Career High School instead. Trinity says that even though other MCs “don’t ‘do church,’” they never fail to attend.

Other motorcycle groups differ from R4R not only in religious disposition, but also in their treatment of male and female riders. “Because we’re a motorcycle ministry, we’re kind of separated from protocol, from the [motorcycle club] world,” Trinity says. In many other clubs, men and women ride separately, she says.

Eve adds that although more women ride today, she shared the road with far fewer female riders when they first organized their motorcycle ministry. “When we started sixteen years ago, if you saw a woman on a motorcycle, you questioned their sexuality,” Eve says, prompting Sheba to exclaim, “Somebody asked me that yesterday! He said, ‘Are you gay?” I said, ‘No.’ He said, ‘I thought all women on bikes were gay.’ I was like, ‘What?’” Once, while surveying bikes at a Harley-Davidson dealership with her husband, a man approached Eve and asked, “‘Did your husband get the sissy bar put on the back for when he’s riding you?’ I just looked at him and laughed,” Eve remembers. “I said, ‘Riding me? I rode that bike off the showroom floor.’”

Before Trinity joined R4R, she was apprehensive about riding. She didn’t think it was possible for women who rode motorcycles to also be feminine. Yet, from the moment Trinity learned to ride, she was hooked. “Now, I’m one of those women,” she says. “It became my serenity.”

When Trinity passed her license exam, she was sure to tell her husband that she’d beaten his score. “He said, ‘I don’t believe you can ride.’ I said ‘Pull your bike out,’” Trinity recalls. “I had hair rollers in my hair, I had bedroom slippers on. He was like, ‘You can’t ride with bedroom slippers on.’ I said, ‘Watch me.’”

Trinity began to spend all her spare time on her bike. She says that her dedication to riding has only grown since she lost her brother, also an R4R rider, to a motorcycle accident eleven years ago. The Ministry was out on the highway when, in the middle of a turn, Trinity’s brother accidentally veered onto the dirt. He flew off his bike. and died a month later in the hospital. Trinity says that her brother taught her a lot of what she knows about riding, and she has no intention of slowing down. “I thought I would do him an injustice by stopping. Because he was passionate about riding. He was a rider rider.”

The passage from Matthew on the back of each motorcyclist’s vest reads, “Go ye therefore and teach all nations, baptizing them in the name of the Father, and of the Son, and of the Holy Ghost.” R4R’s motto is a corollary to the passage: “reaching the lost, one soul at a time.” As a ministry, R4R’s members fulfill their mission by helping freewheeling “souls.” But they also do this for each other. “They have come and cleaned my house, brought my family food, visited me every day in the hospital, picked my kids up from school—it’s not just an organization we’re part of,” Eve says. “When I say family? Family.”

—Zola Canady is a first-year in Trumbull College.