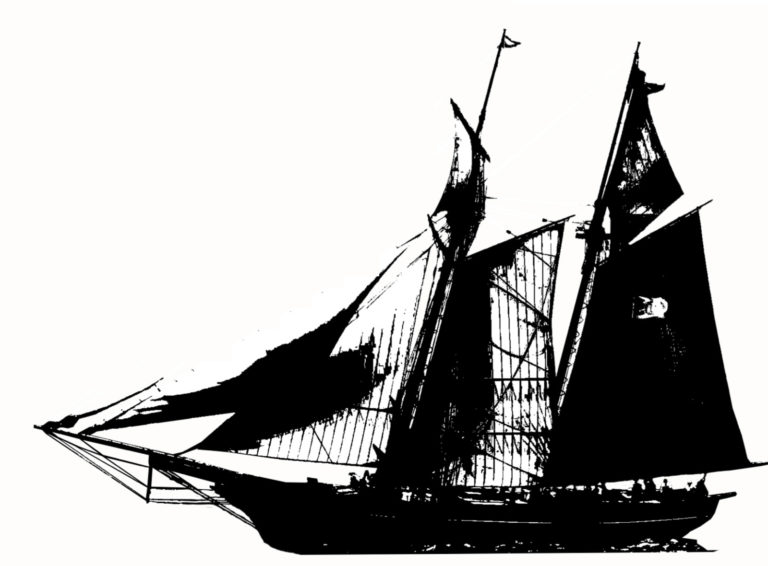 The enslaved people would have slept down here,” the shipmate told us, gesturing to the room. “They would have been among the barrels and other cargo on the ship. On the night of their mutiny, they crept onto the deck of the ship where the staff and crew members were sleeping.”

Twelve small bunks with cloth curtains drawn across them lined the walls of the hold, alongside a mini kitchenette with a sink. The lighting was darker and the air cooler underneath the ship’s deck, where we could hear the murmurs and footsteps of the teachers and their families above, buzzing with excitement for the upcoming sail on the Long Island Sound.

An hour ago, I had crossed the gangplank onto a fully functional replica of the Amistad, a two- masted schooner that in 1839 was the scene of the rebellion of fifty-three enslaved Mende people. After successfully overtaking their captors aboard the ship, the Mende attempted to sail back to Sierra Leone. But their plan was thwarted by the Spanish navigators who stealthily turned the ship in the opposite direction at night. Two days later, the ship landed in the New Haven Harbor. Soon began what would be one of the first human rights cases to make it to the U.S. Supreme Court.

When the Amistad docked in New Haven in 1839, the courts did not know how to legally classify the Mende people on board. Should they be punished for their rebellion? Granted freedom? Sent home? On the one hand, the owners of the Amistad had engaged in illegal activity: the U.S. and Spain, where the ship was from, had already pledged to abolish the international slave trade. On the other hand, slavery itself was still legal in the U.S., and mutiny and murder were not; the Mende had killed two crewmates during the rebellion. The courts imprisoned all fifty-three of the Mende people, including their leader Sengbe Pieh, or “Cinqué,” in the New Haven jail for two years, until their trial finished. But the court proceedings, in which John Quincy Adams acted as the captors’ attorney, became a rallying cry for the national abolition movement. In 1841, the Supreme Court upheld a lower court ruling that the Mende had acted as free men and fought to escape illegal confinement. Thirty-five of them chose to return to Sierra Leone the next year.

Standing under the low ceilings of the ship hatch, I thought of a past when the walls were gone, the empty cavern filled with food, drink— and people, living in inhumane conditions, torn from their loved ones and home country. But as the shipmate led us back up the hatch onto the deck above, we sailed past Lighthouse Point Beach, past the shoreline houses in East Haven, through blue waters below blue skies that faded to orange and pink. The ship’s shrouds stretched up to the sky with crewmates climbing up and down them, the white sail billowed, and the “Amistad” pendant curved with the wind. While the replica ship was meant to commemorate the original’s harrowing history, it is also meant to inspire a new generation of students to try to end the legacy of slavery and celebrate the teachers making this happen. The ship hearkens back into the past, but it also sails forward.

I had signed up for a New Haven public school teacher “sunset sail” organized by Discovering Amistad, the non-profit that now owns the replica ship. Built in 1999, the ship has a crew of between six and twelve people at any point and sails around the Long Island Sound, docking in New Haven, Bridgeport, and New London, among other towns on the Connecticut and Southern New York coastline.

Jason Hine, Discovering Amistad’s chief educator, enthusiastically greeted each teacher as they boarded the ship. Wearing a baseball cap and a Discovering Amistad polo, he stood near its bow during the sail, chatting with the teachers around him. He has told this ship’s story hundreds of times. Before joining Discovering Amistad, Hine served as a high school Social Studies teacher in nearby Lyme, Connecticut. Now, he organizes educational sessions about the Amistad in local schools, and he takes students out to sea.

Aboard the replica ship, Hine and his crew show students how different parts of the ship tell different stories. At the helm, students can see the wheel that the Spanish crewmembers secretly turned towards New Haven at night. Students stop at the hatchway from which the Mende emerged on the night they took over the ship, and as they walk along the deck, they trace their hands on railings and structures similar to those from the original ship—made of lumber from Sierra Leone.

Hine sees the ship as a chance not only to engage with the past, but also the present.

“The fact that for years and years this story had not been told and was not known was a real tragedy.”

“We are talking about the Amistad,” Hine told me, “and almost two hundred years later, we’re still wrestling with the same issues.” When Hine asks students how the story of the Amistad connects to the present, they connect the dehumanization of the enslaved Africans to “how Donald Trump talks about Mexicans or people from other countries” or the plight of the Mende to “Colin Kaepernick taking a knee in solidarity with Black Lives Matter.” Hine said that he hopes that students learn to become comfortable with having a conversation about race.

Hine isn’t the first person in New Haven’s recent history to find and celebrate the story of the Amistad. In 1986, Reverend Peter Ives was digging around the back of his Center Church on the Green when he found dusty pamphlets describing the history of the Amistad in a “very brief fashion.” Ives had lived in New Haven in his teenage years but knew nothing of the event.

“I began to investigate what this was, and I realized that no one in New Haven at that time had any idea what this was all about,” Ives told me over the phone. “The fact that for years and years this story had not been told and was not known was a real tragedy, that kids over almost a hundred years or so really didn’t know this story.”

That night, he called up the late Reverend Edward Edmonds, a prominent African-American minister from the United Church of Christ on Dixwell Avenue, and Al Marder, a New Haven activist for causes ranging from world peace to communism. The three decided to ask then- Mayor Biagio DiLieto to appoint an Amistad Committee comprising one hundred reverends, scholars, and popular community figures, half of whom would be African-American and the other half white. After two years of preparation, the committee celebrated the 150th anniversary with months of lectures, banquets, dramatic readings, and youth marches, along with video, opera, and book productions, and an Amistad Choir. The centerpiece of the celebration was a commemorative statue that still stands today in front of City Hall, featuring Cinqué in three settings—his homeland (in Sierra Leone), the courtroom where the trial took place, and in New Haven after his freedom.

I first learned about Ives, Edmonds, and Marder’s efforts on a snowy March afternoon, sifting through boxes of Amistad Committee materials in the Whitney Library at the New Haven Museum. The library—full of local archival material—is snugly located in the back of the museum, at the end of a marble-floored hallway. I was the only person there, save Frances Skelton, the reference librarian, who helped me find the boxes in a back storage shelf. I was surrounded by pieces of New Haven’s history—genealogy books tracing back the oldest inhabitants of New Haven, yellowing maps of the city, centuries-old scrapbooks telling the story of a city of another time. As I paged through boxes of the Amistad Committee’s minutes, receipts, invoices, and typewritten letters, a narrative of its work over the years began to emerge. Here were the records of Marder’s efforts to do everything possible to bring the Amistad back into the public
consciousness. “The original Amistad Committee of 1839 helped to shape the course of New Haven’s history,” he wrote in a letter to each member of the committee members on the eve of the opening ceremony that would kick of their yearlong effort. “We the Amistad Committee of 1989 are also making history in our recognition of this event and providing a lasting tribute to its lessons.”

“Walk around New Haven, and centuries of history surround you, from the names of streets and schools to lingering statues and monuments.”

While Marder, Ives, and Edmonds led the struggle in the nineteen-eighties and -nineties, a younger contingent of New Haven history keepers have started a movement to help students remember all of America’s history, especially the stories that often go untold. Students for Educational Justice (S4EJ) is comprised of New Haven students, mostly high schoolers, who have successfully lobbied to include Black and Latinx history in all Connecticut public high school history curriculums with the passage of Connecticut House Bill 7052.

On an August afternoon, fifteen of S4EJ’s students sat in folding chairs arranged in a circle at the Institute Library. They quietly chatted among one another, until Chinedum Nnodum, the program director, asked the group: “Do you all know the story of the Amistad?”

Solemn students shook their heads. In total, five out of the twelve students in attendance had heard about the Amistad. Anthony, a senior at Common Ground High School, said he had learned the story as a sophomore in a class on local history. Bryson, a senior at Cooperative Arts and Humanities High School, recalled that his grandfather told him a joke about the Amistad when he was twelve. But for most, the ship’s name didn’t ring any bells.

“It’s very important you know the story,” Nnodum said. “Especially considering the work we are doing.” He explained that the people on board the Amistad were “enslaved people,” not “slaves”—the latter suggesting that they were property or objects, not people. And he described how the event had complicated New Haveners’ perceptions of what it meant to be free or enslaved. “It helped shake entrenched racism in America and New Haven,” he said.

Briyana Mondesir, a member of S4EJ and a sophomore at Washington and Lee University, joined the group when she was a student at the Cooperative Arts and Humanities High School. “I felt so many times in school that the history we learned wasn’t history relevant to my life, or history essential for understanding identity in this space,” Mondesir told me at the meeting. “History can be really relevant if you can walk through it. So many stories of people of color took place right here in New Haven—it’s incredible.”

In 1999, the charter school network Achievement First opened the Amistad Academy Elementary School, Middle School, and High School in the Dwight and Newhallville neighborhoods of New Haven. The New Haven Museum now hosts a permanent exhibit featuring a large portrait of Cinqué, and Marder founded the Connecticut Freedom Trail, which marks 150 spots in Connecticut related to the abolitionist movement, including some recognizing the Amistad.

But how many people who pass by these mentions of the Amistad remember the ship’s story? Walk around New Haven, and centuries of history surround you, from the names of streets and schools to lingering statues and monuments. These names have passed the test of time—but do we remember the stories and significance behind them?

Every name that dots the city has its own story. It’s worth hearing the one that Marder, Ives, Edmonds, the students of S4EJ, and Hine and his crew have all worked to remember.

– Helena Lyng-Olsen is a sophomore in Pierson College.