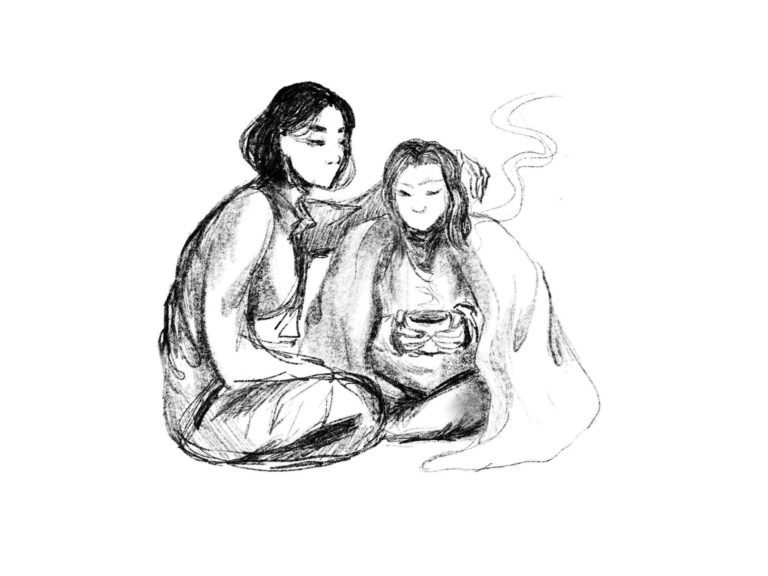 Before I learned the word uterus, I knew all about the baby palace. That’s what my mama called it, placing her palms over the soft lower region of her stomach. I’d stare down at my naked abdomen and wonder—how could there be a whole palace built within me? Was I that cavernous?

To me, the uterus wasn’t a mass of delicate tissue, arching fallopian tubes, and pulsing blood vessels. It was a glittering hall carved directly into the skeleton of my body—something akin to the Hall of Mirrors in Versailles, with gothic arches galore. All built into me. It’s fragile, my mama would repeat to me, again and again, throughout my childhood. It’s something precious, something to be cultivated and held gently between my fingers. Once it’s gone, it’s gone forever.

Years later, when I was eleven, my snarky-mouthed health education teacher slapped two freshly photocopied diagrams on my desk. The Male Reproductive System. The Female Reproductive System. There it was, that palace from my dreams, reduced to hazy lines and arrows and the bitter scent of ink. According to my teacher, the female reproductive system was like a machine. Each month, she said, the uterus discarded its lining, which had been thickening in preparation for a fertilized egg—resulting in the flow of menstrual blood and tissue out of the cervix. I stared, confused, at the diagram, realizing that I didn’t know how to fill it in. Was that the cervix?

As I used my favorite purple mechanical pencil to fill in the diagram, my friend leaned over to whisper in my ear, “I got it. Two months ago.” She drew a dot on my paper—a period. I gaped at her, in absolute awe. “But I hate it so much,” she divulged with a sigh. “The first time I had it, I couldn’t get out of bed. It hurt that much.”

Over a lunch of dumplings (mine), and chocolate milk (hers) in the cafeteria, she told me horror stories. She had worn white pants to school and heard snickering behind her in the hall before she realized her fatal mistake. Over the summer, she had snuck her bloodied bedsheets into the washer before her little brothers saw. She whispered the secrets of supposed womanhood to me—how much chocolate she’d eaten the night before, how much Advil she’d downed, and her first time trying out a tampon. My eyes grew wide with each parcel of new information I tucked into my pocket, until menstruation morphed into a bloody monster, out to ravage my innards and turn me into a mass of vessels and flesh and pain.

At home, my mama kept repeating the phrase to me. Baby palace. I stared at the small collection of pads we kept under the sink for my sister—overnight, winged, extra-long, daily, liners, tampons—like a buffet of cotton and plastic and adhesive. It was coming for me, I thought. Watch out.

When it finally came, one day before the start of eighth grade, I was shocked at how anticlimactic it all was. I simply grabbed a pad from under the sink and went about my day as usual. But I knew it wouldn’t always be as simple as that. Decades, maybe even centuries, of knowledge that my mama’s mama had passed onto her—an unbroken chain of wisdom—had now fallen onto me.

My mama grew up in a stone-floored house in Taichung, Taiwan with a blood-red-tiled bathroom that overlooked humid rice fields. As a child, she used to perch on a chair near the kitchen and watch her mama cook—congee, soy sauce marinated roasted tofu, tea-boiled eggs, and braised tofu skin, her favorites. While inhaling the smells of her mama’s cooking, she absorbed everything she needed to know about the body beneath her fingertips—its simultaneous egg-shell fragility and frightening resilience. All this, without uttering a single scientific term. When her stomach ached, her mama would massage the soft webby flesh between her thumb and index finger to relieve the pain, and bring her a cup of steaming ginger tea. When she succumbed to nausea and sweats from heat stroke, her mama would scrape a porcelain spoon down the back of her neck to release the boiling heat within her body. After showering, she religiously dried her short bobbed hair each night—wet hair invited in cold winds, or qi, the enemy personified when it comes to the baby palace. Every part of the body could be beautified and cared for in some way—whether it was taking spoonfuls of sesame oil to make her boobs bigger or eating cold foods like grapefruit to cure breakouts. That way, my mama’s mama continued to care for her, even after she passed away when my mama was seventeen.

To her, this wasn’t just Traditional Chinese Medicine, or, in the colder, impersonal terms that American scholars use, TCM. This was just her way of balancing along with the precarity of being alive—of catering to both sides of nature, one fiery, hot, and flashy, and the other, cucumber-cold. Of holding hands with your own qi, or life spirit, instead of scolding it, rejecting it. Of living and breathing her mama’s memory.

Twenty-five years later, in a lavender-walled kitchen in Connecticut, my mama told me, aged eight, about the imbalance I harbored within me. Each winter, I’d fall victim to long, unquenchable bouts of asthma-induced sinus infections—months of wet coughs and shortness of breath that forced me to carry around tissue boxes in my backpack, much to the delight of my friends. But, at the same time, I’d break out in hot flashes and flush easily, or get rashes on my skin. They’re both such strong forces within you, she said. The hot and cold qi. You’re just like your dad. We need to find a way to balance these within you, or you’ll always be like this.

So when my period made its appearance several years later, my mama brewed up a strong-smelling, maroon-hued herbal chicken soup, and watched carefully as I drank an entire bowlful. I might’ve pretended to make a face at the taste, but I secretly loved it—the woody bitterness of it, the impossibly dark hue. After I finished every drop of that broth, she introduced me to what I then saw as yellow-tape restrictions.

No unboiled water. Absolutely no jumping straight into bed or leaving the house with wet hair. No raw vegetables and fruits, specifically cucumbers, mung beans, oranges, and watermelons—save them for five days later. Green tea and ice cream are big no-nos. Lifting heavy objects, and heavy labor in general, should also be avoided at all costs.

I stumbled upon each of these transgressions during my thirteenth year. One autumn night, I showered late, around ten o’clock. I crept into my room, trying to slip directly into my warm bed, my hair still dripping. But my mama was there, next to me, ushering me into the bathroom, where she blasted the hair dryer on full heat over my head for a full fifteen minutes. When I whined with exhaustion, she turned off the blow dryer and looked me directly in the eye with the badassery only mothers have. “You’ll regret it if you go to bed with wet hair.” After my cross country meet, I ran to the sink, parched and overheated, to inhale a glassful of cold water, which my mama promptly replaced with steaming hot water straight from the kettle. I set the hot water down on the counter, claiming I’d rather die of thirst than drink something hot right now. On one of the hottest days of July, my best friend and I brought chocolate froyo from Costco, and I took one nervous bite of it. As a syrupy chocolate mouthful melted on my tongue, I felt an instinctual psychosomatic ache in my lower stomach, as if I’d committed a tiny rebellion against myself. I imagined my baby palace within me shrinking, cracks forming in its magnificent pillars. Shuddering, I handed the sticky container to my friend, who happily finished off the rest.

The public enemies I listed above supposedly chip and wear away at the baby palace, just like acid rain on the sculpted marble face of a statue. The consequences involve irregular cycles, aching cramps, nausea, or even the eventual disappearance of your period—all foreboding, telltale signs that your qi is now working against you.

One January morning of my junior year of high school, I walked to school with my friend in fifteen-degree weather. The saliva froze on my tongue each time I opened my mouth to laugh. My friend’s dark curly brown hair was dripping wet from the shower, and froze to a crunch by the time we entered our school’s parking lot. Between my fingertips, the curls had solidified. Before I could stop myself, I told her that she shouldn’t go out with wet hair. It’ll make your period cramps worse, I said. She looked at me straight in the eye with a hint of defiance and said, “Well, do you have scientific proof?”

We parted ways a little frostily that morning.

A few years later, as a third-year student at Yale, I flitted from one corner of campus to another in my oversized, secondhand beige jacket, warming my hands in my pockets. I felt myself mired in a freedom almost too loose to be true—like a pair of baggy tights that sagged in all the wrong places. In the dining hall, I could grab myself an entire plate of sliced raw cucumbers any time I wanted. I could even pour myself a brimming ice cold coke, and finish off my exceedingly cold meal with some ice cream. I could wash my hair at 2 a.m. and jump straight into bed after an exhausting night of pretending to listen to a boy rant passionately about his physics research. I could enjoy a cup of matcha tea in between my two seminars alone in my room, watching the steam rise, in this peaceful, tea-leaf-scented moment of rebellion.

College, for many, is synonymous with freedom. Breaking free. But for me, I drew my own practice of my mama’s and her mama’s beliefs like a quilted throw blanket around me—a refuge from the chilling open air of being one small girl with a soft, low voice in an enormous college campus filled with go-getters and big talkers.

The more I dried my hair after late-night showers, the more I drank hot cups of steaming water in the dining hall (I’ve survived endless strange looks from friends and strangers), the more I avoided the salad bar during my time of month, the more I danced the complicated dance with my own qi, the more my body thanked me. The more my mind and heart thanked me.

For the first time in my life, I felt a warmth within me rising—a new strength, a new kick in my stride as I bounded down the stairs of Berkeley College North Court in my new white Fila sneakers. It’s hard to pinpoint exactly what made me feel suddenly so spirited, so healthy, so joyous. Was it the generations of knowledge not just falling upon me, but also enveloping me? Taking me in? Or was it the warm, callused hand of the grandmother I’ve never met suddenly holding onto mine?

—Candice Wang is a senior in Berkeley College and Editor-in-Chief.