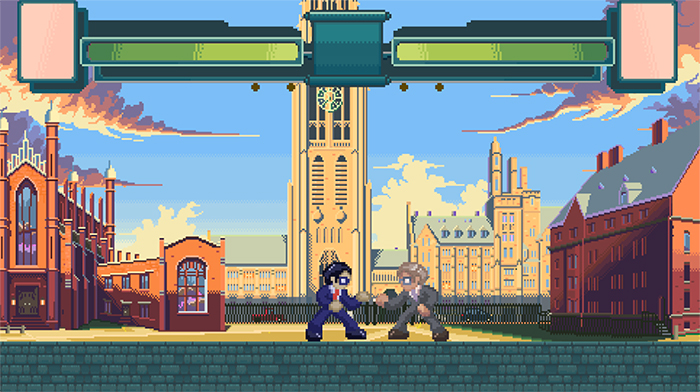 Salovey and Chun square off in a student-built Street Fighter game.

From Harvard came Facebook, from Stanford came Google. Will Yale be next to gain Silicon Valley fame?

On a Sunday afternoon in mid-September, a group of twenty-odd students gathered in an otherwise empty Watson Center. Staring intently at their screens and typing in silent determination, the students worked with unwavering focus on their contribution to the internet’s next major site. Welcome to the future, readers. Marvin Kombat Bulldog Bash lies just around the corner.

Students in Amoriem Labs, a video game design club of undergraduates, are developing a Yale-themed street fighter game, akin to a simplified Super Smash Bros or Tekken. Instead of dueling with Kirby, Peach or Falco, however, players of this soon-to-drop game will fight as Marvin Chun, Peter Salovey or Handsome Dan, throwing punches and dodging fire-powered blows on a pixelated replica of Yale’s campus.

Modeled after nineteen-eighties video and arcade games, Marvin Kombat Bulldog Bash can be played as a “local multiplayer,” in which opposing players control their respective fighters from opposite sides of the same keyboard. Two students sitting next to each other in section mashing away on the same keyboard might have a hard time avoiding detection by their professor, but club leaders have tentative plans to make single-player and online multiplayer versions as well.

Eric Doddy, a club member majoring in art, demonstrates the process by which he creates the Salovey, Chun and Handsome Dan images. After he sketches the characters on paper, he recreates them on his tablet with remarkable precision. Perhaps most impressive are Amoriem’s Salovey and Chun avatars: though the two differ by little other than hair color, most students will likely be able to easily identify the two.

To simulate continuous movement in the avatars, the game toggles rapidly between a set of hand-drawn frames. When players unleash their attacks and behold, say, their Salovey character launching a lethal kick, they are really watching the program rotate rapidly through a series of images: Salovey standing upright, Salovey half-way through his kick, Salovey finishing his kick. Be it Handsome Dan blocking a punch or Marvin Chun jumping through the air, every movement of each character requires its own unique set of drawings. If the game’s creators continue to add features to the game—a chicken tender attack and DUO mobile buffering traps are among the proposals under consideration—even more frames will be required.

Amoriem’s scrupulous attention to detail can also be seen in the game’s audio, which features a  backdrop of independently-composed music. Ethan Pesikoff, a junior majoring in Math and Near Eastern Languages and Civilizations, did much of the work to create the game’s current soundtrack. He says the music for Bulldog Bash is inspired by a Balkan folk music band—Taraf de Haidouks—that he “really likes a lot.” To make the music for the game, Pesikoff begins by composing a melody and writing out the notes—he does so on a computer program but points out a student to his right who was doing the same with a pencil and a piece of paper—and then adapts the tune to match the game’s retro style. In its current form, the music’s computer-generated notes carry the energy of Halloween-themed trance music written for pre-2000 Nintendo.

One possible issue the club could face is its use of the names and likenesses of university officials. Asked whether she was concerned about such a prospect, student leader Christie Yu was undisturbed. “Worst case I think we can just change Peter Salovey to Seter Palovey or something like that,” Yu said.

The creators of Bulldog Bash expect the game’s old-school style to be popular among students, but the design’s simplicity also makes the avatars’ movements easier to replicate. “The pixelated style gives us more room for our own input,” Doddy says. On his screen he pulls up a series of hyper-detailed drawings he has sketched for other games—mystical-looking knight characters with cloaks and long daggers—and explains how labor-intensive it would be to hand-draw the necessary number of frames for such elaborately-drawn characters. The game’s relative simplicity also gestures to the club’s main goal: to provide interested students with a space to develop their game-designing skills.

In their north campus meeting spot, the club’s members sit around rectangular arrays of tables and form mini-departments of impressive efficiency—the musical composition team sits at a set of tables in the room’s center, with the graphic design team across from them and the coding team to their left. With nearly two dozen students working on the game at once, the group maintains levels of focus and concentration reserved usually for final exams; rarely was the quiet clatter of steady typing interrupted by anything louder than a cough. Halfway through the meeting, Isabella Yang, a student-leader working on Planet 112—a space colonization game that Amoriem is also creating—suggested to her team that they take a short break. The students in her group quickly clicked onto other tabs, closed their laptops, or quietly pushed out their chairs to stretch their legs for the prescribed rest. No such breaks were announced on the other side of the room, where the club members continued working with tireless commitment on their chicken tender assaults and Handsome Dan defenses. Though a far cry from The Social Network’s scenes of adrenaline-fueled coding marathons interrupted only by shots of vodka and the cheers of beautiful women, the group impresses in its own way.

As to when exactly the game will be available to play: Yu shares a concerned look with the clubmate to her left. “I mean, we say it every year but … definitely this year.” She pauses, then nods vigorously twice. “Definitely this year. For sure.”

Yonatan Greenberg is a junior in Saybrook College. 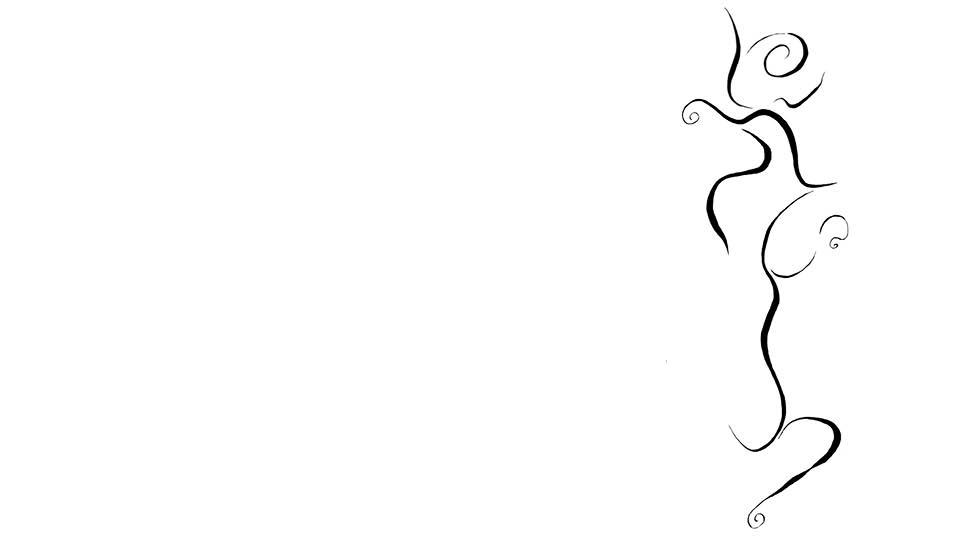 the revolution of the left hand