When I entered the cafeteria of the K-8 Wexler-Grant Community School, a New Haven K-8 school, at 10:15, it was crunch time. Five lunch ladies, dressed in matching red-collared shirts and hairnets, were scooping canned apricot halves into small plastic containers and covering the pans of lettuce and chopped meats with foil. When the apricots ran out, they moved onto applesauce. One of the ladies stepped forward, an unofficial spokesperson for the group. “You need to do something about this,” she said, motioning toward the food. “Why would you give kids this on a cold day? A chef salad and it’s all cold!”

The first onslaught is at 10:30 a.m.. The youngest kids at Wexler-Grant Community School rush into the cafeteria. Large and open, with patterned linoleum on the floors and plastic tables with built-in stools, it looks just like any other cafeteria. Kids play musical chairs as they vie for the best seat. From doors on either side of the cafeteria, students file through the kitchen, choosing from today’s spoils: a chef salad of iceberg lettuce with sparing amounts of shredded carrots and purple cabbage, with chopped deli meats—one lighter, one darker, both amorphous—shredded cheese, and ranch dressing to add on top.

At Wexler-Grant, salads don’t fare well at lunchtime. Today, many kids opt for the back- up option—a cheese-and-unidentified-meat sandwich. “My meat had black dots on it,” one third grader reports to me, disgusted. “That’s the spice, stupid!” his friend informs him.) Still more plates filled with dressed lettuce find their way quickly to the trash, as kids make do with canned fruit and precious cartons of chocolate milk.

But salads are not the only foods that end up in the trash according to Louise Pierce, a self-proclaimed “Cafeteria Mommy,” who has been working at Wexler-Grant for two years. Wearing red pants and a matching turtleneck, Pierce patrols the cafeteria, setting out plastic silverware and fruit cups when the tide of students ebbs. When the kids enter with shouts of “Hi, Ms. Louise!” she monitors the meal, shushing the loudest voices and checking in as they eat. If she knows anything, she knows what kids like—and what they don’t. “They waste more food than they eat. There was an eggplant parmesan sandwich that all went to waste. And an Asian chicken-broccoli stir-fry thing; it all went in the trash.”

The school lunch has been an American institution since 1946 when congress created the National School Lunch Program. Today, public and non-profit private schools from pre-school through high school are eligible to receive federal reimbursement for the cost of the dining programs, and certain foodstuffs are provided by the USDA. These reimbursements cover the cost of students who qualify for a free lunch—80% of students in New Haven public schools—but they do not add up to much. The USDA pays New Haven $2.50 for every free meal they serve. The small sum is intended to cover the cost of overhead, personnel and ingredients for a healthy, filling lunch.

“It’s a whole giant mess the way the system works,” says Chef Timothy Cipriano, executive director of New Haven Food Service Department. “$2.50 is supposed to cover the cost, which it doesn’t.” Since the inception of the National Lunch Program, regulations have been periodically updated. Until now, this has meant intermittent recommendations to cut fat content in meals or add vitamins. In October of 2009, the National Institute of Medicine released its first new guidelines since 1995, which featured limits on calorie and sodium content in the meals and requirements for more fruits and vegetables. The new recommendations have placed stress on the system. “We can’t even afford what we serve now. If we were to implement new recommendations, we’d be losing our shirts,” Cipriano says.

Bald and big-boned, Cipriano is on a mission when it comes to lunch. Some might say he has enough to focus on without new regulations that will increase his budget deficit. But he is a force to be reckoned with, even on the national level. When we spoke, he had just returned from a trip to Washington, DC, where he was meeting with federal officials to convince the USDA to increase federal subsidies.

But Cipriano is not your typical lunch lady. Serving 12,000 meals per day is no meager task, but the chef took it on with gusto when he came to New Haven from Bloomfield, CT in July of 2008. “I never looked at it like it was a monumental task,” he explains. “New Haven’s school population is ten times bigger than Bloomfield’s, so I just multiplied it all by ten. I didn’t want to psyche myself out. I just never let it bother me.”

At Bloomfield, he was known for innovative recipes and emphasis on local food. He brought Connecticut-grown produce into the high school cafeteria; The New York Times even profiled him for his work there.

New Haven has been a different story. When he took over in 2008, Cipriano replaced Aramark, the massive food services company that had managed New Haven’s school food for years.  Food service companies like Aramark are the norm for school lunch throughout the country. “The vast majority of districts still rely on major food service companies,” says Gordon Jenkins (YC ’07) who now serves as the school lunch campaign manager at Slow Food USA, a non-profit food advocacy group based in Brookyn. “But we’re beginning to see a trend of districts heading towards cooking from scratch.”

Cipriano is spearheading that transition in New Haven. “Everything was corporate under Aramark. People were scared of upper management. I’m not going to be that bad guy.” While it’s true that the unions were sick of Aramark, he explains, the food itself was the main impetus for change. Now, instead of getting food delivered by a national chain, food services work out of a central kitchen where Cipriano can control quality and order in bulk for better prices from regional sources. He offers more fruits and vegetables, salads, mashed potatoes (from real, roasted potatoes—not a box), working tirelessly to ensure that the ingredients are regional or local when possible.

But Cipriano’s vision is not always popular with the uniformed children who swarm the Wexler-Grant cafeteria in three shifts over the course of the morning. Kids wonder why they can’t have chicken nuggets every day, while adults question the decisions behind the food. “We should have a hot lunch and more variety, not just salad and bread in the winter,” says “Cafeteria Mommy” Pierce. “We have a state of the art kitchen in there and we only use it to reheat food? I’ll go in there and cook.”

Beatrice has been working in the Wexler-Grant kitchen for 11 years. “They stopped people in the schools from cooking. Now we’re getting these meals—some of them I can’t even pronounce—from a central kitchen. I mean, they say the food is good and healthy but I don’t know,” she says, shaking her head in dismay. “We stopped cooking and the kids throw it away more.”

Cipriano claims the central kitchen allows him to get the most bang for New Haven’s buck; when it comes to procuring high-quality local produce, ordering in bulk is the only answer. In 2008, New Haven purchased at least 12,000 apples, 6,500 pounds of butternut squash and 400 pounds of tomatoes. Meanwhile, the $2.50 benchmark looms over each decision. “A central kitchen keeps the costs down, and I’m looking for any way to expend the government’s dollar. It also gets the attention of regional suppliers,” he explains.

Since Aramark left, quality has improved, believes ‘Cafeteria Mommy’ Pierce, but she wonders whether that improvement is here to stay. “It started off better than Aramark, but now to me, it seems to be going down.”

But are the school lunches in New Haven healthy? Nutrient content of school lunch food is closely regulated by the federal government. Schools have to meet certain criteria to receive any reimbursement for the lunch. But the rules state quotas for vitamins rather than fruits and vegetables, which can be filled by just about any fortified food. This eases the budget issue for districts that are not focused on the nutritional value of their lunches. “There are absolutely schools that make the budget work, but they serve tater tots, chicken nuggets and a lot of highly processed foods which is something we don’t want to do,” says Cipriano.

Beatrice takes a look at the salad sitting under the glass. “The board says it is healthy, but this is not good meat,” she says, indicating the chopped, pink and white cubes that are spooned onto the mix of iceberg lettuce as the children grab their salads.

“This is the healthiest thing I’ve seen them eat in a long time,” says Elizabeth Bewley, a senior in Berkeley College who volunteers in a kindergarten classroom at Wexler-Grant. But are they eating it? “That’s questionable,” she laughs.

After all, how many six year olds like salads? Adalia and Alandra, two kindergardeners, profess to like their lunch as they pick through their lettuce and meat. Another boy, taking a bite of his whole-wheat roll, expresses a common sentiment of the dining hall: “I only like this.” While some kids clear their plates, most pick at one part of the salad or another. Some prefer the cheese, some the meat, others the lettuce. Either way, the trash cans are full of unfinished or untouched food by the end of each shift.

As I move through the cafeteria, the pint-sized voices are dying to tell me that they love the pizza that appears on the menu once per week. They don’t seem to know it is made with whole grains, and if they do it doesn’t bother them. There are also more elaborate dishes that are popular too. Barbeque chicken is a clear winner, with rave reviews from everyone from kids to teachers.

What else would they like to see for lunch?

“At my cousin’s school in Cheshire they even get jello!”

Pleasing the palate while keeping the food healthy is a tough balance in school lunches across the country. “You can’t just offer healthy food and expect that’s what the kids will want. It’s all about taste at the end of the day,” says Slow Food’s Jenkins.

Taste can be a tricky thing, especially when cafeterias push kids out of their comfort zones. Walking past a chattering group of cafeteria staff, I hear rumors of one school that accidentally got shrimp linguine for lunch one day (“I wish we had got shrimp linguine.”) and concern about the quality of ingredients “They always say there’s vegetables in the pizza, but it’s cooked to death!” says one employee who requests that her name not be used. “Everyone knows there’s no nutritional value in that whatsoever.”

Health is hardly her biggest complaint, however. “There is no culture in the food. Look around, we’re a largely minority school and we don’t eat like that,” she says, as she watches one of the lunch ladies scoop meat onto the salad. “They’re not even thinking about the types of kids they’re serving.” Cipriano has expressed interest in tailoring menus to reflect the rich ethnic communities of New Haven, but that will happen only in the years to come, he says.

“The kids at Columbus love their salad bar. Last year at Martinez we were sampling watermelon radishes and at Barnard they were handing me sungold tomatoes, excited to show me how delicious they were,” he tells me.

But Wexler-Grant has seen none of their innovations, and the discontent among the staff and students is palpable. Lunches at the school are prepared in a remote kitchen, have no face and no advocate. Cipriano wants to make cafeteria food in New Haven more personal, more interesting, and more genuinely healthy. But for true success, he’ll have to figure out how to cook food that doesn’t end up in the trash at schools like Wexler-Grant. 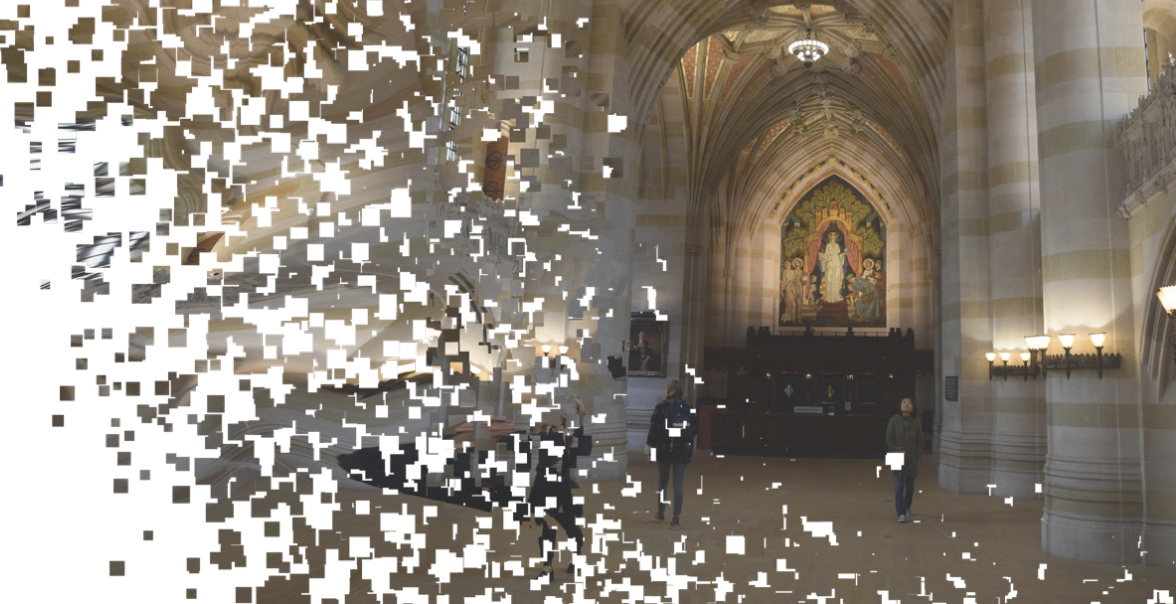