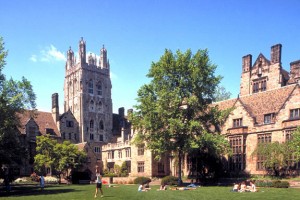 Tina Lee Hadari skips to the corner of the classroom with startling spunk for a woman in her third trimester. A young girl sitting in the middle of the room pulls a bow across the strings of a cello that is almost her size. “Am I warmer?” Hadari asks, crinkling her face into a smile as she peeks behind a piano for the teddy bear her student has hidden.

Hadari is the founder of Music Haven, an not-for-profit organization for budding string players who live or go to school in the Hill, Dwight, Dixwell and Newhallville neighborhoods, four of New Haven’s poorest areas. Few of Music Haven’s students have had experience with instrumental music before entering the program; few could afford lessons or instruments.

Music Haven itself is a young performer. In the fall of 2007, Hadari handed twelve youngsters wooden dowel rods with erasers on the end to practice holding a bow. The newly-minted musicians, generally around seven years old, proved responsibility by bringing the dowels to class each day and not breaking them. After a year, they were handed a more precious gift—a free musical instrument.

For the musicians of Music Haven, community is paramount. At Music Haven, says Hadari,  “this is a family; we take care of each other.” The program’s highly trained teachers—violinists Tina Lee Hadari (YSM ‘04) and Yaira Matyakubova (YSM ‘05), violist Colin Benn (Bachelor of Music in ’02 from Juilliard) and cellist Elise Pittenger (YC ’97) work hard to integrate themselves into the city fabric. Four days a week, each musician offers after-school lessons to twelve students at the Wexler Grant and John C. Daniels schools. By night, the group meets as the Haven String Quartet.

As members of the professional quartet, the four musicians bring world-class instrumental performances to the Elm City for free. Most chamber groups are based in an academy or conservatory, but the Haven String Quartet has an “urban residency;” the entire city is home turf. Though they play some ticketed performances in churches and other traditional venues, they play most concerts in libraries, senior residences, private homes and schools. Their aim is to make music “accessible to everybody within the community: financially, culturally, and location-wise” says Sarah Perkins, Program Coordinator. Any donations from the concerts go towards the lessons program and the instruments given to students.

As a professional group, the quartet members confront matters of teamwork, accountability, and musicianship – the same ideals that they emphasize with their pupils. Says Hadari, “we’re still trying to develop all the skills we want to impart to the kids, like communication, how we take care of each other. That’s the bigger goal of Music Haven: Through music, we’re trying to teach them how to be part of a bigger community.”

In 2007, after a year spent assembling a board of directors, applying for grants, and raising money, Hadari received the go-ahead to establish Music Haven in New Haven public schools. She called in analysts from the Yale School of Management to conduct a needs assessment to decide where to set up residence.

The program began with twelve students. It doubled to twenty-four students in 2009, and trains thirty-six this year. Its waiting list projects over sixty students for next year, at which point Music Haven may be forced to cap the program. All students receive free instruments from Music Haven, which obtains them at wholesale discount with help from local luthier Ute Brinkmann.

Music Haven even has a composer-in-residence—Hadari’s husband, acclaimed violinist Netta Hadari. Mr. Hadari composes music to accompany children’s books like The Lorax and Giraffes Can’t Dance, which the Quartet then performs while Mr. Hadari reads the stories. He is currently working on a piece called “Everyone Knows What a Dragon Looks Like.” The end result will give each quartet member a one-minute solo, played collaboratively with the New Haven Chamber Orchestra and the Music Haven kids themselves.

The Music Haven program is modeled after Community MusicWorks in Providence, Rhode Island, a non-profit organization that aims to unite a lessons program and quartet into a symbiotic entity. Hadari hopes that her quartet will “become more of a feature of the neighborhood” and “bring together a diverse audience” through local, long-standing relationships within the community. The community members must be convinced that Music Haven will not go the way of the many other well-intentioned but short-lived endeavors that originate from Yale. Money is an ongoing concern for an organization funded largely by donations and grants.

But the program is being noticed. Music Haven recently received an Arts Award from the Arts Council of Greater New Haven in 2008 as a “Ground Breaker,” an accolade given to “individuals or organizations whose fresh, raw ideas spur innovative programs.” And David Brensilver, Director of Communications at the Arts council, lauds the program as something that “no one else is doing;” in bringing instrumental lessons to students who wouldn’t have had it before.

Hadari does not think of Music Haven as catering to a particular group or ‘serving’ disadvantaged residents, though; instead, the organization should encourage community members of different social, ethnic, and cultural groups to mix. She envisions Music Haven expanding beyond the lessons program to become a “fun place for kids to hang out and play chamber music and talk about issues in their lives, almost like a youth group at church, but revolving around music.”

The program is still finding its footing, but Hadari is committed to helping it adapt and grow. As Hadari says, smiling optimistically and patting her own maternal bulge, “progress comes in baby steps.”

Marissa Grunes is a Senior in Saybrook College. Photo by merinews.com