No Mirrors in My Nana’s House

I’ve been thinking about mirrors. Mainly, I’ve been remembering that, for some months not too long ago, I took it upon myself to have a strange daily encounter with a mirror, every day except Sunday. Often I’d spend several hours in front of the mirror in the morning, and then again in the evening. I’d go home and eat alone in my bedroom, and I’d fall asleep soon after. I’d wake up and do it again. Because most days looked alike, I have trouble remembering them distinctly. So I was surprised when I realized a few days ago that I had kept this ritual alive for nine months—my entire sophomore year of college.

Mirrors provide us with an overwhelming amount of information about ourselves. That information—the clear and accurate image—is objective, or seems so. What I see in a mirror I take to be true and assertive, and because mirrors communicate with rare candor and immediacy, it’s easy to grow dependent on them. Mirrors show you where and who you are. Think, for example, of the experience of sitting across from a friend late at night, when she’s willing to tell you something about you. Seeing myself through others this way has protected me on many occasions. I am uncertain of myself otherwise. But as soon as I began asking mirrors for something specific that year, the need for information became dangerous. It became a quiet and desperate “I want, I want,” with an immediate response: the clear and accurate image.

I grew up dancing, and I rely on this sentimental-sounding phrase to explain that I began dancing well before I wanted to. For many years I danced as much as I played or worked at school, and when I came of age, I confronted dance as an inextricable part of my sense of self. Dancing places me squarely within my family and its dramas and daily life, because my family is full of dancers. My choice to go to college was, in many ways, drastically alternative. I was raised with the assumption that, someday, I would go on to dance full-time. When I return home, I find the assumption still alive.  Sometimes I think of my time here as a sanctioned, four-year vacation from being who I am. Tomorrow I’ll wake up and remember that I’m actually a dancer, and have been this whole time.

Part of the unique claim that dance has on a dancer’s identity is that, in order to become a good dancer, you must be raised according to its precepts. Most good dancers are children, their skill and talent not a consequence of choice, but of strict deference to figures of authority. And so when parents raise their children, they guide them toward what is useful in their endeavors. When dancers raise their children, they guide them toward mirrors. Nothing is so useful, because dancers use mirrors to understand their work. Terrifyingly, their work is their own bodies. To grow up dancing, I felt, was to learn that being hard-working and self-critical was not a matter of introspection, but one of constantly improving the way I appeared in a mirror.

When I arrived at college, I felt inadequate to my peers, homesick, and incapable of finding my way here. I knew I had come to Yale to find a place in the world, so at the beginning of my sophomore year, I Googled the closest ballet studio and started going every day. Nothing tells you who you are so accurately as a mirror; ballet studios are full of them.

I attended ballet class that year with a newfound desperation. I know this because if I try, I now remember those nine months as one continuous staring into the mirror, a time in which I kept noticing the shortcomings of my own body, and returning my gaze back to the image of my reflected eyes. Because ballet is an exacting art form, it quickly becomes psychologically disturbing, in its recursiveness and in its daily demands. Your leg is never high or long enough; there is always someone better than you. I found solace in looking myself in the eye threateningly, demanding of myself that I work harder. By the end of the year, I had overused my right hip flexor and developed a crippling anxiety problem. I had no idea who I was.

But there are some things from that time that I remember clearly. A dancer’s talent, for example, is measured in two ways: how much physical potential he was born with and has maintained, and how willing he is to grit his teeth and use it well. This appears to be a standard definition of talent, until you hear ballet teachers reconcile the two metrics and reassign students into multiplying categories. There are dancers “with great facility,” but who are lazy. These dancers often look as they should, but remain weak and careless. There are dancers who are “inspiring” because they work hard and “to their full potential.” These dancers don’t have the body to do well, but “love to dance.” Then there are dancers who are beautiful.

So few dancers strike this balance and achieve that distinction. Those who do often acquire an eerie, almost glassy look in their eye. They rarely find their own eyes in the mirror. Rarely do they look you in yours. I think, somewhere along the way, they’ve lost the sense that their bodies belong to them. Obedient now only to music and the direction of their keepers, their every movement is the consequence of a balance serendipitously struck long ago, when they were deemed beautiful children. After growing up disciplined, they earn a career, one in which they are woken up to rehearse, then again to perform. Their artistic skill is called, by many, “interpretive”—that is, at the whim of what they interpret. They work hard, but their work has the look of ritual. Watching those dancers is like watching objects suspended in midair, fragile because they’ll soon fall. Regardless, it’s beautiful. I’m not quite sure what I envied, but I think it was everything.

Dancers are called narcissistic, because they’re obsessed with the beauty of their own image. But beautiful dancers are no longer obsessed, per se; their beauty and talent is the very water they swim in—a banal and constant reality. Those obsessed are those of us in desperate need to see ourselves in the mirror and find the reflection a certain way. Narcissism is hardly the word: there is no erotic interest or latent egotism, no pleasure in the act of reflection. It is, more simply, a consuming aspiration, a sort of unhealthy relationshi—a dependence on a mirror that will never give you what you ask of it. It took me awhile to understand it, but eventually I think I did: it’s the dependency that develops when you love something, and it simply won’t love you back. If you are lucky and beautiful—if dancing somehow does love you back—the mirror is no longer useful to you. You get that look in your eye; you earn a career. Even after you fall and retire, you carry the look with you.

Around that time I decided to become an art history major. The work was a familiar, even convenient exercise, and I wasn’t ready to challenge myself more than I already was. It required looking at images and interpreting what I saw. I was more successful the more exacting I was, the more I demanded out of what I looked at. Most of the time, I neglected that work and performed it on myself instead. Such an intense and sustained look at yourself isn’t healthy; it doesn’t improve you and it isn’t what we’re at school to do. But by nature, I’m a very willful dreamer, and the situation complicated when a ballet teacher told me I had enough talent to quit college and dance full-time. Who knows if it was true—but I looked harder at myself regardless, and willfully called that looking a dream. A few weeks later, I couldn’t move my right leg at night. Sometimes I’d black out for seconds at a time; I think from nerves. I remember now that when I’d return to consciousness, I was usually looking at myself in a mirror—in a bathroom somewhere, or standing in front of the full-length in my sophomore suite.

One day, I did the reading for seminar and found some help in it. It was an essay on Édouard Manet’s “Un bar aux Folies Bergère,” by an art historian named T.J. Clark. Manet paints a barmaid attending her bar. Everything in the painting takes on the quality of a reflective surface. On display and for sale are a bowl of a shining clementines and two roses in a vase, liquor bottles with modern labels, and presumably, the barmaid herself. She shows a patron the fleshy insides of her forearms, and there’s a bunch of flowers collected at her cleavage. She has an eerie, almost glassy look in her eye. We get an overwhelming amount of information, however, from the framed mirror behind her. In its reflection, we see the sheer enormity of the Folies-Bergère—the lurid, electric lights, the hundreds of people, a trapeze artist swinging overhead. Amid the bustle, the mirror also captures a quiet exchange. The barmaid leans forward to her patron, in a delicate performance of femininity and supplication. The reflection shows one barmaid, servile and attentive—and yet her eyes suggest another, hardly servile and hardly attentive. It seems she’s forgotten where she is.

“A mirror is a surface on which a segment of the surrounding world appears, directly it seems, in two dimensions,” Clark writes. “As such it has often been taken as a good metaphor for painting.” The mirror may be a device that flattens, but it never fixes. Unlike painting, the segments of the world that a mirror captures are never rendered permanent. What’s flattened and framed by the mirror is always flickering and variable—subject to immediate and constant change. Clark continues, “there is literally nothing behind the barmaid but glass,” and he’s right. It’s just a piece of glass. He goes on to say that “there is a plain fact of vision somewhere” and, frankly, I wonder where it is. I wonder if, in all its plainness, the fact of vision is ever satisfying.

I kept asking the mirror for the plain and the factual, the immediately satisfying, and it never came. What’s most frustrating now is that, as many times as I looked at myself in the mirror that year, not one of those sustained stares still belongs to me. They’re lost now, or I’ve misplaced them. I have a large mirror in my bedroom this year, but I can’t find them there either, and maybe it’s best that they’re missing. Instead I have a few pairs of ballet slippers left and a drawer of practice clothes. They’re black and well-worn, and I cherish them now as surviving relics from a bad time.

My grandmother and I had a conversation about it all one afternoon, and I cried about it for the first time. She made a few promises: that even though I never trusted the mirror to show me so, that my body is strong and beautiful. She told me that this trouble was bound to come, but that it has passed. She promised that tomorrow I would wake up and remember that I am who I am becoming, and not who I am in the mirror, and maybe not a dancer at all. There was nothing immediately plain or factual about what she said, but for some reason, I’ve been better ever since. 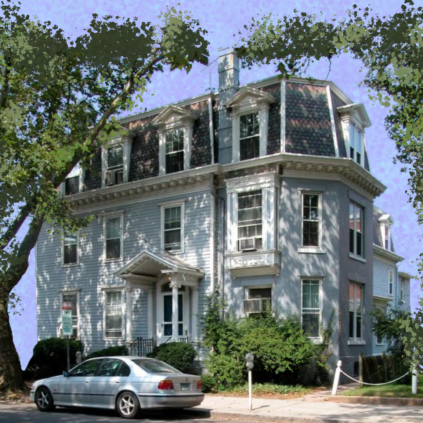