“WARNING: Travel at your own risk. Holy Land U.S.A. under construction.” A headless statue of Jesus watches over a path of broken asphalt. The path winds past the sign, through the entrance arches and around the hill, which is ringed by a low wall. People break off from the crowd. Even the girls in flats and skirts climb the wall and begin picking their way through the remains of a miniature Bethlehem. Under fallen trees, I catch of a glimpse of broken steps leading up through the rubble.

This Bethlehem is nestled in the hills of Waterbury, Conn. It marks the beginning of Jesus’ life, which Holy Land USA traces from birthplace to tomb. The park has been closed since 1984, but a restoration effort is now underway. There’s no set timeline for the park’s reopening, but board members expect it to take years. In September, Holy Land opened to visitors for one afternoon.

In the 1950s, John Greco, a local attorney, built Holy Land USA on eighteen acres of land near his hilltop home overlooking the city.

“No matter how much money he had, he devoted every penny into Holy Land, and he lived like Mother Teresa did. Everything was for God,” says board member Rebecca Greco Calabrese, Greco’s great-niece. “When you were with him, you felt holy…you felt it, coming out of his pores.”

The park’s buildings, constructed from old appliances, chicken wire, and plaster, are just a few feet tall, placed in clusters to depict different Biblical events. Most have collapsed. Those that still stand are pale, with little arched doors and windows. They cover the hill, competing with the twisted pines, birches, cattails, and thistles that have overrun the park.

“It was beautiful for a while,” says a white-haired woman dressed in black as she waits for a shuttle to the Mass. “There was almost a reverence about the place.” In the park’s heyday, buses brought forty thousand visitors a year from all over the U.S. and around the world.

When Greco died, the park was entrusted to a group of nuns, the Religious Teachers Filippini. The nuns eventually put the property up for sale in 2013, and Mayor Neil O’Leary and local businessman Fritz Blasius bought the property, planning to restore it. The restoration progresses in bursts, as its limited funding allows.

They set their milestones based on the liturgical calendar. First, they restored the cross in time for Christmas. Then they focused on clearing the overgrowth in time for the Feast of the Exaltation of the Holy Cross, which commemorates St. Helena’s discovery of the cross on which Jesus was crucified. Chuck Pagano, president of Holy Land’s board of directors, tells me that in the days leading up to the my visit, over 7,500 trees were cut down.

A friend and I still stumble uphill over shrubs and fallen branches until I reach Solomon’s temple, also in disrepair. A sign proclaims: “YOU HAVE MADE IT.” The temple is just a cement cylinder split in half to reveal a green interior. The cupola lies in the center of the wreckage, as though launched by a catapult. Next to it, other cubic parts of the structure deteriorate under their domes. We walk around the bend to find a sign that says: “JESUS IS LAID IN THE TOMB.” Unlike most of the structures, the building here is human-sized, and in relatively good repair. Mounds of pine needles weigh down the corrugated roof and the supports are more arch than wall, but the mother and daughter poking around the tomb don’t seem too worried about its structural integrity.

Despite the recent improvements, Holy Land USA still feels like it’s stuck in an abandoned past—except for the cross, which stands at the top of Pine Hill, surrounded by a fence that reads “Our Lady of Peace.” The cross is 52 feet high and 26 feet wide, illuminated by thousands of LED lights, which change color with the liturgical season. A little way down from the hilltop, another, identical cross lies face down on the ground next to its support system. “That one didn’t work,” I hear someone explain. From the outside, it looks like a fully functional piece. Like the other cross, it would have been a spiritual symbol visible for miles around—if it weren’t for some serious flaw.

From Pine Hill’s summit, the town of Waterbury looks like another small diorama. There is St. Anne’s, the Neo-Gothic church where the shuttle picked us up, and there is the interstate.  On December 22 of last year, the road overlooking I-84 was closed, and thousands of people gathered on the bridge to watch as the cross was lit for the first time in decades. 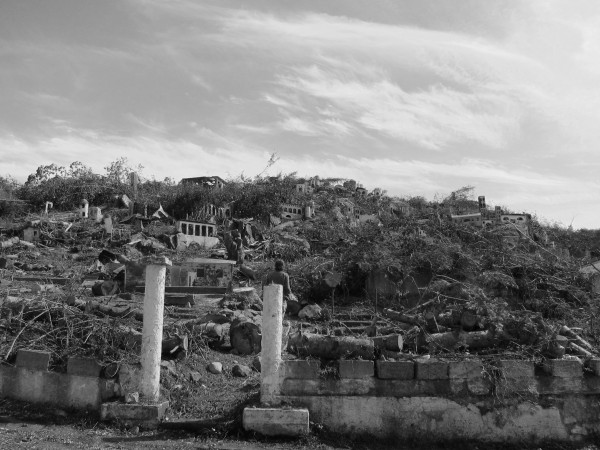 “I’ll be honest, that cross lit at night says it all for me,” Pagano said, recalling a recent flight back to Connecticut. “I’m looking down at Connecticut when we’re starting to come down. The first thing I recognize, I see that brand new cross lit…you know where you’re at from twelve thousand feet up.”

As we make our way to the park’s chapel, we stop in front of the “HOLY LAND U.S.A.” sign, white letters with blue edges, outlined with drooping Christmas lights. Comparisons to the Hollywood sign are both unfair and unavoidable. At the foot of the sign, concrete garden edging spells out “HONOR GOD,” forming a trinity with the sign and cross in the background.

The Mass begins at 3:30 p.m., and the small chapel is packed with hundreds of people. It is a long white room with a low ceiling, wooden pews, and stained glass awning windows—all of them with the same design: a crown and cross. There are parents with children and elderly couples, community leaders and students from the rival Catholic high schools. A sort of Christian pop-punk music plays as we walk in. Then the Mass begins: prayers, songs, a homily, and Communion. Holy Land, the priest explains, is a testament to the power of community. After the service, Mayor O’Leary gives a speech, thanking the hundreds of Waterbury residents who have supported this project.

It wasn’t that surprising to me that a cross glows in the hills overlooking a Connecticut town, or that there’s a Christian theme park with a sign modeled after Hollywood’s. That just seems like one natural development of religious observance in the U.S. What caught me off-guard was how handmade Holy Land is: the carefully lettered signs, the chicken-wire buildings. The decay. Sixty years ago, one man wanted to create something holy, so he built a replica of Bethlehem out of plaster and scrap materials. And when other people saw what Greco was doing, it became sacred to them, too.

After the mass, a group of Catholic high school students ends the festivities by releasing a flock of white doves into the air. Members of the crowd turn their heads to watch before piling back into the buses and heading down the hill.

Libbie Katsev is a sophomore in Davenport College.