One evening last November, I sat next to Anne Fadiman, sipping red wine and enjoying Mory’s famous Baker’s Soup, as Anne told our table of current and former students her famous “car service story.” When she first came to Yale to give a Master’s Tea, she invited a Yale graduate to travel with her in the hour-and-a-half ride back to her home in Whately, Massachusetts, in order to discuss the craft of editing.

Paul Francis ’77, sponsor of the Francis Writer-in-Residence Program, sat at a neighboring table, surrounded by alumni of the writing program that bears his name. Ultimately, it was Francis’s generosity that made the dinner possible, and it was his specific intention of endowing a “pastoral” professor that brought us Anne. So the story goes, when the selection committee learned of Fadiman’s traveling mentorship, they knew immediately that Fadiman would fulfill Francis’s vision.

One afternoon last December, I ascended to the thirtieth floor offices of Delphi Financial, overlooking New York City, to sit down with the two sponsors of Yale’s Writer-in-Residence programs.

Francis happens to be friends with Robert Rosenkranz ’62, sponsor of the Rosenkranz Writer-in-Residence program. The two met many years ago by “total coincidence,” through the board of New York Uuniversity Law School.

Rosenkranz is the CEO of Delphi Financial Group, while Francis has worked in both the private and the public sector, serving as the CFO of Ann Taylor Stores Corporation and Priceline.com, and in high-level administrative positions under New York Governors Eliot Spitzer, David Paterson, and Andrew Cuomo.

Ultimately, he praised a system in which private institutions like Yale and venture philanthropists work together.

“Private funding makes for a more competitive environment, where schools have to compete for funding, faculty, students, and reputation, and that fosters free-market competition, which makes things great here,” he said.

“I just feel such affection for the place,” Rosenkranz said. “It was the first time that I’d succeeded in what I thought was a big pond and it gave me the confidence to think I could do something major with my life.”

In 1990, when Rosenkranz first approached Yale’s then-President Benno Schmidt with a $1 million gift and the intention of establishing something on the scale of a professorship, he wasn’t certain exactly what form he wanted the gift to take. He did know that he wanted his donation to provide something unique and valuable for the university.

“Having thirty-three professors in the economics department instead of thirty-two didn’t seem like it would move the needle very much for Yale,” Rosenkranz said.

Rosenkranz liked Schmidt’s suggestion of endowing Yale’s first writer-in-residence program, since he knew that students got a “certain thrill” from proximity to famous writers. That “thrill” was even more than simply being taught by a great educator.

Francis’s undergraduate experience was marked by the mentorship of Branford Master and writing teacher William Zinsser, the author of the classic guide On Writing Well. Francis noted that his undergraduate study of writing at Yale had been a “tremendous asset” in his career. So in 2003, Francis approached Yale College Dean Richard Brodhead with the intention of endowing a “pastoral” writer-in-residence—someone who would provide advice and guidance to talented students, just as Zinsser had. There would be funds set aside for “Francis Conversations”—readings with prominent writers. Most importantly, the Francis Writer-in-Resident would engage with students beyond the classroom. One way Francis has encouraged this is through reunion dinners with former students, like the dinner I attended last fall at Mory’s.

Rosenkranz had not initially intended to limit his writer-in-residence program to writers of fiction and poetry, and would have been “perfectly happy” to sponsor writers of scientific literature or public policy.

“You don’t necessarily need to write fiction or poetry, but you had better be able to express yourself well in writing,” Rosenkranz said.

Though Rosenkranz did not initially set out to support creative writing at Yale, he and the professors he endows are united by an overarching vision: a dedication to teaching—both inside and outside the classroom.

As Langdon Hammer, chair of the English Department since 2005, said, the philanthropy of Rosenkranz and Francis has enabled the department to hire, “in each case, a really extraordinary writer and woman of letters who happens to be an insanely committed teacher.”

Their commitment to teaching has earned both Fadiman and Gluck repeated extensions of their initial writer-in-residence contracts. In 2012, Fadiman received the Prize for Teaching Excellence by Non-Ladder Faculty. A glance through her class’s reviews by students is enough to validate the decision of the prize committee. One student claims that the six hours of one-on-one meetings with Fadiman were worth the entire Yale tuition.

And, unlike in other classes with specific curricula, Glück enjoys creative autonomy in structuring her courses. “There is no attempt by the donor to supervise or affect the range of teaching that goes on on his dollar,” Glück said. She offers her students this same opportunity for creative self-determination.

“I think that writing is free speech, but I don’t think that my role is to create political writers,” Fadiman said. “My goal is to create freedom, true freedom, giving people the skill and pleasure to use writing for whatever purpose they choose.”

At the same time, the writer-in-residence program gives the professors, like Fadiman, the freedom to practice their own craft. This support allows them, practitioners of art forms that aren’t necessarily lucrative on the free market, a certain stability. Glück feels grateful for the teaching profession that enables her to make a living and create art “without any inducement” of adjusting her work to suit popular taste.

“I’m very grateful for teaching, because I’m not always writing, and when I’m not writing, I can teach,” Glück said. “A lot of America’s greatest poets teach. That’s what they do. Some of them love it, and some of them tolerate it. But in the end, it’s how they make their living.”

And we students feel lucky to have the opportunity to work with our literary role models.

“This random guy, giving all this money, provided me with serendipitous opportunities to sit down with Louise Glück. It’s sort of unreal,” Marshall said. “I have benefited so much, and I know that.”

I share Marshall’s gratitude. Though the idea of “businessmen meddling in academia” may sound troubling in the abstract, the relationship between these donors and the writer-in-residence programs is highly successful. These “venture philanthropists” are motivated by loyalty to Yale, and trust Yale’s faculty to execute their vision. As a graduate of “Writing about Oneself,” I have personally benefited from the intellectual atmosphere cultivated by their financial generosity.

Grace Hirshorn is a senior in Ezra Stiles College. 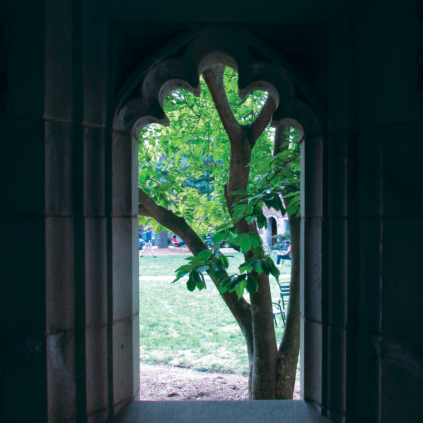