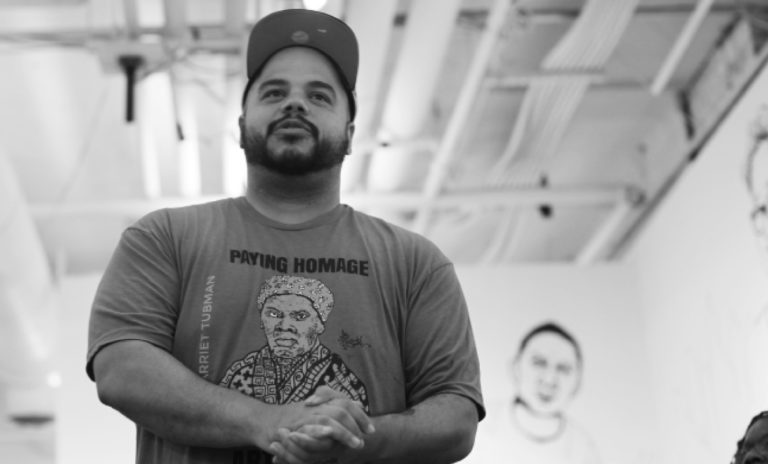 The Lessons of Roberto Lugo

Spectators in the luminous gallery room of Artspace press up against one another, wary of bumping into the artwork on display. Detailed portraits, written messages, penciled outlines, and colorful decals cover the walls. Music commences, and the attendees part, making way for 15-year-old Jordan Walker. He struts in time with a pulsating house beat. When he reaches the other side of the room, a grand-finale backbend provokes wild applause. The music ends, and Walker poses in front of his portrait: Olympic gymnast Simone Biles, her fist raised and brow furrowed. A man in a wide-brim baseball cap takes Walker under his arm and exclaims, “I taught him everything he knows!”

“I really am a shy person, until you get to know me and that really takes a long time, but I thought, what the heck, I might as well do a dance,” Walker said later. “I was able to break out of my shell.”
Walker was one of nineteen student performers in Paying Homage: Soil and Site, the show that concluded Artspace New Haven’s 2018 Summer Apprenticeship Program (SAP). Housed on Orange Street just south of the New Haven Green, Artspace focuses on providing a platform for contemporary artists to create art and connect with wider audiences. SAP, started in 2001, brings New Haven high school students under the instruction of a master artist each year.

The man embracing Walker was ceramicist Roberto Lugo, this year’s artist-in-residence. For three weeks this summer, students from Greater New Haven worked with Lugo to honor their communities and the figures that have shaped them. At Lugo’s urging, for the first time, the program invited students from abroad to work alongside students from Connecticut: two teenage visitors from Riobamba, Ecuador.

Lugo, who is of Puerto Rican descent and calls himself “the ghetto potter,” found ceramics inadvertently. Growing up in Kensington, a Philadelphia neighborhood, Lugo says his education was substandard. After graduating from high school, he was caught in a cycle of dead-end jobs. At 25, Lugo enrolled in ceramics classes at a community college, seeking change and companionship.

“[In] my culture, mostly having blue collar types of employment…you figure out how to make things with machines,” Lugo said. “[Ceramics] seemed like the most natural way for me to work.”

Today, much of Lugo’s work is Victorian-inspired porcelain-ware, ranging from urns to tea sets. The artist pointed to porcelain as a symbol of class division; the material has historically been reserved for the elite. But his pieces typically portray hip-hop artists like Kendrick Lamar, civil rights leaders like Lillie Mae Carroll Jackson, and victims of gun violence like Freddie Gray. By painting historically marginalized icons onto the pottery, Lugo says he reclaims the material. Recently, he’s been returning home to Kensington with a generator and pottery wheel. By crafting ceramics in the streets, Lugo hopes to invite pedestrians to experiment with the sometimes-alienating art form.

In their own work, the summer students honored a wide range of figures––from nationally recognized icons to their own relatives. Adara Huq chose to honor prominent Black trans activist Marsha P. Johnson, a leader in the 1969 Stonewall uprising. In the portrait, Johnson poses in front of collage of bright colors and wears a shirt patterned with the outlines of protesters holding up signs reading “Stonewall means fight back.”

“The movement has been white-washed a lot,” Huq said. “Not a lot of people know or realize that a Black trans woman was the lead of it.”

India Wolterstorff’s piece paid tribute to Estelle Griswold, who gained notoriety for the Griswold v. Connecticut case brought before The Supreme Court, which set the stage for reproductive rights by legalizing contraception for married couples in Connecticut. Griswold was the former head of Planned Parenthood’s New Haven branch, where Wolterstorff herself teaches other teens about sexual health.
“It was really important to me to do someone who is local to New Haven,” Wolterstorff said.

But none was so lucky as apprentice Jaida Stancil, whose subject came to the opening celebration. Stancil honored her grandmother, a construction worker in Connecticut, for her strength in choosing a field that employs few Black women.

Helen Kauder, director of Artspace, said the program directors have begun to opt for emerging artists rather than veterans as instructors; the first summer of SAP, renowned conceptual artist Sol Lewitt, 73-years-old and at the peak of his artistic career, led the program. They’ve also focused on recruiting artists who resemble the majority-Black and Latinx students at SAP.

“What I found really refreshing working with these students was that we were able to find intersections and support one another. It created this space where we understood each others’ plight and we could celebrate in one another’s differences,” Lugo reflected after his own performance.

“I’m sort of a perfectionist, and Roberto helped me let go a little bit because clay doesn’t always turn out how you first want it to when it gets fired,” Wolterstorff said.

Resourcefulness oftentimes doesn’t lead to perfection; in these cases, messy is most beautiful. A Wexler Gallery video from 2016 captures Lugo in an abandoned lot near his childhood home, spinning clay from the detritus that he finds in the neglected urban space. In the video, Lugo intently constructs his potter’s wheel from what seems to be a spoke, hubcap, rope, and an empty tin can. He sifts dirt from the lot, and pours a discarded 40-ounce beer over the unmolded mass, forging clay. Slapping his wet clay pot onto a graffiti-covered cement wall, Roberto can be heard reciting a poem: “I got my two hands up, one is up to ask a question, and the other is up ‘cause I have the answer –– to prove to you, I can make something beautiful out of dirt. I am ghetto. I am resourceful. I am brown.”

The commercial art world doesn’t always encourage messiness. Critics prefer stark white walls to the urban lot. Messy is the antithesis of Josef Albers: it’s the borders of the students’ murals crafted from scrap clay into intricate design. It’s the scene of nineteen teenagers frantically installing their work the day before the opening, doodling on empty space of the gallery walls. To Lugo and his students, it’s a source of pride.