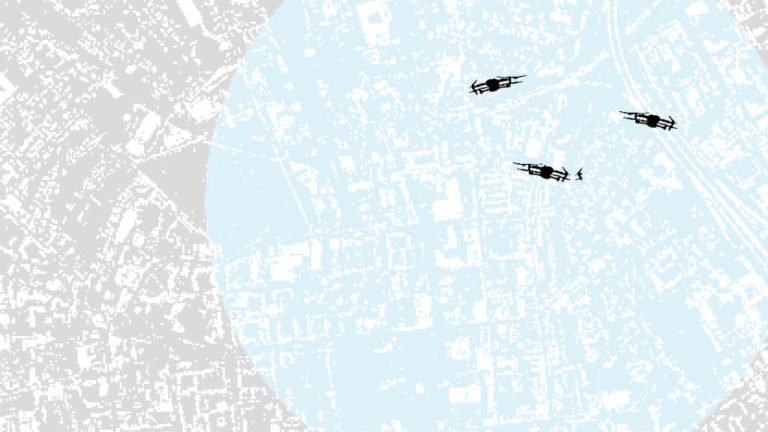 Cloudy with a Chance of Chocolate

On a Friday in October, I wandered into a parking lot on Crown Street, the roofs of the High Street fraternities peeking over the trees. I hoped I had found the drop point for Kiki Air. The day was sunny and cool.  Overhead, I heard a buzzing noise. Cat and Josh pointed up. On the phone, a pilot asked me if I was “in a position to receive the drop.” I said I was, and a blue cylinder fell from about sixty-five feet in the air, bouncing against a curb about twenty-five feet away from me. I tore open the padded cerulean envelope. My Toblerone bar had arrived; the drone flew away, arching over a line of buildings until it vanished from view.

Yale undergraduates Jason Lu, Josh Ip, and Cat Orman hope this might be the future—lightweight snacks and sundries delivered by drone. That vision is driving Kiki Air, a drone delivery app for Yale students, developed by Lu and Ip. As Ip sees it, the coming years will almost inevitably include drones at our beck-and-call.

Food delivery services like UberEats already exist in New Haven, and as Ip mentioned, the market for drone delivery is quickly becoming crowded. In 2016, Amazon announced “Prime Air,” a drone delivery service whose rollout has been continually delayed; Google, UPS and Walmart all have similar services in the works. But Ip clarified that Kiki Air is not competing in the meal-delivery or the package-delivery market, which are Amazon and Google’s terrain. Kiki Air’s small drone can only carry loads up to six-hundred grams. Rather, Kiki Air competes with delivery services like GoPuff, a self-described “convenience store delivery app and digital convenience retailer” available in dozens of U.S. cities, including New Haven, as of May. While Kiki Air’s prices are similar to GoPuff’s,
its delivery time averages about five to six minutes, versus GoPuff’s half hour.  Kiki Air currently has no minimum price for an order, and no delivery fee.

As Ip explained to me, each morning from Wednesday to Sunday, a student pilot picks up the drone from “where it lives,” in an apartment near Whitney Avenue. The pilot fills two suitcases with the day’s inventory—mostly snacks like candy or protein bars, but also other convenience store items like condoms, menstrual products, phone chargers, and toothpaste. The pilot sets up on the roof of a parking garage near the Grove Street Indian restaurant Sitar and prepares for any calls that come in, starting at 12 p.m. Nearby, another certified pilot goes to a ninth-floor office space that Kiki Air has rented, which the company calls air traffic control. The controller can see the drone from the ninth-floor window, complying with the “visual line of sight” required by FAA (Federal Aviation Administration) regulations. That controller also reports on weather conditions and generally monitors the airspace to watch out for airplanes and other flying objects. At dusk, generally around 6 p.m., the controller and the pilot pack up, having concluded operations for the day.

FAA regulations generally do not allow drones to fly within five miles of an airport, but Kiki Air applied for and received a waiver from the FAA to conduct its operations near Tweed New Haven Airport. In transit, the drone flies a few hundred feet above the ground. When it reaches the drop site, it descends to about six stories off the ground, then releases the order on the pilot’s command.  Orman and Ip assured me that the mechanism for dropping packages is safe: packages are swathed in bubble wrap and cannot fall while the drone is moving. If the drone takes a sudden dip in altitude, a parachute releases to slow the machine’s fall.

Ip developed the Kiki Air app this past summer, and in the fall, he recruited Orman to work on marketing and publicity. Lu secured initial funding from an angel investor he met while interning at a venture capital firm. That investment covers the cost of the drone, training, certification, inventory, and wages for three to four FAA-certified drone pilots.

Emerging drone technology is governed by just eleven pages of FAA regulations. The pilots at Kiki Air, mostly first-years in the Air Force Reserve Officer Training Corps program at Yale, have to train and take licensure exams at Tweed New Haven airport, per the FAA’s guidelines for remote-controlled drones. Ip remarked that certifying to be a drone pilot is “like going to the DMV.”

Quinten Hoagland and Bryan Regan, two Kiki Air pilots who are first-year students at Yale, wrote over email that they took the job because of their interest in aviation. Hoagland remarked that the material covered by the FAA exam is largely tangential to the actual job of a Kiki Air pilot. Hoagland noted, “Aside from the ‘flying a drone’ part, the job’s very much like bagging groceries, except the bags are thick bubble wrap tightly secured around the items.” Orders typically begin coming in around 3 p.m. and continue until dusk. Kiki Air receives about twenty-five orders each day.

I was caught off guard by how Ip and the pilots brought the language of daily chores—going to the DMV, bagging groceries—to the hyper-futuristic experience of drone snack delivery. I wondered, briefly, if they had calibrated this language to ease the alarm in my mind, my suspicion of the unfamiliar. But their language was too casual, too off-the-cuff. Rather, it seems that the founders and employees of Kiki Air are entirely at ease with the robotic future that faces us.

Still, Hoagland remarks that he took the job with Kiki Air in part because piloting drones sounded “slightly bizarre.” As Kiki Air’s early success demonstrates, drone delivery may be commercially viable, but it retains a certain novelty. There is a chance that drones will fill the sky someday, and airdropped packages of chips and candy will be de rigeur for all-nighters. Indeed, Ip, Lu, and Orman are betting on it.

—Sohum Pal is a senior in Branford College.