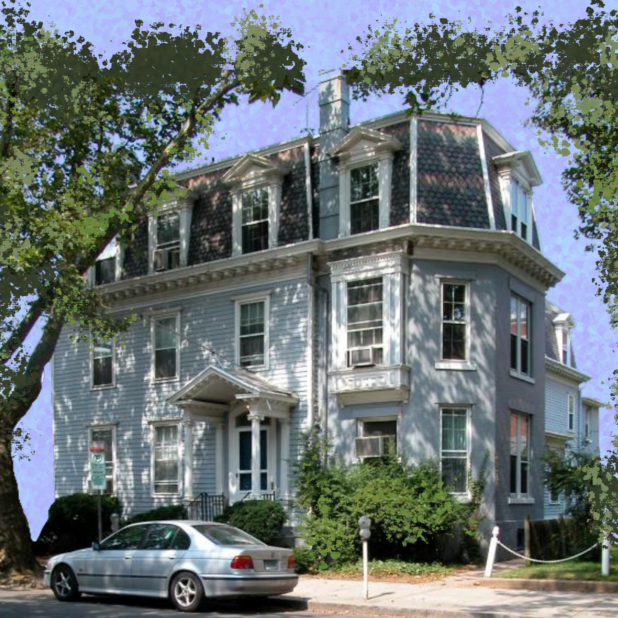 Late one night, we walked across the uneven floors of the building at 320 Temple Street, past hissing radiators and up a creaky, carpeted staircase. My friends and I were desperate to find a last-minute music practice space. The rooms­­—harshly lit, with paint peeling from the walls and carpet fraying at the edges—contained shiny Steinways and sleek black music stands. As we filled the long, exhausted halls with the music of composers living and dead, I found myself thinking about the tattered building’s past—possibly glorious, possibly unremarkable, before time wore it down.

The house that sits at 320 Temple Street, between Silliman College and the Slifka Center, may have a baby blue exterior, but it’s far from its infancy. The building has stood here for two hundred years, always in use, with an identity spanning everything from private residence to alumni meetinghouse. Yale has owned the building for a century. But since March 2020, it has stood there unoccupied, its facade eroding and its future uncertain.

“There was bright blue paint coming off the walls, a really decrepit staircase and shitty carpet in the Blue House,” said Charles Comiter, who graduated from Yale College in 2020 and worked as a monitor in the building in the 2019-20 academic year, the most recent year Yale School of Music actively used the building. Comiter said he thought of the building as a house steeped in 1800s wealth that, over the years, has aged into an “old and decrepit random building” known to fewer and fewer people. After all, most of the emails I sent—to dozens of students, staff, and other members of the Yale community—were met with variations of  “We have no recollection of using this building” or “I wish I had information, but I don’t.”

Cellist Francis Fedora ’24 described the building similarly: “It’s a little spooky, especially late at night…and also the creaks.” He imagined that the building may have had a past as an orphanage, and he spoke with fondness of late-night practice sessions in the building. His slow intonation work, focused performance practice, and messy sight-reading all felt delirious to him, surreal memories that revitalized hollow rooms with the sounds of midnight music and laughter.

Comiter and Fedora both imagined the building’s pasts in ways that were only partially correct but wholly constructed from memories and archetypes. The tale of a storied building can never be much more than interweaving lines of blurred memory, faded photographs, and yellowed documents.

According to one such document, a listing in the New Haven Preservation Trust, the building was built in 1806 and became a patchwork quilt of Federal style and French Empire architectures. A combination of Yale Library archives, old issues of the Yale Alumni Magazine, and books published by the University Press reveal additional information: The building’s first known resident was Rev. Jedidiah Morse, an American Congregational minister often known as the father of geography and the father of Samuel Morse, of Morse Code and Morse College fame, who lived there as a child. The building underwent its first renovation in the eighteen-sixties, then cycled through three owners and one more remodeling until Yale University purchased it in the early nineteen-twenties. In the decades that followed, it served as a dorm for Yale freshmen, then for women graduate students. It was the Yale Alumni House from 1958-1975, and subsequently housed the Department of Religious Studies until 2001, at which point its ownership shifted to the School of Music. For the past twenty years, the building has been a liminal space for the music school community, functioning as an extra practice, instruction, and social space when other buildings were being renovated or under construction.

Another tattered document, a floor plan from the mid-20th century stored in Yale’s Manuscripts and Archives, shows that a first-floor room facing Temple Street was once Rev. Morse’s kitchen, but became one of the few rooms at the School of Music with more than one grand piano, for students to practice duets and concerti. Bedrooms turned into practice rooms—spaces that, according to Comiter, were often frequented by graduate students during the day and undergraduates at night. The old porcelain bathtubs were covered with wooden planks and locked shut. Somehow, through the decades of ringing and banging—from clashing cymbals, clinking piano keys, and whooshing clarinets—the house retained its shape as a house.

Now, according to J. Lloyd Suttle, Yale’s vice provost for academic resources, the Provost’s Office is in discussions with Robert Blocker, Dean of the Yale School of Music, about the future of 320 Temple.

According to Stefanie Parkyn, the Chief of Staff of the School of Music, the music school has “vacated the building” as of this year and is not actively using it. But Suttle said that “no decisions have been made about the future use of 320 Temple,” if and when the building is officially unassigned from the School of Music. Yale could essentially do anything it wants to the building in terms of physical modifications, said Alex Eginton, director of the New Haven Preservation Trust.

Fedora spoke about the long hallway on the building’s first floor, a hallway that extends past what was once, according to University floor plans from the nineteen-seventies, a “RESIDENCE SUITE” and “BED ROOM” for the house’s “MANAGEMENT COUPLE,” a staircase, two bedrooms, and three porches. In its seeming endlessness the hallway is evocative of the building’s long past and obscure future.

“I never went down the bottom hallway,” Fedora said. “It scared me for some reason. It was just so … long.”

I’ve never ventured all the way down, either, and I don’t know if I’ll ever get that chance. For now, the building will continue to occupy the same plot of land it has claimed for two centuries. Its floorboards will keep creaking, the paint on its walls will keep peeling, flake by flake, and its pianos will remain in purgatory.

Phoebe Liu is a senior in Trumbull College.