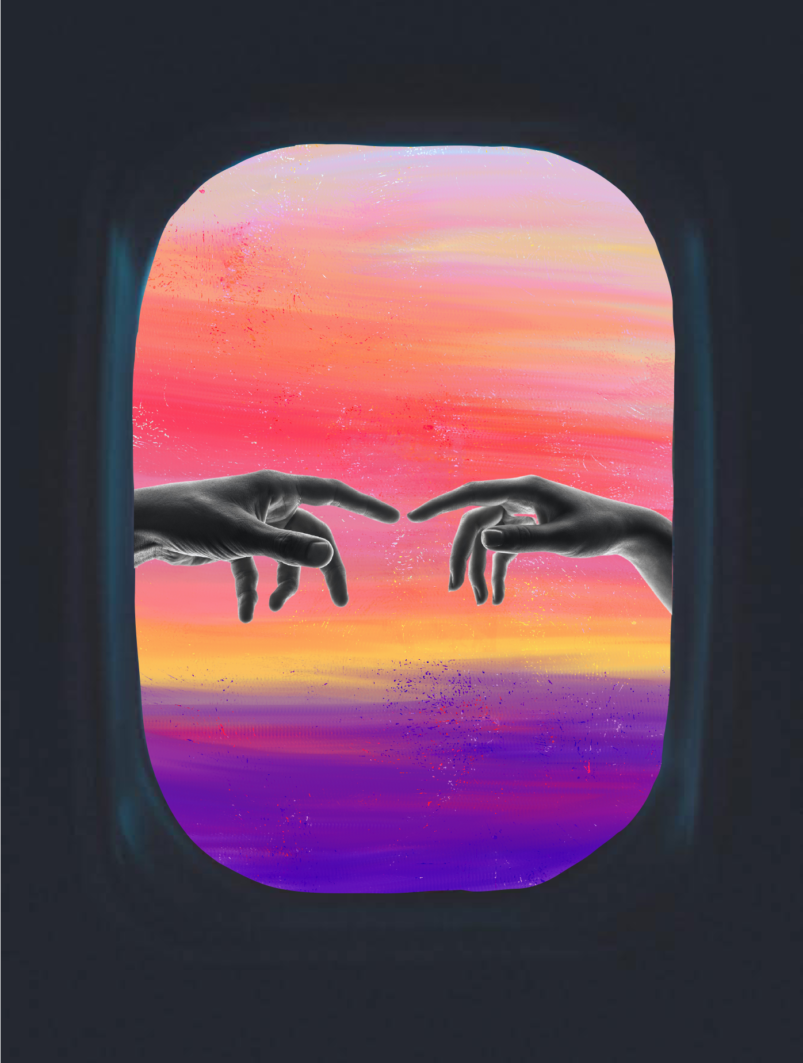 I missed three trains. In the underground network of Penn Station, I befriended a man from the Virgin Islands as we both failed to find the same platform. We were in matching black coats, and the two of us each assumed the other was a native New Yorker. He asked me for directions one floor below the voided track, where the thick train air settled and shoved warmth through our coats. I could not hear him; humidity muffled his voice. Together we sat on the second C train uptown, after the first left without us, and rode the fifty minutes to Queens from Midtown Manhattan. He rode one stop further than I, and we waved as I left the emptied train before him.

My flight from New York to Salt Lake City departed and passed without disruption. I seemed to close my eyes and wake up above the glowing grid that was Utah. On the ground I saw my father again—I hadn’t seen him since Thanksgiving. He only knows how to communicate through email, and I’m not fantastic at checking mine. He flew from Los Angeles, which we’ve both called home our whole lives. Salt Lake City was not our destination. It was a pit-stop on the way to visiting my mother’s side of the family for the holidays. They live in Bigfork, Montana—in the razed northwestern glacial floodplains of the Flathead Valley, just a couple hours south of the Canadian border.

On the flight with him, I fell in and out of sleep. Our plane was delayed two hours because of a snowstorm in the valley; he shook me awake before we landed and ordered me to tighten my seatbelt. The slight fear in his voice rose and fell and, above his mask, the light of his computer shone in his reading glasses. He remarked that landings on snowy runways are rough. Be prepared, he said.

It was about 1:30 a.m when the pilot gurgled something over the loudspeaker. The seatbelt sign was on, and with the adjacent “wifi” and “no smoking” icons, the roof of the plane was patterned in red, white, and blue light trios. My dad returned to his crossword, switched seats with me so I could watch the snowfall out the window. He’s touching retirement now.

Here, flying above the distant, agricultural regions of the Rockies, sodium vapor gas bulbs lit sparse barns down below. In the summer, farmers sow the fields with canola seeds and harvest the flowers to make oil. The ochre halos dimmed under the night-grayed blanket of snow. With each rush of wind on the plane, my anxiety seized and convinced me that this was the end. Soon, it said, we will join the rusted lights in the snow. Soon, there will be the most fantastic crash on that rural runway platform.

We landed safely. I reminded myself that I’m older now. That fear felt childlike. Sleepless passengers trudged past the relic construction machines shut down for the storm. The orange light glowed on the excavator’s teeth, and my dad wondered what they’re building. We passed through the three-gate airport—my mom waited for us on the other side—she flew out before us to see her parents. It was then two in the morning, and she ran to me before I could see her through the condensed exhaust clouds from the car. The gas burned in my nose.

She left the doors open, as she always does, and music swelled from the dashboard speakers. Her arms spread around me. I remembered I hadn’t been good about answering her calls. It was the end of my first semester in college, the longest I’d ever been away.

I see her image now, still, singing and jumping—she looks at me and belts Neil Diamond’s “Girl, You’ll Be a Woman Soon.” Her voice buzzes contralto. The car feels warm inside. The song plays. It ends:

“Girl, you’ll be a woman soon

Cleo Maloney is a first-year in Silliman College.