Sometimes people fly. Sometimes they yell. Sometimes they fight, with their feet and their fists, pounding faces. Their eyes are enormous—some opened wide and round like cherries, others pointier, almond shaped. There are monsters sometimes: space creatures or enormous spiders that bleed maroon juices and snarl. Sometimes there are magical elks and strange horsefaced dogs. There’s multicolored shade and stripes of lamplight on dark streets. Sometimes there are swords and sometimes there’s sex. There are subtitles, in English. If there weren’t, you couldn’t catch a word. We’re watching imported cartoons, shipped through the television waves from Japan. It’s Anime.

Anime, in Japanese, simply means “animation.” For the most part, Anime seems like your average Saturday Morning Cartoon. They’re often based on Manga (Japanese comics), just as the Batman and Spiderman series are based on Marvel Comics. With a little television magic, the pictures move. The sketches come in all shapes and shades. They’re the flat pastels of Care Bears and the primary hues of Loony Tunes.

Yale Anime Society is watching its weekly episode of Cowboy Be Bop in the basement of Branford College. Here at their “viewing circle,” there are ten or so figures in hoodies and polo shirts, cargo pants and skirts. Nobody says hi. Shuffling in at 9:30 pm, I’m late, and they’re already engaged, save for one young man in the back, who is happily brandishing a homemade wooden sword, and his victim, who is playfully punching him back.  Jazz music slips from the speakers, and there’s a rocky spacescape on the screen.

The Anime Society’s oldest member, a graduate student named Josh, explains the show to me in whispers from his spot on a black leather couch. Somebody tells us to be quiet, but Josh responds that he’s “pulling rank” as a Viewing Circle veteran and keeps talking. Cowboy Be Bop, he explains, a “genre skipping space western.” Each episode of action packed fighter jets and busty romance is set to a different musical theme. Tonight there are trombones and saxophones making the space cowboys’ shuttleships dance.

The Anime Society is an accomplished bunch—they are political junkies, students of literature, philosophers and musicians—but tonight they’re letting their eyes turn blue from the screen, letting their serious daytime world morph into something utterly fantastical. You can see the reflection of the cartoon in a few pairs of glasses. Fernando, a senior member, molds his body into the couch as the spaceship lands, and Josh’s body is tense in observation, muscles rubberband taut as he watches a man hop out of the ship and onto the bumpy gray surface of some distant planet. Alex, a sophomore, has her computer on her lap, as if she could manage homework and viewing simultaneously, but she’s rapt at the screen. In this moment, nobody’s a student any longer  – they’re all bystanders to a drama that cannot be missed. By now, they’re all standing on spacerock themselves, and they all fall silent.

The Anime man is wearing a red coat. He is our hero. He rushes towards another young man, who is lying flat on the crater-land, gasping, big eyes pulled flat into thin, tired lines. Our hero looks on, kneeling, worried. In the back of the Branford television room, the boy with his sword has stopped trying to hit his friend. A couple to my left moves closer, links arms.

But back on the screen, the man lying prone is now just barely talking, exhausted from battle. It had been a spacerocket fight, with yellow explosions and grey smoke, loud snaps and swishes and bangs. His spacecraft damaged, he was forced to attempt a crash landing but botched it. He’s hurt.

In his last moments, he tells the red-coated hero about Julia, someone they both know and miss, and both maybe love, too.

“Where is she now?” our hero asks. The dying man does not respond, but he speaks in whispers of the woman. He remembers her from bygone days, there, in the corner seat of the bar. “She always sat there….she always requested the same song, and smiled, sadly… smiled.” It’s a cliffhanger. The men’s faces fade.

As the jazz slows, we see a campfire back on planet earth, we’re quickly shuttled back to reality with the glaring stereotype: there’s an American Indian chief crosslegged in wild regalia, headdress and all, talking to a little boy. They see a shooting star.

“That is no ordinary star,” the cheiftan says, ponderous. “It is the tear of a warrior. He who has finished his battle somewhere on the planet.”

The scene pans out with the campfire smoke, to the sky over rockcliffs, then the sunset, and the jazz gets lonelier, and the credits roll.

Next Episode On Cowboy Be Bop, the screen in Branford flashes. Cryptic subtitles to prepare us for the installment to come:

DO YOU HAVE A COMRADE? In life, darkness looms one inch away from you. This world is truly full of mistakes…….now, won’t you waste your life away with us?

Kate Selker is a Junior in Davenport College. She is a Managing Editor of TNJ. 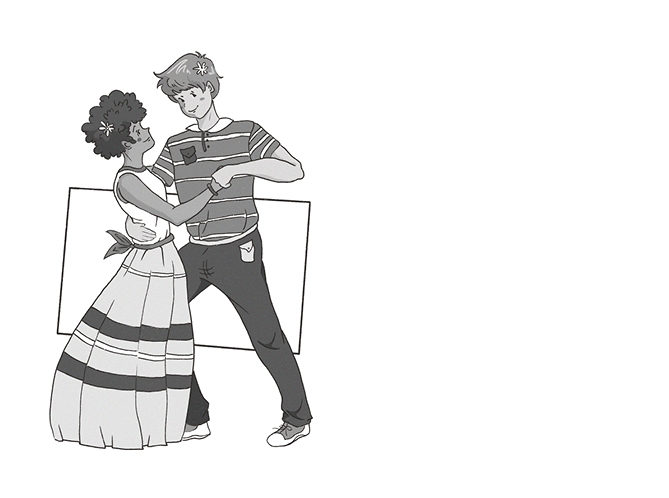 In Step With Tradition