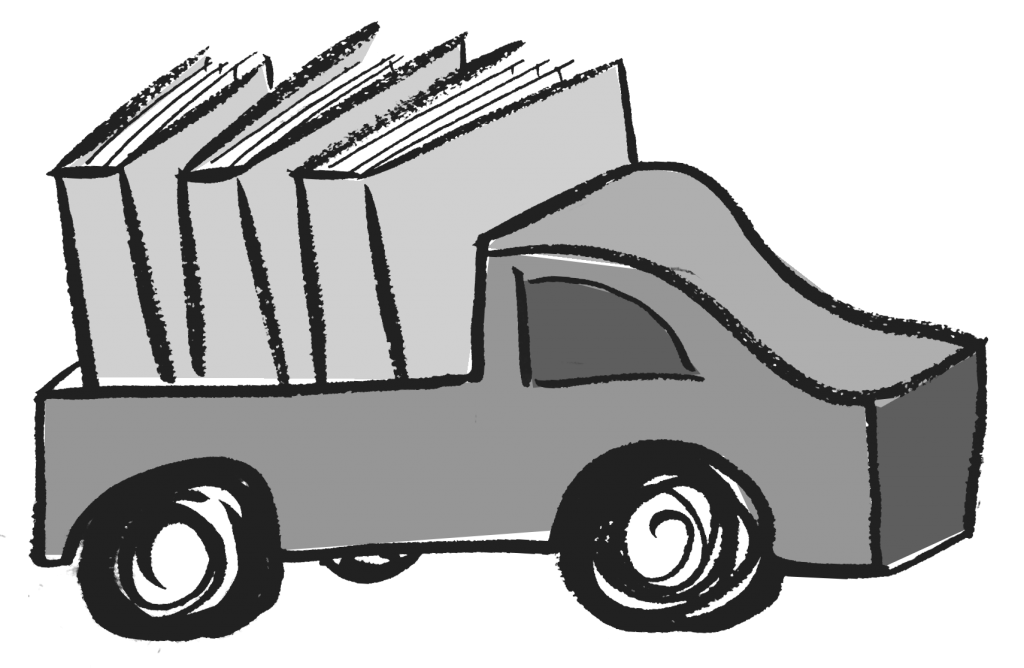 The bright orange paint on the New Haven bookmobile makes it look like a freewheeling bus of the nineteen-sixties. But if you walk inside, you will find that the carpeted interior resembles a preschool classroom. Wooden shelves jut out of three sides of the bus, filled with books of all shapes and sizes. Some are books for young children, like Angelina’s Big City Ballet and A Mare for Young Wolf; others are elementary school favorites, like The Lion, the Witch and the Wardrobe. Every year, the bookmobile visits over one hundred sites around New Haven, and almost every month it makes a two-hour stop at the Blake Street Early Learning Center in Westville.

Children from low-income families have limited access to books. The bookmobile is trying to tackle this problem in a decidedly non-digital way, by bringing the physical book back. In New Haven, where thirty-five percent of kids live in poverty, the stakes are high: research shows that kids from underprivileged households who cannot read proficiently by third grade are six times likelier to drop out of high school than their peers. The New Haven Free Public Library has operated the bookmobile for fourteen years under the assumption that wheels could be part of the solution. Last year, the original bus was retired due to maintenance issues, and the new bus got a head-turning orange paint job. The lettering on one side now reads, “expanding minds, unleashing potential” and “expandiendo mentes, desatando potencial.”

Last year, the original bus was retired due to maintenance issues, and the new bus got a head-turning orange paint job. The lettering on one side now reads, “expanding minds, unleashing potential” and “expandiendo mentes, desatando potencial.”

Vehicles like the bookmobile have a long history in the United States, dating back to 1905, when a librarian in rural Maryland began carting books around in a wagon to reach people who lived far from the library. At their peak in the mid-twentieth century, roughly two thousand bookmobiles trundled down American streets; as of 2011, there were just under seven hundred library bookmobiles left. Increasingly a relic of a bygone age, New Haven’s bookmobile is playing a tiny part in America’s long battle for educational equality.

In the morning, the first class of ten children filed onto the bookmobile from the Blake Street center, with two teachers in tow. They chattered noisily as their teachers ushered them onto the small benches lining the floor.

“Who’s been to the library before?” asks Natasha Mickelson, who runs the bus’s programs for young children. She sits upright in a chair near the front of the bus, smiling at the seated children. The teachers are tasked with keeping the children quiet and attentive while Mickelson’s voice remains calm and level, commanding the attention and even awe of the kids.

Every child on the bus raised his or her hand in response to the question.

At their peak in the mid-twentieth century, roughly two thousand bookmobiles trundled down American streets; as of 2011, there were just under seven hundred library bookmobiles left. Increasingly a relic of a bygone age, New Haven’s bookmobile is playing a tiny part in America’s long battle for educational equality.

“What do you do at the library?” Mickelson’s voice contained an energy that permeated the room.

A little boy named Caden nearly jumped out of his seat: “Yes, we do!”

Mickelson opened up a picture book that had been sitting on her lap, holding it so the children could see the pictures inside. She must have read the book a hundred times before, but she acted as if she were reading it for the first time, like the children. The book, called Wild About Books, tells the story of a bookmobile for animals—an approach that is heavy-handed in its self-promotion, but is also effective in capturing the attention of the kids, who connect the story to the bus they’re sitting on. “By reading aloud from the good Dr. Seuss, she quickly attracted a mink and a moose. A wombat, an onyx, a lemur, a lynx, eight elephant calves and a family of skunks,” she read. The children’s teachers occasionally had to redirect their attention to the story, because they were distracted by all the books waiting behind them, trying to decipher the titles or pull them out of the shelves to inspect the pictures inside. Sometimes, the kids got carried away in their excitement as they responded to one of Mickelson’s supplementary questions (“how tall is an elephant?”), chattering on over the exact height of an elephant.

When story time ended, the session finished with a chorus of “Twinkle, Twinkle, Little Star.” Afterward, the children shuffled to the door. Someone asked eagerly, “Are we going to the playground?” As the last girl reached the stairs, she turned to face Mickelson and waved. “Thank you!” she called.

When almost any form of media can be streamed at the push of a button, the sight of children elbowing one another for books is inherently nostalgic.

Throughout the fall and spring, the bookmobile rolls down the streets of New Haven, from East Rock to Newhallville, Westville to Fair Haven. Between October 2014 and October 2015, the bookmobile had 4,350 program attendees, 2,774 books checked out, 112 site visits, and 180 new library cards issued at schools all across New Haven, but especially at early learning centers like Blake Street. According to Xia Feng, who administers the New Haven Library’s Young Minds Program, most early learning centers lack the library spaces for older kids that exist in public schools, and there are only five community libraries across the city. The bookmobile tries to fill that gap.

Focusing on early learning centers, however, constrains the bookmobile’s reach: just under half of New Haven’s 8,500 children under the age of four are enrolled in early learning programs. The bookmobile also visits summer camps, block parties, and the annual tree lighting on the New Haven Green, but this doesn’t leave the time or resources for general neighborhood visits, which might allow people to stumble serendipitously upon the bookmobile. According to Catherine DeNigris, the New Haven Free Public Library’s deputy director, other challenges include the weather, which keeps the bookmobile from going out during January and February. “Ideally we would want the bookmobile on the road more,” she said.

When almost any form of media can be streamed at the push of a button, the sight of children elbowing one another for books is inherently nostalgic. But Mickelson believes that libraries are still relevant, especially in areas where young children don’t have easy access to books at home. Story time, DeNegris said, is “a tradition that has been around forever but is still totally viable,” since it creates a gathering place and social experience for children. Though the bookmobile may not have the same reach or accessibility as broader digital initiatives, it has something those projects don’t: a physical space and a tactile reading experience that together make a lasting emotional impact on kids.

At the end of the second session at Blake Street, the children were asked to pretend they were holding books of their own. “What do you see in your book?” Mickelson asked.

“I see mushrooms!” “I see geese!” Almost every child stared into their hands as if they were really holding a book. I caught the eye of one little girl; she smiled, briefly, then turned back to the story she was developing in her palms.