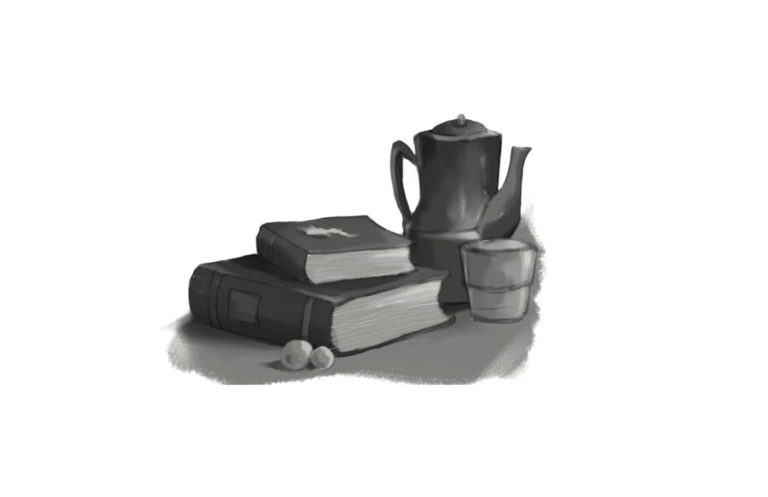 New Books on the Block

The pre-recorded sound of a harpsichord plucking along to a Baroque string ensemble mingles with the smell of old pages and wooden bookshelves. Lingering near the front door of Grey Matter Books, I watch as mid-afternoon light re ects off cars lining York Street and illuminates piles of secondhand books and 1930s Travel magazines that cover the surface of the broad windowsill. A middle-aged man wearing a green button-down shirt, store owner Sam Burton squints at a book through a pair of thin glasses pushed to the end of his nose. He greets me with an amused smile but glances back at the books at his side, explaining that he’s in the middle of making a purchase. While I wait, I wander over to the arts section and pick up a collection of Swedish artist Ulrica Hydman Vallien’s paintings: humans rendered in bold strokes and bright colors, concealed within a jet- black jacket cover.

Grey Matter Books opened the doors of its New Haven store in late February of this year. You might have to squint before you notice the small sign in the front window, which features a black-and-white image of a brain growing from a stem, enclosed by a thin circle.

The bookseller asks if Burton could go any higher on his offer for the used books, then reluctantly takes one of the crates back into his arms. Burton turns to sit down across from me at a table buried in more books and faces the sun- lled front window, surveying the busy sidewalk with distracted glances.

Though Burton’s own preferences in literature ranges from philosophy to lm, Burton clari es, “I don’t think the mission, per se, is to inflict my taste on people.” The Grey Matter website’s guide for booksellers features the store’s “No-go’s” list, which states that “the world is choking on its copies of The Girl with The Pearl Earring and The Da Vinci Code,” among others. On the other hand,

“The Always and Near-Always Want List” contains eight categories including “handsome editions of the classics,” “raising chickens; keeping bees,” and “basically anything experimental, or else just plain good.” These criteria have “been whittled down through years of buying and selling,” Burton says. He worked at The Strand in New York and at independent bookstores across three states before opening the first Grey Matter in Hadley, Massachusetts, ten years ago. “Throwing away books is a very important thing,” he tells me. “You don’t want the shelves to be stale.”

One round through the store reveals old and new, mainstream and niche occupying the same shelves. Burton’s eye for the eclectic has curated an unusual collection of books that encourages customers to jump into unfamiliar literary territory. In corporate chain bookstores, autopilot steers me straight towards the textbook section, or the “kids” section, or, more realistically, the in-store Starbucks. I often leave with exactly what I came looking for—nothing more, nothing less. Instead, Grey Matter beckons me to take some time and explore sprawling rows of shelves housing unknown genres.

A few days later and a few blocks away, Dave Duda, owner of the Book Trader Cafe, sits with me in the store’s glass atrium. Downtown New Haven was home to five other independent bookstores when he first opened his own twenty-three years ago, but now, of the five, only the Book Trader Cafe and Atticus Bookstore Cafe remain. “The internet basically happened while we’ve been here, so we’ve done a lot of evolving,” he comments. When book sales alone could not sustain the store, Duda expanded food offerings and adjusted prices to “mesh with the times.” Nodding to the used books sprawled across the main counters, he jokes that after the debut of Marie Kondo’s Netflix show Tidying Up, his inventory is fuller than it’s been in a while. Even so, he says that “something is missing” when customers don’t shop at physical bookstores, and he wishes more people explored literature simply for the sake of reading.

“I would not want to try and pay the kind of rent you have to pay just selling books,” Duda says, “but I wish [Burton] well.” Burton is con dent that an interesting selection of “hard-to-find” books, which can’t be found anywhere else in the area, will draw in a steady stream of curious customers, and he hopes to “get into sync with what people need or want” as the store’s collection grows. Still, I can’t help but wonder if Grey Matter’s eccentric selection will be enough to prevent the front room, currently allotted for performances and book group meetings, from becoming a cafe for the sake of survival.

Back in Grey Matter, I approach a customer dressed in a muted tweed suit. Stephen, who is a tourist from Dublin, tells me it’s “absolutely astonishing” that he found a first edition copy of Renata Adler’s Pitch Dark on his first visit here after years of searching for the book in his travels— and for a very low price, too. Yale sophomore and film aficionado Brittany Menjivar shared a similar sense of excitement when she discovered a zine called Bad Seed 1. “It’s the kind of zany, rare item that I’d never nd in a Barnes and Noble, and I can’t wait to check it out,” she notes. “Grey Matter has definitely inspired me to read more this year.” Cameron Brown, a Connecticut native and store employee, has spent four years working in bookstores and agrees that Grey Matter’s selection is what makes it so remarkable. Eagerly reaching up to a shelf behind the cash register, Brown retrieves one of his own favorite finds: The Outsider 4 & 5, a forty-six-page homage to poet Kenneth Patchen featuring delicate pages of pressed flowers and a decorative red knot of curling vines on the cover.

Burton reflects that unlike in Hadley, where his store is surrounded mostly by fields and cows, in New Haven “there’s some quirky people walking the street. It’s been fun.” He sighs and points to the pile of boxes sitting under an archway near the religion section, a sample of the thousands of books he’s had to move over the past few weeks. He admits that running two bookstores, while gratifying, can be labor-intensive. “It’s definitely not for the faint of spine.”

—Lakshmi Amin is a sophomore in Branford College.

Keeping the Lights On