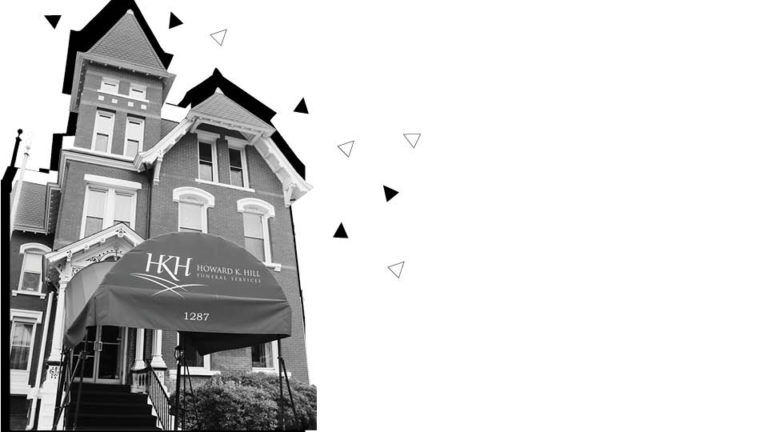 On the wall of Howard K. Hill’s office hangs a framed poster with a quote that begins: “THE FUNERAL helps confirm the reality and finality of death.” But while Hill owns a funeral home, he doesn’t just serve people at burial time. He encourages people “to prepare not just for death, but to prepare for life.”

Howard K. Hill Funeral Services first opened its doors in 2004. Fifteen years and two new branches later, Hill is well-established in the business. “As a funeral director, you have to entrench yourself in community in order to remain relevant,” he told me, settled in a high-backed leather chair. Hill wears elegant suits, has a shiny bald head, and maintains a thin, neat mustache. He talks slowly and evenly, and moves with practiced calm. Glass plaques on a table in his office commend his leadership, and one declares him Humanitarian of the Year.

Hill bought his Chapel Street building—a three-story, nineteenth-century house with a red awning—from Monahan, Cox, Smith, & Crimmins Funeral Home, which has since migrated to Wooster Square. Hill said the business moved “because the population shifted.” According to Hill, his predecessors served mostly Italian and Irish families and left the neighborhood when their clients did. Today, many of Hill’s neighbors are Yale-affiliated renters who don’t bring much business. “Yale clientele are not necessarily dying; they’re not necessarily from here; and they come here very temporarily,” he said.

Most of Hill’s clients are black families who attend church in the surrounding Dwight neighborhood. “They may live out in the suburbs, but they come to church here,” said Hill, who participates in church events. “So when something happens, they know me.” He emphasized that segregation in the funeral business is by no means organic—his difficulty attracting white customers has deep roots in historic prejudice. While white funeral directors have been able to “serve the black community with ease,” Hill has had difficulty expanding his client base. “Do I want to serve in other communities, white communities? Absolutely I do. I’m a business person,” he said.

Hill pointed out Gerry Brown, an older white man and funeral director. Hill hired Brown about ten years ago “for the specific reason” of developing stronger ties to New Haven’s white population. “It was in my original business plan that I want to be the first African American funeral home that routinely serves in white communities,” he said. “It still hasn’t worked.”

Hill sees his limited market as a symptom of the challenges that black-owned businesses encounter. Following legally mandated integration, many black-owned businesses were wiped out by their white-owned counterparts, and these businesses are again in decline, Hill said. In 2014, his concern about this trend prompted him to found the Black Business Alliance, which coordinates networking, training, and technical assistance for black entrepreneurs in New Haven, Hartford, and Fairfield counties.

Early in his career, Hill noticed that many families struggled to cover funeral costs. He integrated financial advice into his funeral consultations, speaking about savings and investments, life insurance, and how to preserve wealth across generations. He often buries multiple family members, so he tries to help people make financial plans from one funeral to the next.

Hill even hired one former client, and later helped her start her own business. After Sandra Watts, the daughter of a woman Hill had buried, lost her job, Hill hired her as the funeral home’s chaplain. It was her job to provide mourners with emotional support. At Hill’s encouragement, she also arranged flowers in the funeral home’s basement. When a local florist wanted to sell their shop to Hill, he signed the lease on Watts’s behalf. Watts had never owned a business before, but she “trusted [Hill] because he was proof that it could be done.” Now, she has a storefront on Shelton Avenue in New Haven, and another space on Dixwell Avenue in Hamden. Her shop is called Remember the Lilies, after her mother, Lily.

Moved by the financial insecurity he witnessed in his customers, Hill started a fund to help cover end-of-life ceremonies. This organization, now called The Prosperity Foundation, evolved to support organizations that serve Connecticut’s black community with services that include college and career preparation, culinary education, and support for people experiencing homelessness.

As he supports other black businesses and organizations, Hill is also expanding his own franchise. In addition to existing locations in Hartford and Bloomfield, he is purchasing another funeral home in New Britain. He wants his branches not only to provide services for the dead but to spur economic prosperity among the living. In Hartford, for example, he is advocating to redevelop the area around his funeral home as a shopping district for the local community. “This is my community change model,” he said. “It’s reserved specifically to impact black communities, starting with an aggressive funeral director.” As Hill models it, this “aggressive funeral director” is someone who is determined to make change—someone who leverages the business of death in order to enhance community life.

—Abby Steckel is a sophomore in Benjamin Franklin College.