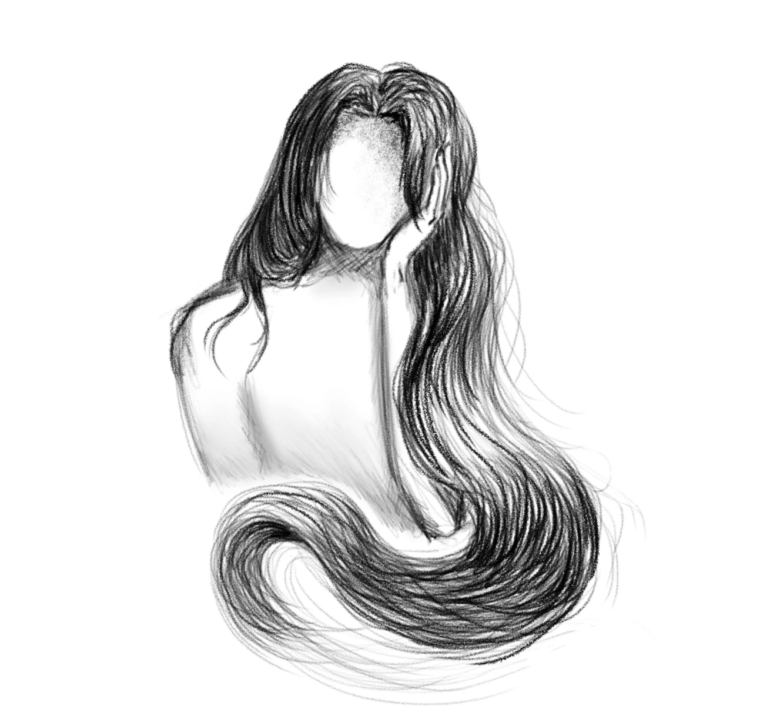 My mother’s frown is brittle. Her hovering is making the hairstylist nervous, I can tell. She offers my mother a coffee in another room. My mother’s eyes track the tiny silver scissors, the sizzling straightener, and the array of thickly-scented styling products. Polite and cool, my mother says, “No, thank you.”

“Mom doesn’t approve, then?” the hairstylist jests, her voice a little high-pitched. But the joke falls flat in the strained silence between us. “Right,” she mutters, shaking her head and grabbing the straightener. She begins to chatter as she splits my hair into sections and scorches each into obedience. I can feel her relax into her routine: her deft, thin fingers pulling and pinching and burning. She talks about her two dogs, the week of pleasant weather we’ve been having, and how much she loves the Shake Shack down the street. I appreciate the effort. She must sense the anxiety building in me, climbing my spine and seizing my shoulders, leaving me wide-eyed and frozen in the mirror. In the reflection, I watch as the hairstylist rifles through a drawer, pushing a pair of scissors aside in favor of picking up a pile of hairbands. It is easier to focus on her actions (quick, loud, sure). It is easier not to look at myself.

When she ties the first hairband, I swallow. Her hands, pale and manicured, lack the warmth of my mother’s. They braid with efficiency and precision, tying the second band an inch from the ends of my hair. “Cutting two feet of hair!” she exclaims. “That’s incredible.”

I nod, and the world narrows down to the chink-squeak-chink of the scissors sawing their way through my braid. I can see my own eyes widen in the mirror. There’s a last bit of resistance, and then—then—

My shortened hair springs free from where the bands have been severed, swishing around my shoulders. My god! It’s so light! A part of me squeals. I feel vaguely dizzy, grinning. My mother is saying something—the hairstylist is passing her my cut braid, now a limp, dead thing, to be wrapped in plastic and donated—but all I can hear is a faint buzzing in my ears.

The hairstylist continues to press and snip and pull. I watch it all in the mirror, the tension leaking out of me, leaving a pleasant, tipsy sensation. When she is finished, I have been born anew. I remove the towel from my shoulders. I cannot stop smiling. Somewhere beside me, my mother is watching intently. Her hands grasp the bag now weighed down with my braid. She is bristling with disapproval.

“Well?” the hairstylist asks. “What do you think?”

And then, before the idea can be clamped down or tempered, I think: I look American, now.

In elementary school, letting my hair down is more of an event than an action. I call it “opening my hair”—the result of learning English from two Pakistani immigrants. My mother forbids me from undoing my braid in class for fear of tangles and catastrophe, but every once in a while, when I feel particularly rebellious, I pull off the hairband and let my curls dangle down to my knees. Some of my classmates stare and giggle. Others do a double-take, unable to recognize me with wavy blackness framing my face. Others still frown or grimace, or ask, out of genuine curiosity, “But why?” and “Will you ever cut it?”

As a child, my answer is always no. My friends make bets on how long my braid will be by my wedding day. I explain to one of my third-grade classmates, with a little too much honesty, “I won’t be pretty without my hair. It’s what people know me for.” In the winters, when I visit Pakistan, my aunts praise my braid. My younger cousins watch with rapt attention as my mother carefully interweaves the locks, coating each section with coconut oil and tenderness.

In Pakistan and India, hair has long been a point of pride for women. My mother and my mother’s mother and my mother’s mother’s mother all carried the same black braid down their backs, the same proud tilt to their shoulders. In ancient Indian sculptures and paintings, the women’s hair is styled in draping loops and piled knots, embellished with jewels and tiaras. In everyday life, scholars believe, coiffures were used to differentiate amongst social classes. In religion, gods were distinguished by their individual hairstyles: Shiva’s jata. Lord Krishna’s curls.

Today, the pressure on women in the Indian subcontinent to keep their hair long is so strong that styles above the shoulders are considered radical. Models are fired for cutting their hair. Bobs are seen as unprofessional. Pixies and buzzcuts are unheard of. Women who choose to wear their hair short do so knowing that they are an exception to the norm: a tiny, rallying rebellion. I think of my mother’s disapproval, of my own elation. I think of all the times my mother told me, you’ll regret it; I think of her running her hands through my hair, helping me cover it in thick, wet mehndi, praising its tint of red in the sun.

I try to convince myself that I am defiant.

By the end of middle school, though, I am tired. The stares—the smiles—the questions—the attention in which I had once basked begins to feel draining. I want to be one of those girls who wears her hair down every day, soft and brushing her shoulders. I have stopped visiting Pakistan. It matters less and less that my family would be disappointed if I returned with my braid chopped off. I spend six months watching “Cutting Off My Long Hair!” videos on YouTube, and another six convincing my mother to let me go through with the cut. I run through my list of reasons: I’m tired of the inconveniences of long hair. I’m entering high school next year. I want to feel fresh and older and new.

When my elder sister finds out about my decision, she teases me: “What?” she exclaims. “But you’re a good, Pakistani girl!” I bristle. It is only years later that I realize it is not the good I object to. It is the Pakistani.

When I am seventeen, my Indian friend, who has pale skin and pale eyes and shoulder-length, layered hair, is complimented for her beauty. I watch her smile and shake her head and feel something writhe inside of me. I wish it were jealousy. Instead it is a deep, rolling rage, one that I tuck in and smother. In my head, I imagine all the girls tanning and bleaching and cutting and dying, vying for the same sort of attention. My friend confesses to me that in India, it is only her skin that is complimented. For her aunts and uncles, her hair is short enough to be shameful.

Afterward, I think about the Femina Miss India 2019 pageant pictures and the Twitter storm criticizing them: all the women chosen look the same. One tweet rants, “They all have the same hair, and the SAME SKIN COLOUR, and I’m going to hazard a guess that their heights and vital stats will also be similar.” I look at the contestants. I think: she is right. And I try not to think: they are all pale. They are all pale and long-haired and beautiful.

That summer, I am sitting on a bench in our tiny neighborhood park. The grass is dewy and bright. My t-shirt dress brushes the top of my knee-caps. The sun, harsh and unforgiving, heats up my shins, and my mother frowns at the exposed skin. She says I should try and preserve my color. I remember how, every day of elementary school, she would lather me in sunscreen and full sleeves and long pants, until I was old enough to protest. Now, she sits beside me in her jeans and UV-protected long-sleeve. She looks young for her age. Her skin is healthy and fair.

“All my classmates want to tan,” I reply, and I’m only half-joking. The Caucasian girls in my year complain of their paleness. They think whiteness looks sickly. After a summer in Florida, one holds her forearm up against mine and says, “look, I’m even tanner than Anya!” with no small amount of pride.

After my day in the park, I examine my tan legs and short hair in my bedroom mirror. I try to imagine what my grandmother would think. The truth is I did not want to be fresh or new or older in high school. I wanted to be white—or whiter, at least.

In Pakistan and India, women cut their hair as a sign of defiance. They sever the link between femininity and hair length with proud grins and the chink-squeak-chink of scissors. They reject the models with pale skin and quiet, plastic smiles. 7,000 miles away, in my hometown of Cleveland, Ohio, I wonder sometimes if I cut my hair because I wanted to conform.

The first night after the cut, I lie in bed and indulge myself in one moment of terrible, all-consuming panic: my lungs freeze in my chest; my nails dig into my palms; my eyes go wide and dark against the ceiling. Feeling the foreignness of my straight-pressed hair, my throat thickens. I feel sick. Like a phantom limb, I imagine my braid stretching out beneath me, curling underneath my pillow, and I realize suddenly, terribly, how it is gone, really, truly gone, that by now it has been deemed worthy of donation and shipped away, that if I ever want to grow it back it will take years, maybe a decade, before I feel the weight of my braid again. I have made an irreversible decision. I have become something I am not, or, rather, have given up something that I was. I fall asleep with my cheeks wet.

The next morning, my panic feels silly. Walking up the steps of my high school, I do feel new, with my short ponytail pretty and bouncing. The day is bright with winter sun. In assembly, my friends giggle and grin. Classmates I rarely talk to stop to compliment me in the halls. In the evening, when my mother asks me if I regret it yet, I shake off any remnants of the night’s grief. “No,” I reply. “Of course not.”

Four years later, and my hair has grown back long enough to braid. It is nowhere near its old length. I doubt it ever will be: I am in the habit of cutting it at the start of each year. I do not feel rebellious. At least, not anymore. Sometimes, looking at my reflection in that very same salon, I feel that I am severing away little parts of myself (my cousin’s gaze; the smell of mehndi). But I hold on to that doubt. It tethers me in a way that feels necessary. Secure. Other times, I feel the same elation at my short hair that I felt four years ago. I relish in its soft swishing and high ponytails.

I know cutting my hair is a choice, and that choice is mine; I suppose that sometimes that responsibility is hard to swallow. Alone in my dorm room my first year, I braid my hair before bed, for fear of tangles and catastrophe. Against the bustle and novelty of college life, the action is soothing. I miss, sometimes, the weight of my long hair against my back, the subtle shifting when it swung side-to-side. If I think back far enough, I miss my mother’s brown hands weaving the strands together, slick with coconut oil and the smell of home.

—Anya Razmi is a first-year in Pierson College.