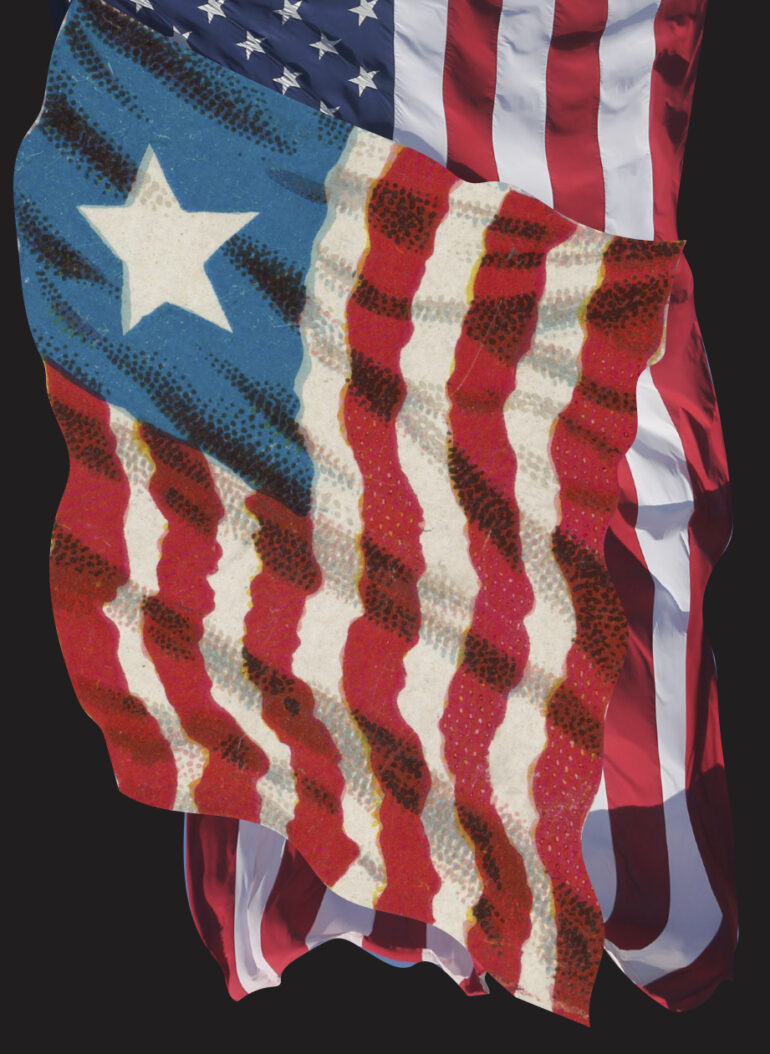 Liberia is the land of my birth. Tiny, with a population of about five million people, it was the first African nation to gain political independence. In Africa, some prefer to call it “small America,” others “the America in Africa.” Why? Because Liberia was founded by Black people from America, many of whom were formerly enslaved. Indeed, there couldn’t be better monikers for a country whose first ten presidents were born on American soil. But to me, these labels are meaningless sounds, mere rhetoric meant to invoke good feelings in a people languishing in poverty’s depths. The difference between the two countries couldn’t be any wider. My country ranks in the pantheon of the world’s poorest nations, while America is the world’s biggest economy. Yet nowhere is the difference between both countries more apparent than in their conception of individualism.

Growing up in Liberia, every day was the same: clear and sunny, beaming with the fresh warmth of a hot summer day. In the scourging heat, I would play soccer with friends, while adults occupied the kitchens, preparing the day’s only meal. There were families that would go weeks on end without food. That was the group to which my family belonged.

But when it was dusk—the sun sliding into solemn repose, the moon and stars beginning their nocturnal course—all families gathered. As the night unfolded, I would, like other kids, make my way to the open space where neighbors congregated. Some nights were chilly, with the thick and dry wind, larded with the smell of tropical orchids in bloom, beating against our fragile, often malnourished faces. When everyone had settled in a spot, the adults would begin telling stories.

Listening to stories was a daily chore. One story I frequently heard throughout my younger life was about “the land of the free.” That this phrase squirmed its way to my small slummy hometown, into the ears and onto the tongues of men, women and children whose lives had been arrested by poverty is still befuddling. I became familiar with the phrase before I knew the country’s name. When the adults told the story, some pronounced it “Ar-marica,” or others, “Air-merica.” But I didn’t care about the correct name or pronunciation. Nor was I interested in the authenticity of the story, for I knew that the adults who narrated it had never been on a plane, let alone traveled to America.

As the adults would explain, America was a country of enormous wealth. There were no haves and have-nots. It was the best in everything, including education, health, infrastructure. Sometimes, an adult would mutter that if there was an asphalt road connecting Africa to America, he would walk to enter America. That, they said, was better than wallowing in abject poverty. And so, I came to believe that America was the land of milk and honey.

I was also told that America was the best place for the individual to rise out of mediocrity. Human flourishing, through individual self-actualization, was the modus operandi. One could do whatever, whenever and however she desired. Everything the individual wanted was readily available, so long as she could work at it. It seemed to me that American society aided and uplifted its people towards the realization of their goals. This bit of the story glued me to those nightly conversations. It was how I came to understand American individualism, long before I could dream of coming to America.

Individualism is America’s mantra, the crux of the American dream and American life. The country was founded on the cult of the individual, the belief that the country could only thrive when the individual is left to herself, and that she should engage in acts which maximize her happiness and satisfaction. In this way, the individual attains a sense of self and asserts her true identity through the exercise of her freedom. Americans cling to that individualism as a kind of inheritance that can’t be denied.

Back home, the kind of individualism I learned was steeped in moderation and boundless kindness. It taught that, as an individual, I have my own goals and make my own decisions, but only with the understanding that whatever I do either helps or harms some other individual. This is not a moralist perspective: I use “help” and “harm,” not “good” and “bad.” The true individual is one who helps another individual, not by necessarily giving or doing something for them, but by refraining from that which would harm them. Even the “rugged” individualist does not want to be harmed. And to the extent that I do not harm someone, I contribute to society by allowing for peaceful coexistence. Hence, this individualism considered the common good as a collection of individual goods.

Since coming to America, my childhood view of American individualism has changed. Recently, I went with a friend to get groceries from a store not far from Yale’s campus. He took several items, as did I, but he was short two dollars. Bearing in mind that we are friends, I gave the two dollars to the cashier. Once we left the store, I told my friend that he shouldn’t bother to repay me. I grew up understanding friendship this way: friends are supposed to assist each other, be there for one another, especially during times of uncertainty and when in dire need. Surprisingly, after about a week, this friend transferred me two dollars through Venmo. How he guessed my Venmo username, I cannot tell. But I was taken aback, and realized that it was a cultural difference about individualism. Back home, when someone does something for you and makes it clear that there are no strings attached, you don’t repay the person. And to return what one has given or rebuff what one has done out of goodwill is interpreted as a disregard for friendship.

Relationships in America seem to embody a tension between one individual and another. In other words, individuals interact with one another with the presupposition that everyone comes to every encounter as equals, and therefore, no one must allow herself to be aided or ‘pitied’ by another person. Even when one asks for help she does so by offering something in return. The fear is that any acceptance of assistance––of whatever kind––means defeat; it amounts to an admittance of one’s weakness, one’s vulnerability, one’s loss of self.

But it is precisely this absorption into oneself that leads to selfishness. In Democracy in America, Alexis de Tocqueville warns Americans that “individualism at first dries up only the source of public virtues; but in the long term it attacks and destroys all the others and will finally be absorbed in selfishness.” If unchecked, individualism instills in the individual an indifference to human suffering and vulnerability. He pays no attention to anyone, he seeks no one’s help or opinions, and considers everyone an opponent to his agenda. In a word, the individual loses his sense of empathy. This is the character of American individualism today. It has gone amok. Kindness and compassion have become bêtes noires in modern American society. The American individualist seems to disregard the interest of the community. We need not look to history books to know this is true. The evidence is right before our eyes.

The COVID-19 pandemic has brought to the fore the danger of American individualism. While doctors and healthcare workers risk their lives to save everyone’s, the simple act of wearing a mask––an act of kindness to protect all of us––has been politicized, dismissed, and construed as an infringement on individual rights. For all the stories I heard about America as a child growing up in another country, I never imagined that individuals would be so self-seeking that they would ignore the common good. They refuse to grasp that the common good is quintessentially the sum of individual goods and that the destruction of the common good is necessarily the destruction of each individual good.

But staunch proponents of American individualism or “rugged individualism” lament that this account doesn’t favor personal freedom, for what is the individual then, they say, if she cannot do as she pleases, but must conform to the collective interest? They pontificate that the individual ought to be allowed to pursue her own desires independent of any external influence if she is to be truly free.

But the common interest does not exclude the individual interest. In 2014, Liberia experienced one of the deadliest Ebola outbreaks in recent memory. Many lives were lost. For a time, people claimed that the epidemic was a hoax and that health restrictions were counterproductive. Like some Americans of today, there were Liberians who refused to wash or sanitize their hands while in public spaces. Whole communities followed suit. But in those areas where individuals acted to protect themselves, thereby protecting others, the cases quickly dropped. Eventually, people followed health guidelines thoroughly. In every shop, store and supermarket I entered, and in every household, it became mandatory to wash your hands and maintain social distancing. Community leaders, government officials and members of political parties went across the country raising public awareness about Ebola. Liberia eradicated Ebola because everyone started to live according to our conception of individualism: help everyone, do harm to no one. Because of the lessons of Ebola, Liberia’s total number of confirmed COVID-19 cases is less than 2,200 in twelve months, compared to about eleven thousand Ebola cases in fifteen months. For a poor country with congested cities and towns, Liberia was not expected to maintain such low COVID-19 infection rates.

Although I am saddened by the nearly ninety people who have died in Liberia from COVID-19, I find solace in the fact that things are not as awful as they were in 2014, because individual Liberians know the benefit of acting in the common interest. Liberian individualism is based on a sense of duty to community and humanity and the recognition that each person needs a giant’s shoulders on which to stand. American individualism would benefit from learning the same.

—Abraham Keita is a first-year in Branford College