Nothing seems to shock Alicia. The best anyone can manage is to make her laugh. She doesn’t emit a chuckle, exactly. It’s more a thrum, a trill, always drawn out a beat too long. It’s what I hear when I ask her on the phone if I can join any of the events at the Panthean Temple. Weekly rituals are open to the public, so she sends me a friend request on Facebook and tells me that next Saturday’s gathering will be an “Ostara.” But she offers no further explanation.

The sign outside Alicia’s door reads, “Witches Parking Only, All Others Will Be Toad.” When we meet, her overall effect is handsome: her tranquil gaze, her cascading reddish hair and her wide figure, clad in black velour. We pass through a small kitchen and take a seat in a living room filled with paintings and pagan paraphernalia. To the world, she is the Reverend Alicia Lyon Folberth, president and priestess of Connecticut’s first Wiccan and pagan temple. Her website boasts of its certification: the Temple is a 501(c)3 organization. Alicia is now a neophyte, by oath, in what is called Odyssean Wicca. She is recognized as head clergy by the state, authorizing her to make hospital visitations and perform weddings and funerals. But she also gives psychic readings on a website run out of Luxembourg, and performs tarot readings at cafes.

I let Alicia steer the conversation. She loops in and out of anecdotes—a deluge of leads that I want to follow but can’t, because her stories run on. Soon it becomes clear that there is no temple. There is Alicia’s apartment in Derby, Connecticut. There is Panera Bread, a favorite meeting place. There was a Unitarian church, but only briefly. There was also Alicia’s bookstore in East Haven, but she lost it during the hard years when the recession struck, just as she was divorcing her husband. I realize that the Temple exists wherever Alicia may be.

Wicca is a religion that’s hard to pin down. Developed in mid-twentieth-century England, it draws on ancient and modern conceptions of the occult. Attending public classes is the first stage of commitment; once neophytes have sworn their oaths, membership in the Temple, the Outer Court, and the Inner Court, comes into reach. The Temple’s Articles of Faith could constitute a manifesto of modern liberalism: “Harm none”; religious tolerance; environmental consciousness; gender parity.

But the Panthean Temple’s congregants are not united by any particular tradition. Rather, they share a propensity for free religious thinking, since most having turned away from the strict faith in which they were raised. Asked to explain the difference between prayer and Wicca magic, Alicia tells that me that magic “is an active form of prayer. We’re working directly without deities, there’s not this kind of top-down structure.” Pagans, from what I gather, are people who see the status quo as corrupt. Before the ritual, the conversation winds from the danger of vaccines, to the menace of corporations, to the greediness of Christianity.

Looking back, Alicia tells me that she found divinity in the woods of North Salem, New York. One day, her father began to chop down her favorite tree, and from inside, she could hear her tree screaming. Why couldn’t her parents hear it? In adolescence, she discovered that she was telekinetic, too. “It’s weird when things fall off the wall,” she says, “and you realize it’s because you’re angry.”

These experiences drove Alicia to seek a spiritual outlet. At the suggestion of a holistic veterinarian who had treated her ferret, she started studying Reiki, the Japanese energy-based healing practice. When a guy she’d met on a high school production of The Rocky Horror Picture Show popped up years later at a comic book signing in Philadelphia in full medieval costume, the two began dating and frequenting Dungeons and Dragons gatherings, where she met a woman who became her first Wiccan teacher. She met another at the Department of Motor Vehicles, in the early years of her practice.

People eventually turn up to the apartment, and each offers another variation on Wicca. A man and woman in their sixties are followed by a young mother carrying a two-year-old. Pat, the young mother, says that, during her Catholic upbringing, she always felt troubled by phrases like “God-fearing,” but loved learning about Greek mythology in school. So when her family got Internet access in 1997 and she discovered paganism, she immediately felt it was right for her. It took a decade for her to work up the nerve to go to a festival. Today, she’s one of Alicia’s most committed students.

When we finally begin the ritual after hours of chitchat, it turns out to be a simple affair. We stand at the corners of a small table that holds incense and candles, and we chant, “We are a circle, we are moving together, we are one.” We chant, “Hail, and welcome!” to the north, south, east, and west. We invoke Greek gods and then read a version of the myth of Hades and Persephone. We finish with a sip of grape juice and a bite of cookie. Where was the sacrifice? The spell conjuring? I look at my watch and note that, out of three hours together, we spent thirty minutes on the ritual.

These people have come together half out of a search for alternative religion, and half out of a desire for an accepting community. As Alicia’s wild life indicates, the Panthean Temple is far from just a space for witchcraft. As I look around the room, I remember the words of the older couple, erstwhile hippies who were present at the Panthean Temple’s first ritual in 1995. They are not open about their practice, so they suggest I call them Mr. and Mrs. Smith. And they insist they are not pagan, not really—they have their own nature-centric belief system. But they are here because, as Mrs. Smith mentions, “it gets a little lonely having a spirituality of just one.” 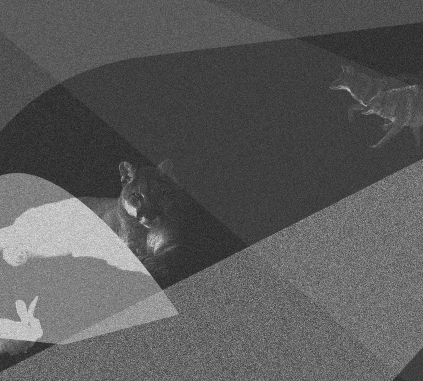