A three-storey building on the corner of Day Street and Edgewood Avenue bears two side-by-side signs. The first reads, “A Walk in Truth: Christian Books”; the other, “blackPRINT: a Black-American Heritage Gallery.”

Hanging in the window to the right of the entrance is a large banner with the words “TELL ALL THE CHILDREN OUR STORY—WE’VE COME THIS FAR BY FAITH” in red, black, and green, the colors of the Pan-African flag. Campaign signs for Mayor Toni Harp run along the windowsills, beside black-and-white posters with the slogan “#BlackLoveMatters.” Fixed to the front door is a quote from the African American physician and astronaut Mae Jemison: “Never be limited by other people’s limited imaginations.”

Bea Dozier-Taylor, the New Haven native who opened the bookstore and gallery in 1988, has devoted the last twenty-seven years of her life to this message. “He who controls the images controls the mind,” she says, “and too often Black people are sold on false images of ourselves. This is a place for Black brilliance and Black beauty.”

At 64, Dozier-Taylor has the easy wisdom of someone who knows what she believes. Some days she wears a wrap over her short-cropped hair, other times a baseball cap. She is quick to smile, if somewhat slower to laugh. She does not mince words, nor does she allow anyone to put them in her mouth. She quotes verses from Elizabeth Alexander, Langston Hughes, and the Bible in good-natured debates with both first-time visitors and regulars.

“He who controls the images controls the mind,” Dozier-Taylor says, “and too often Black people are sold on false images of ourselves. This is a place for Black brilliance and Black beauty.”

Her store’s shelves are stocked with the works of Black activists, scientists, radical thinkers, and historians. Topics range from the false mythology of Columbus’ “discovery” of America to the short life of Emmett Till, whose murder by white supremacists in Mississippi drew national attention to the Civil Rights movement. Along one wall, Romare Bearden’s collages depict Black people in states of workship and repose. Poster boards with images of Malcolm X, Martin Luther King Jr., Maya Angelou, and Barack Obama rest against the opposite wall.

Christian paraphernalia lines the back section of the store: anointing oils, votive candles, prayer cards, and religious calendars. There are books on the importance of faith in Black communities and African American Jubilee edition of the King James Bible, which includes color illustrations and articles on Black histories. A portrait of Christ as a Black man, surrounded by Black apostles, watches over the entire store from the back wall.

The store’s motto is “Selling us on ourselves.” To Dozier-Taylor, drawing attention to Black struggles and accomplishments both in cultural and religious contexts not only instills greater pride in Black patrons and heightens awareness in non-Black patrons, but also corrects misrepresentations of history. Still, she says, while most appreciate the Blackprint section of the store, some visitors of color take issue with Dozier-Taylor’s decision to only display images and works that portray Biblical figures as dark-skinned Semitic people.

She opens her doors to people from the neighborhood who have businesses but might not yet have an office, particularly businesswomen of color who need a space to meet with clients.

“I often run into this sentiment of ‘Don’t touch my Jesus!’” says Dozier-Taylor. “Or people say, ‘Just knowing Jesus is enough,’ as if I was politicizing everything by showing him as a dark-skinned man. And that’s another thing I hear, especially from Black men—‘I ain’t gonna worship some white man.’ But because I do know Jesus and how important he is, I respond, ‘Well, if that’s your problem, get yourself a Black one!’”

She adds, “Look, it’s not only about presenting an alternative image. Answer me this: do you think Joseph would have been able to hide Jesus in Egyptland if Jesus looked like a Scandinavian?”

Dozier-Taylor works to make the bookstore a beacon in the community. She has, over the years, offered advice to other Black entrepreneurs on the verge of opening their own businesses. She opens her doors to people from the neighborhood who have businesses but might not yet have an office, particularly businesswomen of color who need a space to meet with clients.

The bookstore also hosts events showcasing Black artists. At a book signing and reading in mid-October, self-published African American author Jill Snyder read from a book of love letters between her mother and father during their courtship in the nineteen-thirties. People filtered in and out of the event, and at any given time over the several-hour-long period there were roughly ten people in attendance, all Black, all local, all engaged.

Snyder explained to her audience that she viewed creating the book, entitled Dear Mary, Dear Luther, as an exploration of family histories that long untold. In researching her mother and father, she found documentation of her grandparents and great-grandparents, the latter of whom were enslaved, and had fled slavery, in the American South.

“My grandmother always said our ancestors escaped slavery in Virginia,” Snyder recalled. “But I only had that as an anecdote, something people weren’t really willing to speak on because it was too painful. When I found my great-grandfather’s obituary, it finally validated his story and brought to light some of this little-known Black history.”

“We often have so much fear of our own communities,” Dozier-Taylor says. “Despite all our love, there is this fear, and it’s a strange dance we do.”

Snyder spoke to her frustration with widespread portrayals of Black men as being rough and crude. An exchange of written love letters, she pointed out, is a form of romance seldom afforded Black men in their depictions in novels and other media. She added that her father, during the time she knew him, always appeared a hard and stoic man. Finding his tender letters was a revelation in and of itself.

“Here is the heart of my father,” she said, fanning the dog-eared pages of her book. “He put his heart on paper.”

Dozier-Taylor hopes that such events impact her neighborhood. Several friends have urged her to move downtown, for increased safety and foot traffic, but staying in Dwight is important to her. “We often have so much fear of our own communities,” she says. “Despite all our love, there is this fear, and it’s a strange dance we do. I wrestled with that for a long time, wondering whether it wasn’t some kind of punishment that I was here. But recently it became very clear to me: I am here precisely because I am not afraid. I know that this is where God always intended me to be.”

Behind the building that houses A Walk in Truth and Blackprint is a small backyard garden, between the store and the neighboring Antillean housing project. Up against the fence of the yard is a bright mosaic depicting Black men, women, and children. Beside the mosaic is a grey stone cross.

“Remember that this space is, first and foremost, a place of exchange,” Dozier-Taylor explains. “For people to exchange ideas, perspectives, hope, and love. That mosaic is showing you an indaba—a place to meet, a place to gather, a place to exchange. And that is what I try to do here: give people their indaba.”

Over the nearly three decades Dozier-Taylor has occupied her corner, she has seen the neighborhood around her change. She has seen businesses open and close. She has seen old liquor stores pack up and new schools open. She has seen schools torn down to make room for condominiums. She has watched and aided the growth of Black entrepreneurs, just as she has seen Black tenants wracked with rent from white landlords. Through it all, she has built and nurtured a space of safety, learning, and welcome for her community. Through it all, the indaba’s doors stay open. 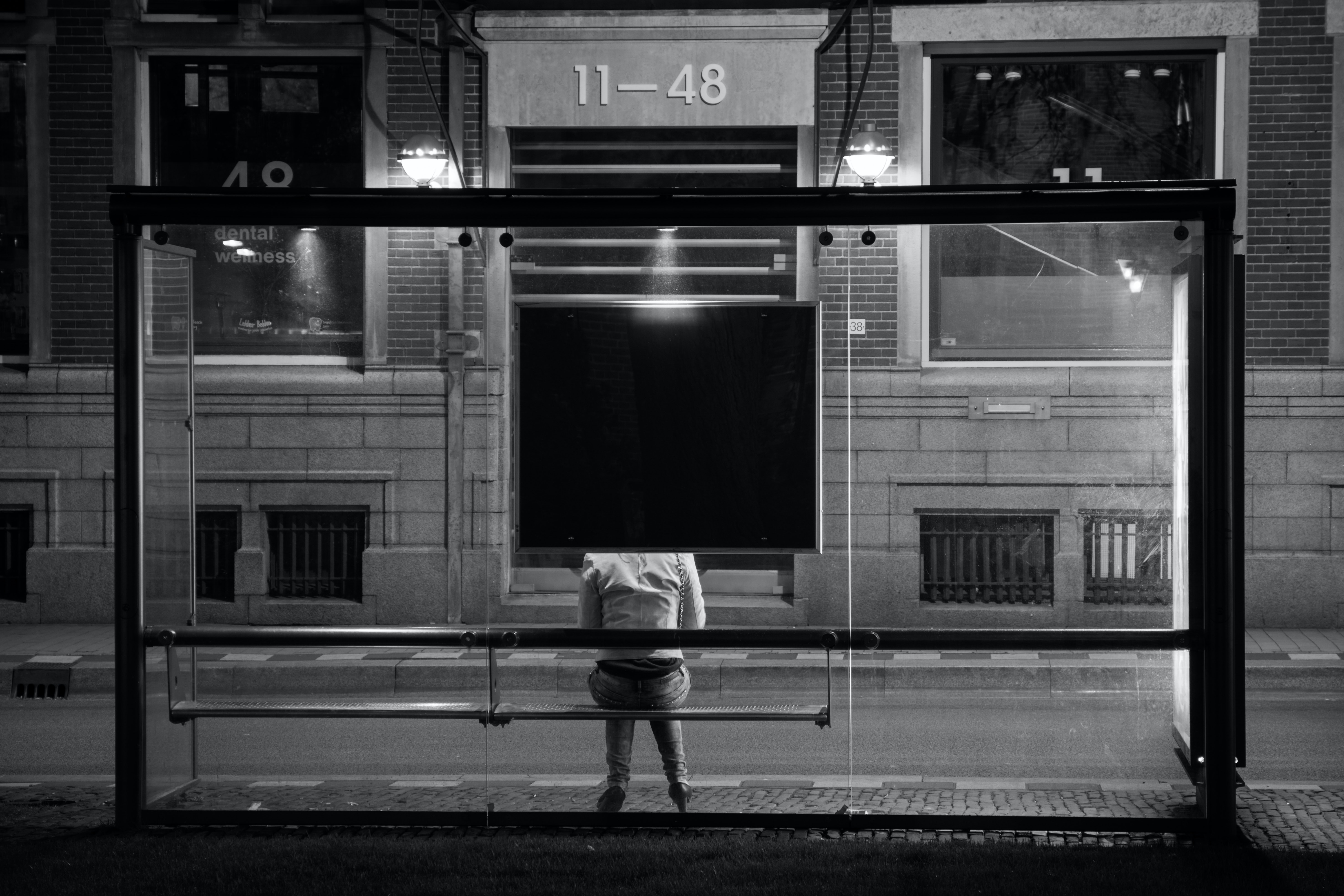