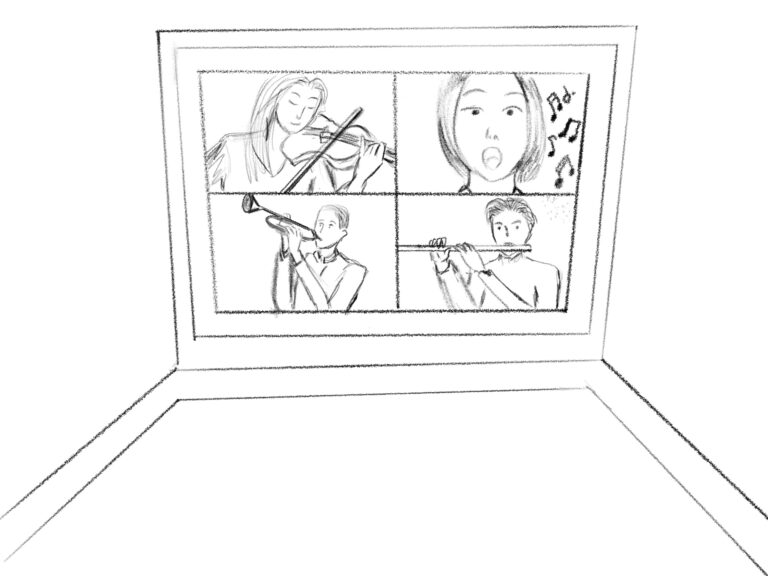 A Special Type of Relativity

Concerts are my theory of relativity — they warp time and space.

Before the pandemic, I used to slip into the backs of concert halls, restaurants, and radio show basements to attend two to three shows a week. Now, I watch livestreams while sitting in bed, running outside or lying on the grass with headphones while looking at the clouds. I know it’s not the same as sharing a physical space, but virtual concerts close the distance––sometimes thousands of miles of distance––between the performers and me, so that we’re in the same virtual venue.

When I’m at a concert, virtual or otherwise, time always seems to bend. Some moments feel like eternities, in a good way—especially silent moments, where we feel like we are suspended in air, and everyone holds their breath. Other moments pass before I even notice, slipping away before I can fully grasp their presence.

When I’m watching and listening to musicians, I both ignore and am hyperaware of the intricacy of time and how it stretches and contracts, like somewhat-risen sourdough. I watch, listen, feel for hours without realizing that time has passed. I notice when an ensemble is in perfect synchrony, or when the tiniest rhythmic detail falls out of step. Performers communicate complex rhythms with little gestures. A slight eyebrow raise. Leaning ten degrees to the left. A barely-audible breath. They seem to read each other’s minds, perceiving time together, as one. And they’ve invited me, an audience member, to do it with them.

There’s something magical about synchrony. Bands, orchestras, choirs, dance groups, and actors—they all aim to coexist in time. I think back to a moment this summer when I video called a few fellow musicians. We’d been in a chamber ensemble together and had been scheduled (pre-pandemic) to perform Beethoven’s Op. 59 No. 1 quartet that evening. Instead of performing, I navigated to our favorite recording of the piece and clicked “share computer sound.” We listened, and we cried. I don’t remember much else about the call, except how it made us feel. Grief, yearning, exuberance. Connectedness found through synchrony. A simple act of sharing something that’s in time. Sharing a moment in time. Sharing time.

Sometimes, though, despite the beauty we’ve found in synchrony, sharing time isn’t what we want or need, and learning to take things at our own pace doesn’t make us any less connected. There’s a musical exercise I’ve often turned to since the pandemic’s onset, during virtual rehearsals. Zoom lag renders synchronous playing impossible. So we aim for asynchrony. We first agree on a word or short phrase that characterizes the passage. One of us gives a cue—an in-character breath to show that we’re starting. Then we play. We ignore that we’re not in sync. We don’t think about harmony, and we don’t think about lining up any rhythmic motifs. Using phrasing, physical gestures, and timbre, we instead focus on communicating a certain musical energy. An emotion. It doesn’t sound good. And that doesn’t matter.

So we take away the ticking milliseconds and obsession over synchrony that I once thought defined a performance’s identity. What’s left?

Grief, yearning, exuberance. The emotions that have been there all along, but stronger now, rawer. Music is our world—an imperfect sphere suspended in spacetime. We don’t need to understand how it’s all connected. We just need to know that it is.

— Phoebe Liu is a junior in Trumbull College.