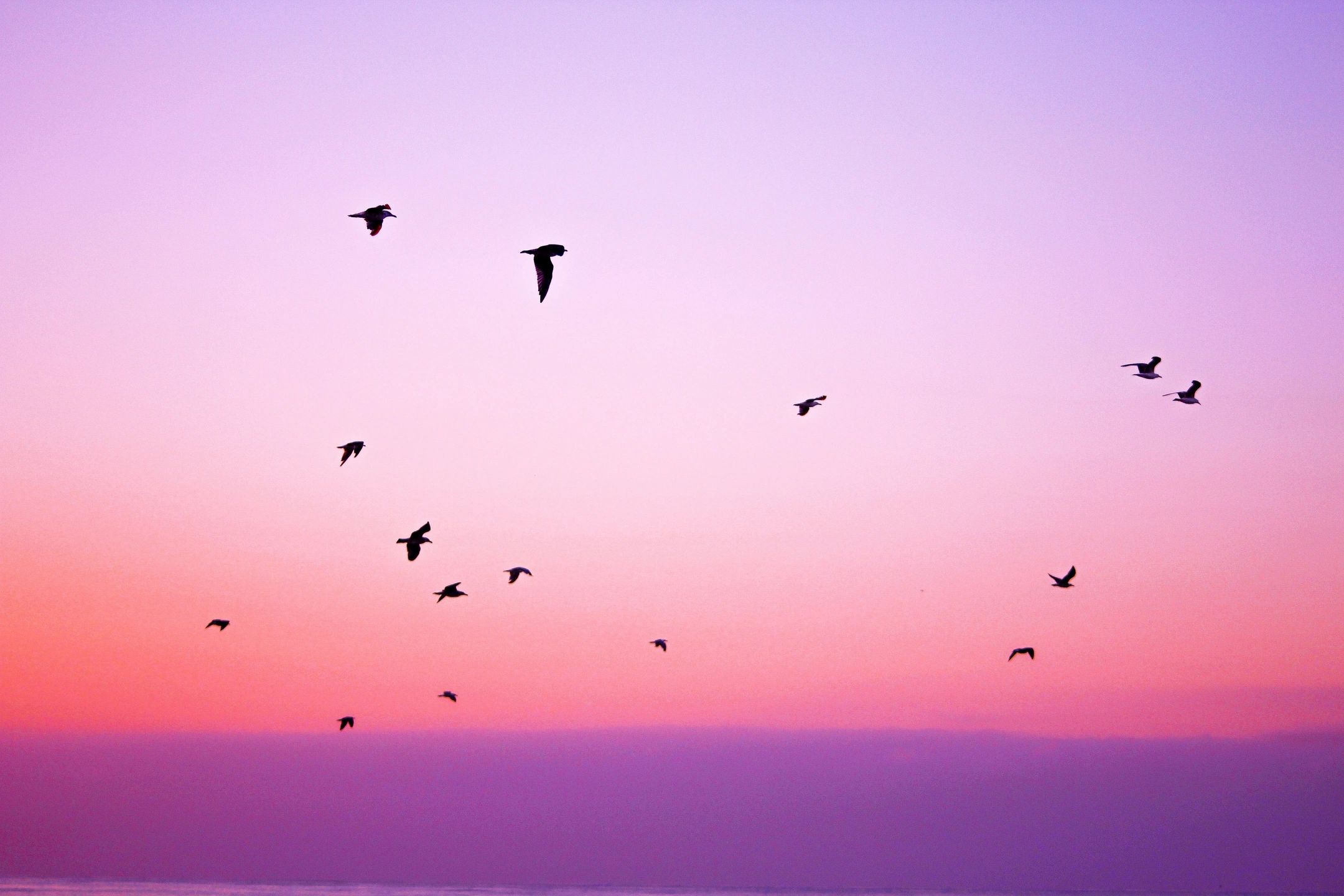 BEAUTY AND THE ‘KEETS

As parakeets take over New Haven, City Point residents must decide whether to protect the birds or exterminate them.

Sea Street and Howard Avenue is just like any other intersection in City Point, a neighborhood at the southern tip of New Haven. It’s a quiet, residential area, with colonial-style houses, well-mown lawns and chairs set out on the porches. Today is Wednesday, trash day, and the garbage bins have been rolled down to the curb. This, I’ve been told, is the best place to find a Monk Parakeet.

Up where the branch of a nearby tree hangs over a parked car, there’s a giant bundle of dead twigs, like an enormous, desiccated beehive. As I look, a bird flutters out of the nest and lands delicately on a utility pole. It’s about a foot long and the color of lime candy, with blue-tipped wings and a short, rounded beak, like a pair of pliers. I hear a snapping sound and look over just in time to see another shock of green feathers wrestling a twig from a dead branch. The two of them look like something you might expect to find on a Jamaican doorstep singing a sweet song to Bob Marley—not here, a block away from the Connecticut Turnpike, their squawks blending with the rumble of a passing garbage truck.

Monk Parakeets are native to the savannas of South America, but for the last fifty  years, they’ve established wild and self-sustaining colonies up and down the coast of Connecticut, as well as New York, Florida, and even parts of Texas. By nesting communally–each condo-like structure big enough to fill the back of a pickup truck–they insulate themselves against frosty New England winters. It’s still unclear how they settled here, over five thousand  miles from their native habitat. But that hasn’t stopped people from theorizing.

“I actually know the origin of the parakeets,” Heather writes at the bottom of an article in Damned Connecticut—an online journal featuring the “weird, the odd, or the unexplained” in Connecticut. “They appeared in Stamford in the early nineties  after a truck transporting them was involved in an accident.” Lenny disagrees. “The truth of the matter is this,” he writes. “The parakeets escaped from the Beardsley Zoo in Bridgeport about fifteen years ago.” Another commenter, aptly named MY2CENTS, interjects. “Lenny was close … the birds escaped from the Railway Express Terminal in Bridgeport.”

The truth is probably less spectacular than the readers of Damned Connecticut would have you believe, involving some combination of exasperated pet owners and crafty parakeet escapees in the late nineteen-sixties and early nineteen-seventies. “They are noisy pets and perhaps irresponsible pet owners grew tired of the constant squawks and released them outside,” the Connecticut Audubon Society speculates. Free from the private serenading of their pets, those owners—and everyone else in City Point for that matter—suffer now from a very public army of wild squawkers.

“[The parakeets] are up at dawn and you can often hear hundreds of the birds chattering at the same time,” said Noble Proctor, a former Professor of Ornithology at Southern Connecticut State University, in an interview with the website CTMQ. “It’s penetrating.”

Standing below the nest on Sea Street, I watch two more birds emerge and hop along the branch, their tail feathers fluttering. They cock their heads in quick, jerky movements, like dogs staring at a treat. I forget myself and watch them move for a few minutes, my heart beating fast. It feels like I’ve been granted special access to a private zoo enclosure.

“I love them,” one New Haven resident, Mindy Roseman, tells me on the phone. “I came to visit the house five years ago, and there were parakeets in the tree. I thought, ‘my God, we’re moving to a tropical paradise!’” When I ask her about the noise, she laughs and says, “You know, I-95 is only six blocks away. I’d rather hear bird sounds than the sound of motorcycles.”

But Roseman acknowledges that she doesn’t speak for everyone in the neighborhood. Some people are openly fed up with the birds and their antics. “Particularly the old-timers,” she adds.

A couple weeks ago, I opened my phone to a voicemail left by one City Point resident, Earl Benson, who preferred to use a pseudonym. “Leave a message at my house number, because I’m illiterate when it comes to texting and stuff of that sort.” His voice is slow and raspy, and he occasionally allows himself to wander from subject to subject, but he is succinct when it comes to the parakeets. “They are dangerous. I would be very much in favor of removing them.”

He has a point. For one thing, the four-hundred-pound nests have been known to fall unexpectedly. “The largest nest recently fell off the tree, even after it survived the last wind storm,” City-Pointer Raquel Seacord wrote to me. “It was the size of a small car. Thankfully it fell on the street.” What’s more, the tropical birds like to nest near warm places, often on top of electrical transformer boxes at the top of utility poles, which has led to unexpected fires and power failures.

“My real concern is that it would fall on somebody or even kill somebody,” Benson tells me.  “I care more about human beings than parrots.”

From 2005 to 2010, the utility company United Illuminating Co. (UI) and local Connecticut governments jointly led a piecemeal campaign to rid the area of parakeets. Small bands of uniformed UI workers worked covertly to tear down the nests, often in the dead of night. They removed hundreds of nests from their utility poles and lighting fixtures, setting flocks of anxious birds loose, without the shelter they rely on to survive this far north. For good measure, UI workers also netted hundreds of parakeets and turned them over to the U.S. Department of Agriculture for asphyxiation with carbon monoxide gas. But a public outcry spearheaded by the Darien-based animal rights group Friends of Animals—which included a threat to forego decorating their homes with holiday lights—eventually put enough pressure on the company to stop the euthanizations.

Priscilla Feral has been president of Friends of Animals since 1987. She was a staunch advocate against United Illuminating, leading multiple lawsuits against the company. Fifteen years later, Feral still has an edge to her voice when she talks about UI. “I remember I was sitting at my desk,” she tells me, “and there’s a blizzard outside. The snow is blowing sideways, and they’re yanking nests down. It seemed draconian to me. It seemed especially heartless.”

Feral has spent her life fighting for the rights of animals. “This company has contempt for [the parakeets],” she said in a 2008 interview, referring to UI. “They were compared to cockroaches and rats. They are keen on wiping them out of this environment.”

Earlier this year I was living in a house in Utah, when one night I woke up to find two mice scampering across my bedspread. I jumped out of bed and turned on the light. They were fat and patchy, with wiry grey hair and naked pink tails that jerked back and forth as they scampered across the floor and squeezed themselves beneath the crack in my closet door. Revolted, trying to forget the image of the twitchy little rodents crawling over my pillow as I slept, I spent the rest of the night on the couch. The next morning, I steeled myself to open the closet door, and found that the mice had made a nest out of an assortment of random household items: shreds of newspaper, wood shavings, string, and a used tissue harvested from my bathroom trash can.

On YouTube, there are hundreds of videos showing cheap, DIY ways to deal with mice. You can drown them in bowls of water, trap them in plastic bottles, crush them beneath falling weights. After watching one video of five or six slicked-black mice slathered in peanut oil, struggling to climb up the smooth surface of a glass bowl, I realized I didn’t have the stomach for this. So I drove to the supermarket and found a Tomcat mousetrap—a minimalist black box advertising “Clean, no Touch Disposal!”—and checked the price on the back. Only $3.99.

Mice and parakeets both cause damage to property, both inhabit spaces they aren’t meant for, both get in the way of regular human activity. But in Connecticut, mice are killed by the thousands, and parakeets galvanize a five-year conservation movement. The explanation, as far as I can tell, is the same reason there’s a Connecticut Audubon Society but no Connecticut Arachnid Society. We put a premium on beauty—one animal has it, the other does not. This kind of selective compassion demonstrates itself all the time, in the pets we adopt and the foundations to which we donate. A study conducted by Washington University, for example, found that participants more reflexively offered to donate money to aid traditionally beautiful animals—like koalas and giraffes—and felt happier when their money went to an attractive species than a needy species.

There is also the question of whether an animal is “deserving” of its death, which, to my mind, refers to an animal’s direct responsibility for its own inconvenience. Cockroaches, rats, pigeons, squirrels—they’ve adapted to encroach on our space, and are therefore somehow implicated. But the parakeets were brought here against their will. Should this matter? Do we owe an extra measure of protection to animals we’ve directly screwed over—like parakeets shipped across the ocean just to make our living rooms more colorful—than animals that made room for themselves?

Of course, our calculus of life-valuation takes a host of other criteria into account: lifespan, experience of pain, evolutionary complexity, proximity to “humanness,” ecological importance. All this informs our decisions about which animals deserve to live. But when it comes to New Haven’s parakeets, it seems clear that one element played the primary role in shaping public opinion.

“[The parakeets] brought joy to people’s lives,” said Priscilla Feral. “They were treasured in a way that cockroaches are not treasured.”

Is it okay to kill an animal based on subjective measures of beauty? I don’t know. But at the end of that line of reasoning remains the unavoidable reality of parakeet nests ripped down in the swirling snow, and panicked birds choking on carbon monoxide. That kind of senseless brutality is hard to look away from.

But here my moralizing is almost beside the point. We’ve established a way of life that requires animals to die—to keep our homes infestation-free, to upholster our furniture, to fill the back orders at McDonalds. And especially within a culture that unironically features both doggy hairstylists and twenty-four-hour extermination companies, the decisions about which animals deserve to die, and which don’t, have a lot to do with the way they look.

Friends of Animals and local advocates were successful in putting a stop to the parakeet  euthanizations. “We were able to capture the imagination of people outside the organization,” Priscilla Feral tells me. “They could not believe something so beautiful was subject to that kind of hostility.” Mindy Roseman seems to agree. “The way I see it, the parakeets are part of the great food chain of the planet. Live and let live, that’s my motto.” Now City Point and areas up and down the coast of Connecticut reverberate with the squawking of a thriving community of Monk Parakeets.

I bought the mouse traps, three of them, and placed them against the wall outside the closet door. The next day, I woke to find two small brown lumps crammed inside. A thin, spaghetti tail drooped from one of them. Careful not to make contact, I picked up the traps and rushed them to the garbage can, tied up the bag and dropped it in the bin outside.

Jesse Goodman is a junior in Berkeley College and an Associate Editor of The New Journal.