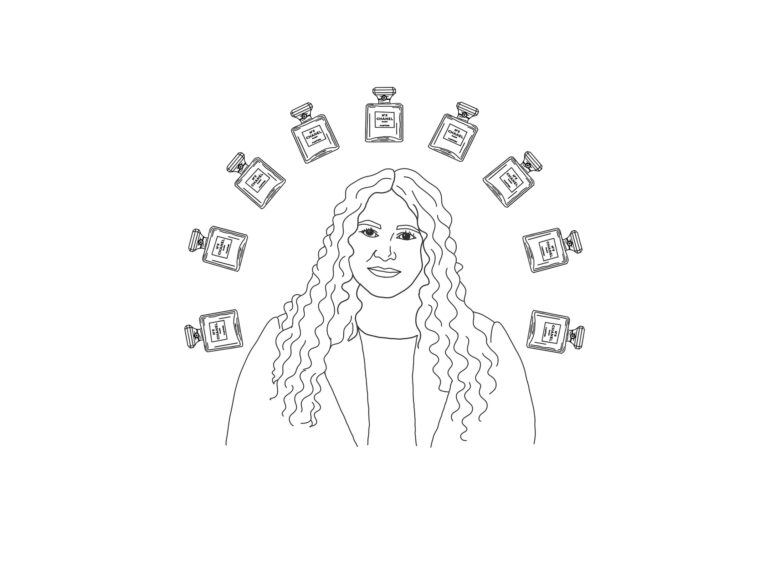 Professor Laurie Santos stands before a dark background, wearing a simple blue shirt and black jacket. She speaks deliberately and warmly—almost like a grade school teacher—as she traces celebrity’s etymology from the ancient Greeks’ devotion to their constellary gods on Mount Olympus to cosmopolitan stars in the modern era. Then a giant bottle of Chanel Nº5 fills the screen.

The fashion house had selected the Yale psychology professor for its ad campaign celebrating the 100th anniversary of the creation of Chanel Nº5, the scent that Coco Chanel said smelled “like a woman, not like a rose.” Chanel was recognizing a new sort of celebrity—a nontraditional, more egalitarian one exemplified by writers and journalists. In the video, Santos, who both studies celebrity and has become famous herself, suggests that a fascination with celebrity is intertwined with human DNA—it has always been present, albeit in different forms. However, the rise of social media, she notes, has altered the way people relate to celebrities: famous people are more accessible to their fans, and ordinary people can become famous overnight.

“The famous people are becoming not so different from us and the everyday regular people are becoming famous,” Santos said at the end of the commercial. “So I think this is a real revolution in the way celebrity is playing out in our culture right now.”

Santos’ research centers on animal psychology. But she is well-known beyond academic circles for her class titled “Psychology and the Good Life,” the most popular course ever offered at Yale. In 2018, Santos began teaching the course online under the title “The Science of Well Being.” In the three years since, more than three million people have taken the class.

In 2019, Santos expanded her audience and launched The Happiness Lab Podcast, which has more than thirty-five million downloads. In recognition of her status, she was named TIME’s “Leading Campus Celebrity.” Since launching the podcast, she’s been recognized in the airport and while completing curbside pickup at Target.

“That feels really weird, but it’s [only] a few people,” Santos said. “It’s not like I’m Beyoncé.”

Santos told me that she does not consider herself “fashion commercial material.” She remained adamant that she does not fit into the category of academic celebrity and said she doesn’t know of many academics who have become famous for their work. She seemed to suggest that fame is outside of the realm of academia and scholarship—an idea that might once have been true but which researchers now call into question.

Though Santos said she does not see herself as a celebrity, she is part of an emerging trend that Oxford University researcher Peter William Walsh has dubbed “celebrity academics.” He provided the examples of Judith Butler and Anthony Giddens. Academic celebrities, he explained, differ from scholars who are merely respected in their field because of the adulation and emotional attraction—and sometimes jealousy and derision—they inspire among their peers.

Through the podcast, Walsh said Santos might even have ascended to the status of a public intellectual—someone who is recognizable to the average educated person, like Cornel West or Stephen Hawking. By contrast, a celebrity academic is known by nearly everyone in their field but would be unrecognizable to most members of broader society.

Social media blurs the distinctions between the two groups, allowing academics to reach a far broader audience. It also allows scholars to display their personalities beyond their research—what Walsh called the “veridical self.” For example, Tufts University Professor Daniel Drezner and University of Manchester Professor Brian Cox have each launched successful Twitter accounts that share both research and personal anecdotes. This access facilitates a subjective and emotional relationship between the celebrity and their supporters, Walsh added.

When I called Walsh over Zoom, I interrupted his listening to Santos’ podcast—a discussion of Aristotle’s eudaimonia, from The Nicomachean Ethics. Santos is unusual in her ability to convey such complicated ideas clearly, Walsh said. “She speaks so well,” he said. “There’s something about her personality, about the relationship that I form with that personality by listening to her podcast, that makes me like her and that makes me give her my attention, which feeds into her celebrity status.”

In Walsh’s telling, the phenomenon of celebrity in academia arose in the nineteen-seventies and nineteen-eighties, when mass media began allowing people to learn about the lives of researchers beyond their scholarly output. Since then, celebrity in academia has surged ahead, with the most famous scholars, including Richard Dawkins and Michael Porter, amassing thousands of Twitter followers and massive citation counts on their papers.

Becoming famous usually confers an advantage upon scholars. Academia is generally a cutthroat industry, with pressure to rapidly accrue funding and publish to gain a competitive edge in the tenure process, Walsh told me. Celebrated academics can be released from teaching engagements to have more time for research and are much more likely to receive tenure or job opportunities, he said. Journal editors likely know their research areas and can tell who the author is, meaning their work is much more likely to be published, he added.

Walsh also noted that celebrity in academia is often accused of lowering the quality of scholarly output. Some argue that academic celebrities spend time on speaking engagements instead of research, that their work is published in part because of their status, and that journals do not subject famous academics to standard reviewing procedures. On the other hand, celebrity academics can communicate their research much more widely than most scholars; Santos, for example, shares her research with people who might not otherwise have access to academic articles or university courses.

Still, the idea that celebrity is at play in scholarship often receives resistance from members of the profession because it seems antithetical to the value of reason in academia, Walsh said.

“That kind of stuff is frivolous…Celebrity is the froth of modern life. Academia is supposed to be the substance. It’s truth. It’s beauty,” Walsh said.

He argued that the decreased barriers to academic fame—facilitated by social media’s rise—would lead not to democratization but to further inequity among scholars. Although more people have the potential to reach celebrity status, only a few will do so—and only they will reap the benefits of fame.

“It’s still on this upward trajectory, we’re going to see increasing differences, more inequality within academia,” Walsh said. “Inequality in status, in pay, in fame, in citation count, in Twitter followers—we’re going to see that continue to grow.”

As Santos told it in the Chanel commercial, celebrity seemed limitless and open to all. She spoke of the democratization of celebrity with optimism—now, she said, people truly feel they can become a celebrity, or at least become friends with one. But as Santos finished sharing her message, and her image gave way to a $220 bottle of perfume, it was hard to be so optimistic.

Rose Horowitch is a junior in Davenport College and an Associate Editor of The New Journal.