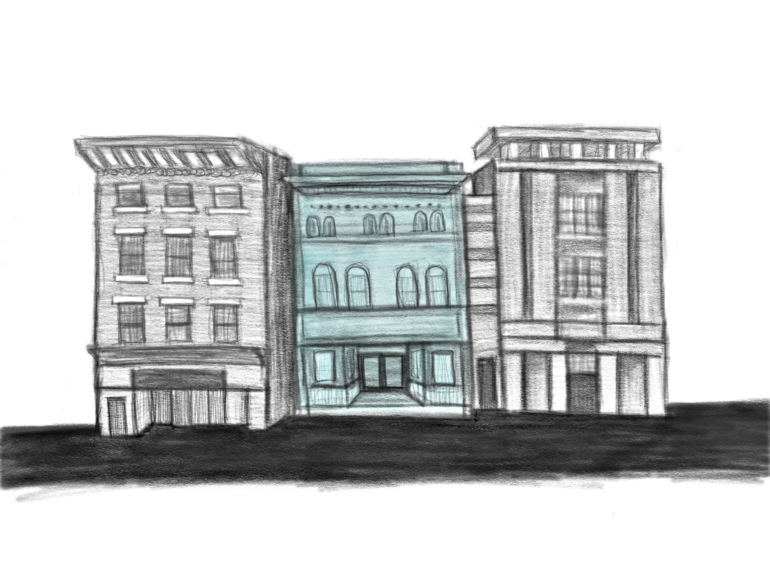 A Place to Linger

On a mellow afternoon in early April, the Downtown Evening Soup Kitchen’s new drop-in center hosted its soft opening. A sign in an archetypal Homegoods-Mom style hung above my head, fiercely combining both Comic Sans and cursive:

And it was right, minus the prayer: coffee and conversation dominated the space. Even though clients came for a variety of reasons––food, outlets, Wi-Fi, the bathroom––everyone, it seemed, ended up moving from a water-hungry Keurig to seating areas where other peers and volunteers perched.

The space was smaller than I expected––more a room than a floor. It was cozier than anticipated, too, in part due to its furnishings: orange chairs tucked into green-marbled tables, red brick walls, blue-grey-tiled floors interspersed with red-painted support columns, a satisfyingly full bookshelf, and stacked boxes of board games. There was no immediate evidence that the room was formerly home to a dog grooming salon, a (human) hair salon, and a businessmen’s lunch club at various points in time.

I volunteered on the fifth day of operation at the new Downtown Evening Soup Kitchen (DESK) location at 266 State Street. It was my first day there. Before, in the few days since opening, only two or three people had wandered in, my supervisor told me––but today, seven or eight clients gradually gathered in the space.

After showing me a series of adorable cat TikToks on his phone, one client, seated by himself with a French vanilla roast from the Keurig, invited me to ask him questions. He provided an answer before I asked any.

“It’s hard to find a place to be,” he said. “I’ve been homeless for twenty-five years. I think that’s the hardest thing.”

The Downtown Evening Soup Kitchen has provided food assistance out of the basement of the Parish House of Center Church on Temple Street (steps from the Green) since 1987, born from an era of welfare cutbacks that caused a soup kitchen resurgence not seen since the Great Depression. While the church is still in a convenient location for the population it serves, the space is both cramped and hard to access, a set of stairs being the only entrance to the underground dining space. When the doors open at mealtimes, clients tend to grab their food and go––there is little lingering, according Steve Werlin, DESK’s Executive Director. This makes it even harder for service workers, like mental health counsellors, to connect with clients in an already-crowded space. The Parish House location will continue to serve meals to clients, but the new space on State Street will supplement it outside of mealtimes with designated floors for both basic and higher-level services.

The new location is only two blocks from the Green, nestled between Café Nine and a tattoo parlor, ShowOff Ink Artistry. While looking for a building to buy, in addition to securing a spot on prime real estate in proximity to the Green, DESK’s leadership had looked for neighbors who would not feel hindered by the presence of the drop-in center.

Restaurants, studios, and boutiques are generally not ideal neighbors, according to Werlin, because of their dependence on people walking around between stores, who may be deterred by the presence of clients at a place like DESK. The 266 State Street location is advantageous because it has no neighbours across the street; instead, there’s a park. ShowOff Ink Artistry mainly serves repeating customers, less so roaming pedestrians, and Café Nine serves customers in the evenings when DESK’s doors are closed.

“We want to be good neighbors,” said Werlin. “We want to ensure that this is a service that is a net gain for them, for the neighborhood and for the community.” Werlin cited bathrooms as an example. “All these businesses that don’t want people who are on the street coming in to use the bathroom. Well, here’s a solution for that.”

The drop-in center’s first floor has been designed precisely to provide a place to be for its clients. It will be an air-conditioned haven in hot summers, a heated one in the winters, and a host year-round for restrooms, showers, food, beverages, Wi-Fi, and social interaction.

The roles of the two floors will be intertwined. While the first floor is designed to be welcoming––and to fulfill basic needs outside of mealtimes––the second will connect clients with a web of higher-level services that otherwise are not centralized in any one place in New Haven. By creating an initial space that is casual, there is greater incentive––or, rather, fewer obstacles––to engage with services upstairs. The combination of the two floors aims to weaken deterrents to seeking help, from inconvenience factors––such as having to locate services individually––to stigma against homelessness, mental health issues, and sex work.

James Adu is a program manager for Connecticut Mental Health Center who helps with the street psychiatry team as well as street outreach services. Members of the street psychiatry team will be hosted on DESK’s second floor on State Street. From a mental health perspective, simply having a confidential space will help mental health counsellors help clients, Adu says. On top of privacy, a welcoming first floor––where clients are inclined to stay awhile––will create an environment that might help counsellors develop new connections casually.

“Our role is just being there, engaging with the individuals and not forcing our services on people,” said Adu. “I think we can provide linkages, so it’s not that mental health is necessarily the be-all and end-all. It’s just ‘Oh, okay. Well you’ve identified these [issues]. We can help you with that. But if you’re not ready, that’s fine too.’ We can still engage. We can still meet downstairs, we can sit, have a coffee where you see your peers.”

Executive Director Steve Werlin is overseeing much of the new center’s opening. He talked to me over Zoom from the third floor of the State Street building––though we later met at DESK, where we had one of those clumsy computer-screen-to-reality moments of recognition. Planning began in 2018, but it wasn’t until December of 2020 that the building could be purchased, thanks to pandemic-induced lower real estate prices.

“We started thinking about, well, if we were designing something from scratch what would it look like?” said Werlin of the brainstorm phase. “It would be street level. It would be highly visible, forward-facing, with windows easily visible if you’re walking down the street, easy to find, close to the Green––meeting people where they are both literally in terms of location, as well as physically in terms of everyone’s accessibility.”

While few linger at Center Church, it is the main activity in the new location. Most ask for no more than a cup of coffee before they sit down and start sipping slowly. One client just asks if it would be possible for him to get water, then more water, then three more refills. He also asks for help setting up an email account. He tells me he has been homeless for a year and four months, but he has slept in a hotel with designated rooms converted into two-person shelter spaces during the pandemic. It was his first time visiting DESK’s new space.

“I like this place,” he said, looking past my head at the freshly painted walls behind me. “I don’t have to worry about a roommate here. It’s nice because with a roommate, maybe we don’t get along, or they’re coming in and out, or they’re using.”

Columbus House, a New Haven shelter, will have outreach workers connect with clients on DESK’s first floor. Many shelters, Columbus House included, have moved clients into hotel rooms due to the incompatibility between their usual congregate living arrangements and current public health demands. But during the day, clients must clear from hotels for them to be cleaned, forcing them to seek help elsewhere. Helpful resources, however, are not centralized cohesively in shelters, let alone hotels, let alone New Haven.

One clear-eyed client spoke to me with great enthusiasm about DESK’s new space. He was looking forward to a second floor that could provide services so close to a first floor where he could hang out. He then asked me if there might also be a place to sleep. I had to tell him no.

While the drop-in center’s decor is friendly, the center is also welcoming at a functional level. The center ensures there are as few requirements as possible for those who come to DESK; this includes a policy of not taking down names of clients who visit the center and not limiting services based on apparent sobriety.

With a mirror on the wall to the right of my station, I could see the area behind me by slightly turning my head. Its purpose is to reflect the bathroom door. Although DESK is not a safe injection site or a medical facility qualified to monitor substance use on-site, there are procedures in place to respond to, in the words of Werlin, “the realities on the ground.” Prior to clients’ arrival, both my supervisor and a handout sheet instruct me to knock on the bathroom door if a client is inside for more than three minutes, at which point, if there is no response, I should use a code word to ask a staff member to call an ambulance. There is Naloxone behind the snack table, should a client become unresponsive.

“I think it’s a piece of the puzzle,” said Adu. “It definitely doesn’t solve the entire network, the centralization of homeless services, but it’s a start. And it’s a very important start.”