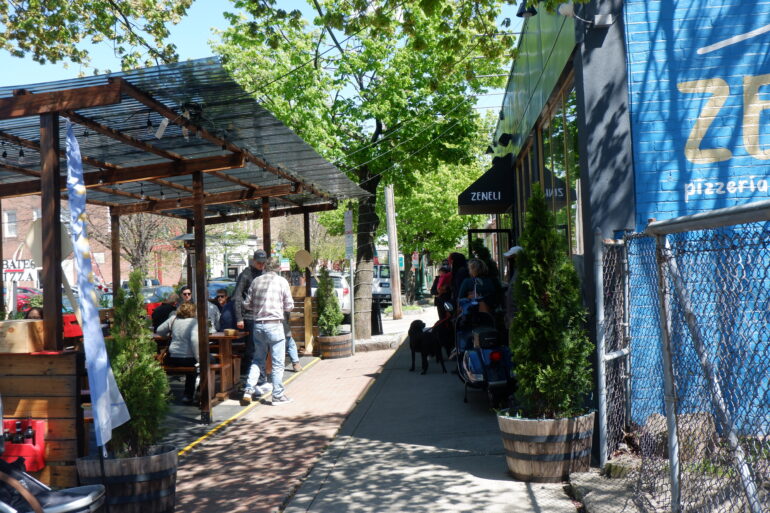 Three-quarters of the way down Wooster Street, past Sally’s Apizza and Frank Pepe Pizzeria Napoletana, sits Zeneli Pizzeria e Cucina Napoletana, a small, one-story storefront with a streetside cabin for outdoor seating during the pandemic. I walked into the restaurant at  10:00 a.m., just as Gazmir Zeneli, the master pizza chef,  arrived to start rolling dough for the day.

“Espresso or cappuccino?” asked his brother, Aleko, whose hospitality made me feel immediately comfortable, as though I were a regular. With a warm cappuccino in hand, I watched Gazmir, a jolly, thirty-or-so year-old man with dark hair and a wide smile, roll the fresh mass of dough into sizable spheres, one for each pie. “We make pizzas one size only—personal. That’s the way it was invented.”

Old-fashioned. Original. Neapolitan. That is how Zeneli bakes its pizzas and distinguishes itself from the rest of the pizza joints on Wooster Street. Gazmir and Aleko, along with their two other brothers Jetmir and Jeshar, are originally from Albania. In the early nineteen-nineties, when communism was collapsing in Eastern Europe, the Zeneli brothers emigrated across the Adriatic Sea to the Naples area of Italy, where they spent their childhoods learning to craft the perfect pizza napoletana. Twenty-two  years later, three of the brothers emigrated again, this time to the United States. “After ten years in New York, we took the opportunity to move to Wooster Street, New Haven—the epicenter of pizza,” Gazmir explained as he started heating up their enormous, gold-plated wood fire oven. “I bake the pizza, my brother Jeshar is the master cheese maker, and my brother Aleko is the people’s person.” Gazmir, who was the previous executive pizza chef at Eataly NY and two-time world champion pizzaiolo, narrated the history of pizza and the experience he and his brothers provide for their patrons: “In 1889, Queen Margherita of Savoy went to Napoli and wanted to see how poor people ate. She was given a pie with tomato sauce, fresh mozzarella, and basil. She loved it. What she ate is what we now call Pizza Margherita, and it is the pizza I bake everyday.”

Growing up in suburban Florida, many of the pizzerias around me were American chains like Domino’s or Papa John’s. The Italian food we think of in the United States is vastly different from the kind of food the Zeneli brothers grew up eating in Naples. Recently, I became curious to learn how Americanization and modernization have impacted the Italian American community in New Haven. Everyone I talked to emphasized two historical developments that have threatened the community: the construction of highways that physically ripped through New Haven’s Italian neighborhoods, and the nationwide Americanization of traditional Italian cuisine.

The two most common routes for a driver into New Haven are interstates I-95 and I-91. Ten lanes each at their widest point, these superhighways converge at an intricate network of ramps, bridges, and overpasses, connecting motorists traveling to and from the Elm City. In the Long Wharf area, these highways stand along monumental structures built to the scale of the American superhighway. The striking, familiar,  blue-and-yellow IKEA sits next to the gray, concrete Pirelli Tire Building, now under renovation. Looming above is the maroon Knights of Columbus tower, Downtown’s tallest building. Eighty years ago, however, this location would be unrecognizable. The colossal scale of the interstates and modern buildings are a product of New Haven’s “urban renewal” campaign led by Mayor Richard C. Lee in the mid-nineteen fifties. It was the age of the automobile, and cities around the country responded with the construction of mega-highways like I-91 and I-95, tearing into neighborhoods like Wooster Square, which was the heart of the Italian American community in New Haven. Forced out, Italians scattered across various suburbs, weakening the tight-knit community they’d been building for decades.

“I remember my mother telling me Franklin Street, where I was born, was destroyed, along with everything else,” Ed Surato, a 65-year old librarian at the New Haven Museum, told me. “People to this day are very upset with Mayor Lee and New Haven redevelopment. I can tell how much has drastically changed by looking at photos and maps. There are buildings still standing [in the affected areas], but they’re in much disrepair.” According to Anthony Riccio, New Haven historian and self-proclaimed “people archaeologist,” Wooster Square “triggers nostalgia, a certain feeling for history. All the other neighborhoods are destroyed and changed. Everyone moved to East Haven, North Haven, Guilford, and other suburbs. There aren’t many people from the original neighborhood left. But everyone comes back to Wooster Street, because it’s the only visible vestige of the Italian American heritage.”

Suburbanization in response to urban renewal was not the only factor that diluted the traditional Italian community in New Haven. “Everything changed,” Riccio emphasized, his dog barking in the background of the Zoom call, “when American corporations became involved in hijacking Italian food, reprocessing and feeding it to Americans.” Riccio, author of The Italian American Experience in New Haven, grew up in New Haven in the nineteen-sixties and nineteen-seventies . He told his own family history and discussed how his grandparents’ meager diet differed greatly from the conglomerates—like Papa John’s or Olive Garden— most Americans today associate with Italian food.

In the early twentieth century, Riccio’s grandparents immigrated from southern Italy to the Annex neighborhood of New Haven. The area was mostly rural at the time with “open land for farming,” according to Riccio. In addition to their manufacturing day jobs, Riccio’s grandparents were farmers. “They needed food on the table,” Riccio explains. “They didn’t make money in the nineteen-twenties  or nineteen-thirties. They grew their own tomatoes, made their own wine, hung their own sausage, and made their own lard in the cellar… You didn’t waste anything, because what you grew is what you ate. My own diet growing up was old-world, plant-based, and Mediterranean— food with greens, beans, and lentils.”

By contrast, Italian food in the U.S. transitioned in the mid-twentieth century to Americanized cuisine built on convenience, variety, and capacity for mass production. Canned ravioli, frozen pizza, prepared tomato soup, and other ready-made food products introduced at the time shaped Americans’ conception of Italian cuisine. Riccio insists that the Americanization of Italian food, specifically brands like Chef Boyardee, became much more popular than the simple Mediterranean diet he was used to eating at home. “Those processed foods that everyone eats now is not what we ate. Simplicity… simple flavors are the best for you and taste the best. Now, it’s a mania.”

“In America, you have to think big,” said Aleko Zeneli. That’s posed a challenge to their standard of serving the finest, original Neapolitan pie. “Everyone here is used to so many options, so much advertising, that people lose the taste for simplicity.” The Zeneli brothers insist that their customers try their pizza as it appears on the menu, without extra toppings, to taste the authentic Neapolitan flavor. “If they really want to sprinkle parmesan or red pepper flakes, like they do here in the U.S., at least make them try the pizza as it is to see if they like the flavor of our pies,” said Aleko. With all the change Italian cuisine has faced in the U.S. in the past century, Zeneli is all about preserving the old-fashioned, Neapolitan pizza tradition, just the way Queen Margherita tried it in 1889. “If you haven’t tried this pizza, you haven’t tried pizza,” Gazmir chuckled, as he pointed behind me toward an elderly man sipping red wine with a friend. “Just ask him,” Gazmir told me. “He comes in every morning.”

The man’s name was Bill Iovanne, 88-years old and the long-time owner of Iovanne Funeral Home on Wooster Place. Even though the business is now run by his son, Bill has chosen to remain in Wooster Square. Sipping his wine, he radiated with nostalgia as he told me how much he loved growing up in the neighborhood. “Wooster Street to me is unbelievable,” he said. Bill was born in 1933 in Fair Haven, but soon after his family moved to Wooster Square. “I thought everyone was Italian here. The shops, the churches, the schools, all of them.”

“People moved out gradually, to East Haven, North Haven, Branford, all over. But this street, Wooster Street, has stayed the same.” No matter how far away the descendants of  New Haven’s Italian immigrants may have moved, Wooster Street still serves as the meeting point for families and friends to gather and eat classic New Haven food. “I’ll never leave here,” Bill reassured me. “I just love it.”

—Frank Lukens is a sophomore in Ezra Stiles College